"For the month, I set aside my ethics and my morals and instead just floated along in the breeze of consumerism." 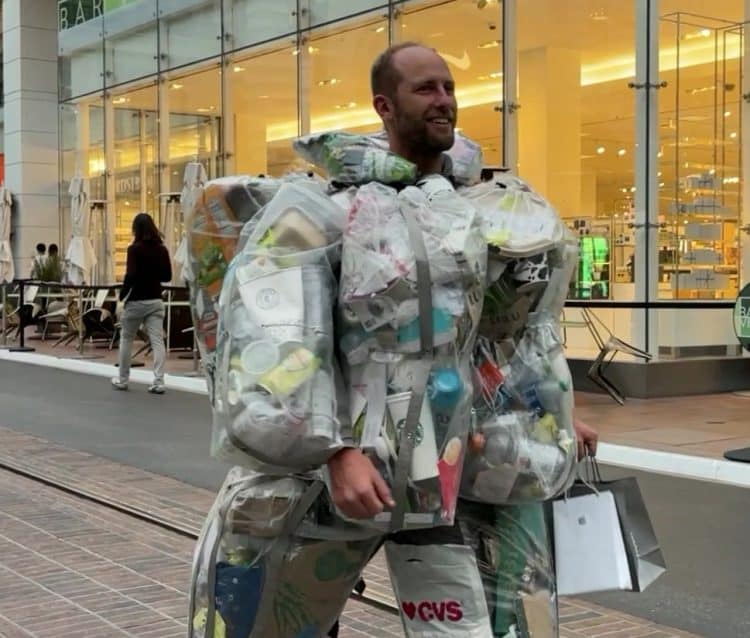 An eco-activist has worn all his own rubbish for an entire month – to show how much waste one person creates.

Rob Greenfield, 35, wanted to create a visual that would help people understand their trash footprint.

So, for 30 days, starting on April 20, Rob lived just like the average US American – but wore every piece of rubbish he created.

This would equate to roughly 4.5lbs (2kg) of trash per day – which most people don’t think twice about before disposing of.

To complete the ’30 Days of Wearing My Trash’ campaign, Rob had an expandable plastic suit specially made that expanded with each piece of rubbish it was filled with.

Rob an Asheville, North Carolina resident, said: “The project was all about waking people up and trying to enact change.

“Most of us are unaware of how much trash we create every day, so this was a way of visually getting the message across.”

Attached to his arms, legs, shoulders and torso, the suit was made up of cups, bags, boxes, cartons and other discarded items that he used throughout the month.

Rob wore shorts and a t-shirt underneath the suit each day, and would only remove it when relaxing in his own home or to get into a car.

The rest of the time he was either out engaging with the people on the streets of Los Angeles, or running personnel day to day errands.

To deal with the smell, Rob cleaned all the items of rubbish before adding them to his suit, but it was the heat he found most uncomfortable.

After 27 days of packing on the pounds, Rob claimed that his suit weighed at around 62lbs (28kg), and that resultant junk was making it increasingly hard to walk.

Rob said: “I try to live a near zero-waste life. I go to extreme measures to create as little garbage as I possibly can.

“But for the month, I set aside my ethics and my morals and instead just floated along in the breeze of consumerism.

“For most people, trash is out of sight, out of mind – we throw it away and we never think about it again.

“It was about day 12 that I started to really feel the burden of consumerism.

“The heat was really uncomfortable at times, and towards the end the weight was really adding up.

“But it was all worth it in the end and I felt so happy to have completed such an awakening project.

“Hopefully many of the people I came across will now think twice about the amount they are throwing away.”