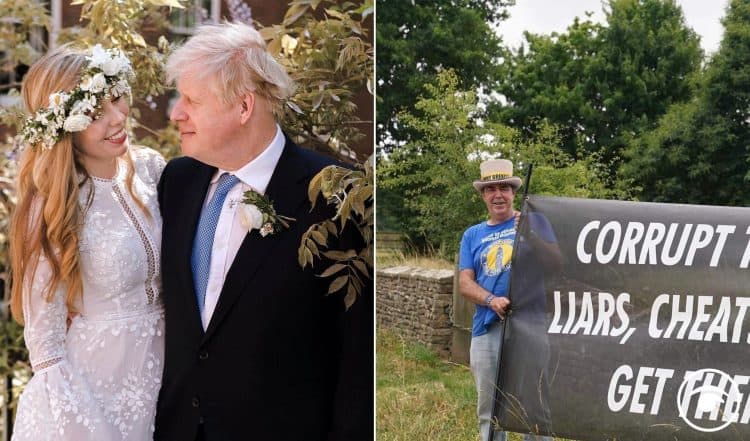 Boris and Carrie Johnson celebrated their wedding at the grand Cotswolds estate of a major Tory donor with guests including staunch loyalists Jacob Rees-Mogg and Nadine Dorries.

The outgoing Prime Minister and his wife hosted family and friends at 18th-century Daylesford House to celebrate their nuptials in a wider circle, after the pandemic forced them to scale back festivities last year.

The thrice-wed groom’s 81-year-old father Stanley Johnson and sister Rachel Johnson were there to mark his latest marriage, while Australian actor Holly Valance was also seen pulling into the estate.

The event was being held in a huge white marquee on the expansive landscaped grounds of Daylesford House in Gloucestershire.

The Grade I-listed mansion is owned by Lord Bamford, chairman of construction equipment manufacturer JCB, who has donated millions to the Conservatives.

Steve Bray on the guestlist?

No of course he wasn’t but he took a trip down to the site and did what he does best.

He also claims that a fellow protestor was arrested, more of that further down.

He tweeted the following unsubstantiated, at this time, claims about Sylvia.

Cummings: Remainers need to drop their sense of moral superiority