"Absolutely disgusting behaviour, this should not be happening in this day and age." 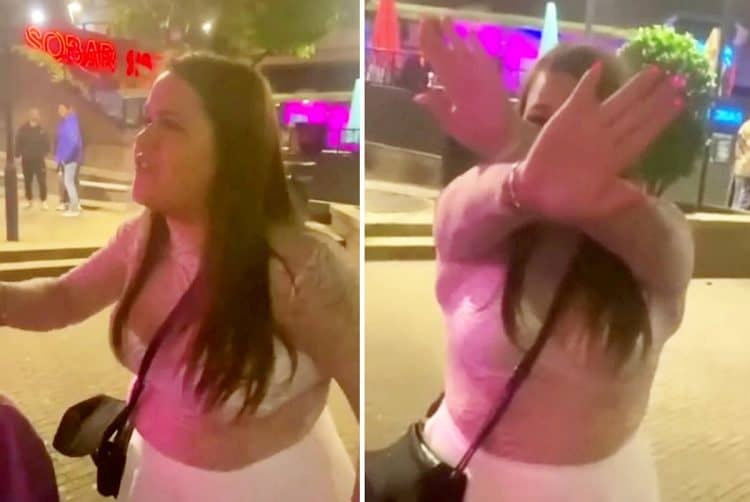 Shocking footage shows the moment a woman hurled vile racist insults at a bouncer after being thrown out of a bar in Birmingham.

Tia Simmonds, 21, was captured on camera launching a foul-mouthed tirade at security staff outside Levana Bar at the city’s Arcadian entertainment complex.

She can be seen angrily confronting the bouncers outside the cocktail bar and shouting: “F***ing suck your mother. You’re a f***ing p**i bruv.”

She also appears to call one of them “a crackhead” before putting her hands up to cover her face when she realises she was being filmed.

A security guard tells her “carry on, you’re going viral” to which barmaid Tia replies: “I don’t care” before continuing her rant last Thursday (21/10).

The 45 second footage, which was obtained by Birmz Is Grime, has since gone viral with tens of thousands of views after being uploaded to social media last week.

West Midlands Police said they were aware of the video but had not been called to the incident.

She was filmed calling bouncer Tristan Price a “n*****” and spitting at him during a racist outburst outside The Figure of Eight Wetherspoons on May 22.

Walker, of Worcester, pleaded guilty to racially aggravated common assault at Birmingham Magistrates’ Court last month and is yet to be sentenced.

Social media users called on police to also take action against the latest racist outburst although no arrests have been made.

One web user commented: “Why are the police not involved in this, this should not go unpunished.”

Another added: “Absolutely disgusting behaviour, this should not be happening in this day and age.”

A third person wrote: “She should be ashamed of herself. This is just appalling. Nobody deserves that when they are just trying to do their jobs.”