“People are going to be driven into poverty. The people being asked to absorb the price rises are the people at the bottom.” 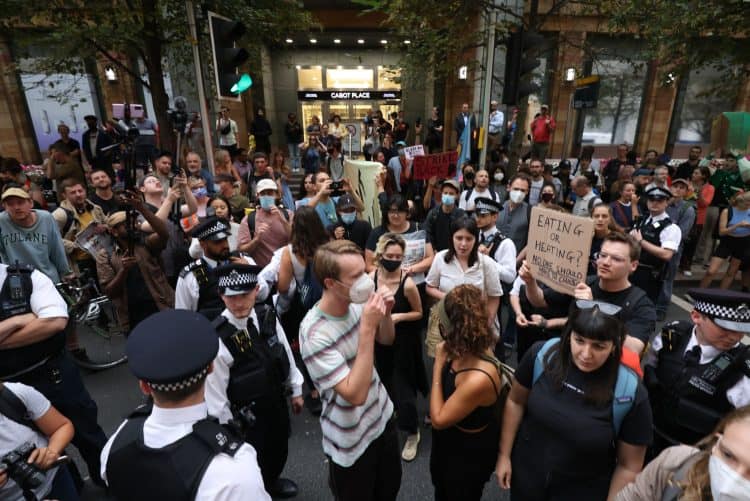 Around 100 protesters gathered outside Ofgem headquarters in London on Friday urging consumers to withhold payment for “astronomical” energy price hikes they could not afford.

Members of the crowd shouted “enough is enough” and held banners reading “Freeze profits, not people” on the street in Canary Wharf in London.

The demonstration was promoted by Don’t Pay UK, a grassroots movement describing its aim as “building a mass non-payment strike of energy bills starting on October 1”.

Tracy Baldwin, 52, said deaths caused in part by the price hike were inevitable and would be “nothing short of corporate manslaughter”.

Ms Baldwin, a carer from Yorkshire, said: “The price hikes are astronomical. There’s going to be deaths from the vulnerable, the disabled, the elderly.

“Ofgem are not doing anything to tackle the problem. When people start to die it’s going to be nothing short of corporate manslaughter.”

Teacher Jamie Grey called for “hitting them where it hurts, withdrawing our financial support for a barbaric regime of energy companies that have put profit before people”.

Below the poverty line

The 34-year-old, from Tower Hamlets, said she teaches children who are already living below the poverty line whose families would be unable to stay warm this winter.

She added that Ofgem “don’t care about us at all” and said vulnerable people would die over the coming months as a result of the cost-of-living crisis.

“Ofgem don’t care about us. All we have is each other – historically we know mass non-payment and mass movements do work,” Ms Grey said.

Protester Tony Cisse said: “People are going to be driven into poverty. The people being asked to absorb the price rises are the people at the bottom.”

He warned costs would come back to customers in the long run if companies were to fail.

Speaking to Channel 4 News, Mr Brearley said: “The price cap was designed to do one thing, and that was to make sure that unfair profits aren’t charged by those companies that buy and sell energy. And, right now, those profits in that market are 0%.

“What it can’t do is it can’t say, given the cost of the energy, that we can force companies to get from customers less than it costs to buy the energy that they need, because otherwise they simply can’t buy the energy for those customers.”

A former vice president of BP said the latest cap should be suspended and called for taxes to be increased on oil producers if they are not facing “real costs”.

Nick Butler, who worked for the company for 30 years, said he did not think the Ofgem cap should have been announced with no “modification or mitigation”.

He told BBC Scotland’s The Seven he believed some energy companies were “milking the system” and that those who could not prove they faced real supply costs should see a tax hike.

“(Some) people, I think, are milking the system and that’s why I absolutely believe this has got to be made a transparent market, and the good companies will welcome that transparency because it will restore an element of the trust that has been lost,” Mr Butler said.