One NHS nurse said: “I’m basically on my hands and knees, begging," for the govt to allow refugees to come to UK to stay with her. 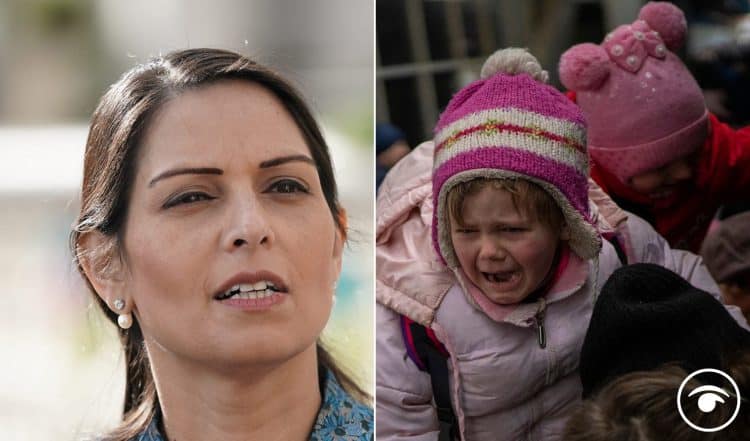 The home secretary apologised “with frustration” after coming under fire over “delays” in the time it is taking for Ukrainian refugees to arrive in the UK.

Priti Patel denied visa requirements and checks are slowing the process and causing delays, insisting the UK will “absolutely see changes in numbers” as work continues.

Around 12,000 people had arrived in the UK under Ukraine visa schemes as of Tuesday, according to Home Office figures.

Some 10,800 people had arrived under the Ukraine family scheme but only 1,200 had made it to the UK as part of the Homes for Ukraine sponsorship scheme, provisional data published on the department’s website shows.

One NHS nurse said she is on her “hands and knees, begging” as she waits for her Homes For Ukraine application to be processed.

Lauren Corbishley, 43, an NHS nurse from Dawlish in Devon, applied to the scheme on March 18 to bring three members of a Ukrainian family to the UK.

In an interview with the BBC’s Mark Easton, Patel said that while the scheme has “taken time” she insisted that “any new scheme takes time.”

However, the reporter wasn’t going to let that go and pushed Patel further on the point and asked if she would be willing to apologise for the delays.

“There is huge frustration out there. Your refugees minister has apologised for unacceptable delays. Will you?”

Patel replied: “I apologise with frustration myself,” but then added: “We’ve got hundreds of Home Office staff doing visa applications, processing on the ground, providing support.”

He then accused Patel of boasting about a surge of staff supporting the Ukrainian refugees being processed to be allowed in the UK and informed her he had actually visited Calais himself. As you will see what he claims he saw is very different to Patel’s take.

“People say it’s not good enough – you boasted about a surge of staff to Calais to support the Ukrainian refugees who had arrived there.

“I went there, it was two guys, a table and some crisps,” Easton said, leaving the viewer to wonder what on earth has been going on.