Watch: Police warn apparent anti-royalist for holding up a blank piece of paper

Since the proclamation of King Charles III, arrests have been made and protesters have been moved on in London, Scotland and Oxford. 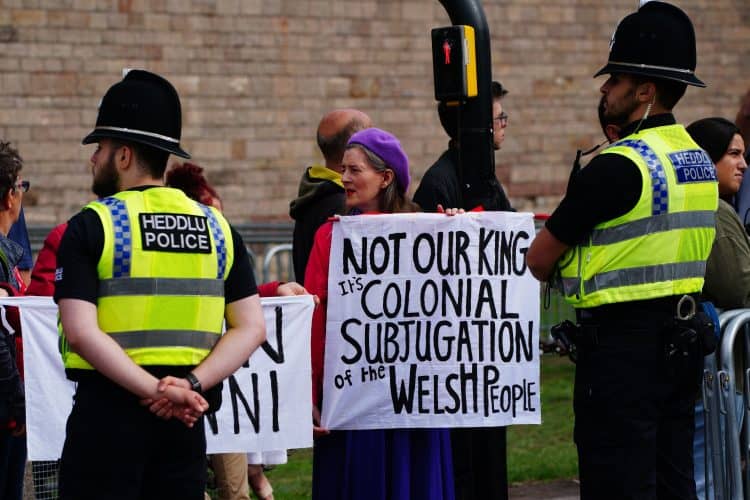 People “absolutely have a right to protest” against the monarchy following the death of the Queen, police have said, but this doesn’t seem to fully add up.

Since the proclamation of King Charles III, a few arrests have been made and protesters were moved on in London, Scotland and Oxford.

The Metropolitan Police issued a statement following a viral video from Parliament Square in central London, when a barrister who was holding up a blank piece of paper was asked for his details by an officer.

Paul Powlesland, 36, a barrister and nature rights activist from Barking in east London, had travelled into the centre of the capital on Monday afternoon with “a blank piece of paper”.

“Why would you ask for my details?” he can be heard asking the officer in a video, who said: “I wanted to make sure you didn’t have bail conditions (inaudible).”

The officer replied: “You said you were going to write stuff on it, that may offend people, around the King. It may offend someone.”

Mr Powlesland said the officer told him he risked being arrested if he wrote “not my King” on the paper.

“Just went to Parliament Square & held up a blank piece of paper. Officer came & asked for my details. He confirmed that if I wrote ‘Not My King’ on it, he would arrest me under the Public Order Act because someone might be offended,” Paul Powlesland tweeted.

Powlesland attached a video of the encounter.

And followed up with this.

He then shared a video of the police officer