“Irresponsible and dangerous sabre-rattling and reckless rhetoric from unionist politicians has seen tensions rise right across the community.” 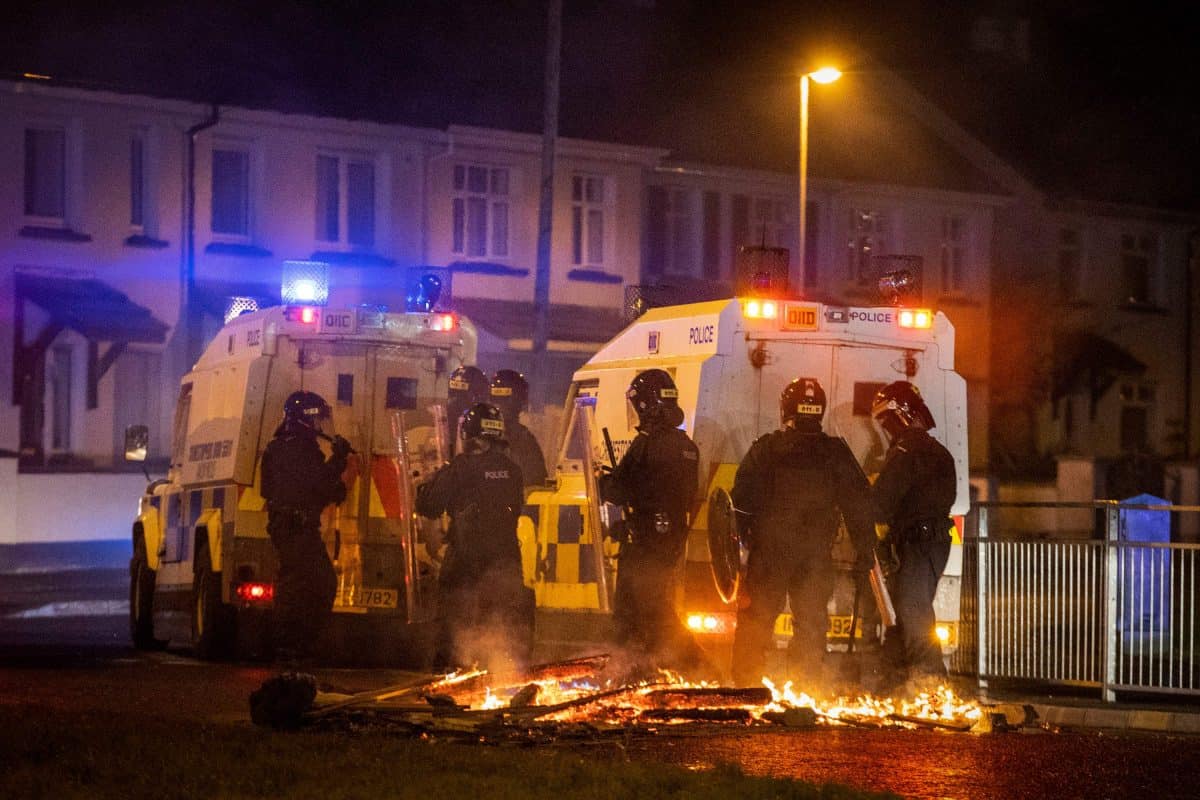 Police were attacked during another night of violence and disorder in a number of loyalist areas in Northern Ireland on Monday.

Further unrest swept across parts of Carrickfergus and Londonderry, with petrol bombs and other missiles thrown at officers.

Cars, a JCB digger and a phone box were set alight in the Waterside area of Londonderry.

Officers from the PSNI Tactical Support Group (TSG) attended the loyalist Nelson Drive Estate, where a group of youths clashed with police.

The surrounding roads were blocked with fires and barricades.

On 4th April Guardian Brexit correspondent, Lisa o’carroll Tweeted: “Northern Ireland police appeal for calm after cars set on fire in Newtownabbey and fourth night of riots in loyalist area in Derry and disturbances in Belfast. 27 police injured. Protests relate to Sinn Fein presence at a funeral in lockdown + Brexit.”

Northern Ireland police appeal for calm after cars set on fire in Newtownabbey and fourth night of riots in loyalist area in Derry and disturbances in Belfast. 27 police injured. Protests relate to Sinn Fein presence at a funeral in lockdown + Brexit https://t.co/aTqwff6oiy

Elsewhere, petrol bombs were thrown at police officers in Carrickfergus, near Belfast.

A crowd of young people gathered in the North Road area and lit a fire in the middle of the road.

Petrol bombs were sporadically thrown at police, according to witnesses.

Earlier, the PSNI had appealed to community leaders to put a stop to the disorder that has taken place throughout much of the last week.

On Monday afternoon, a group of masked loyalists marched through the streets in towns across the region, including Portadown, Ballymena and Markethill.

The PSNI are investigating those marches, which appear not to have been notified to the Parades Commission.

It follows a turbulent week of events in Northern Ireland, as loyalist tensions boiled over into violence.

Five officers were injured after police were pelted with petrol bombs and masonry in Newtownabbey and Carrickfergus, near Belfast, on Sunday night.

It takes the total number of police injured in incidents in Londonderry and Belfast over the Easter weekend to 32.

Petrol bombs have been thrown at PSNI officers and bins and pallets set on fire in disturbing scenes in Belfast and Derry in recent days.

“We’re there and we’re doing that. I will have additional resources available to me and we will respond to whatever may develop.

“But there’s an opportunity to stop this. This doesn’t have to be a third night of trouble in the Cloughfern and Newtownabbey/Carrickfergus area.

“I would encourage people with influence in those communities to put a stop to this.”

“I believe that there’s a small group of disaffected criminal elements that are clearly involved in influencing young people, and I would appeal to young people in those areas not to allow this to happen,” he said.

“I think it’s also fair to say that there’s probably no coincidence to this. We have been successful in that area in respect on some of these criminal gangs.

“So I think that this perhaps has been a reaction from some of those people who are involved in criminality.”

Asked if he thinks the South East Antrim UDA are behind the attacks, he replied: “As I said, I believe that this is a group of disaffected criminal gangs and we will investigate that.

Mr Davy said the PSNI will be engaging with the local community, councillors and representatives “to try and put a stop to this”.

On Monday night, a masked loyalist band marched through the streets of Portadown, playing drums and flutes and waving flags.

Sinn Fein MLA John O’Dowd condemned the march, which he said was intended to intimidate the local community.

He said: “Tonight’s so-called band parade in Portadown was led by masked men through the streets, reminiscent of the scenes recently in Pitt Park in East Belfast when a loyalist mob went on a rampage to intimidate families out of their homes.

“Irresponsible and dangerous sabre-rattling and reckless rhetoric from unionist politicians has seen tensions rise right across the community.”

Similar marches took place in Markethill and Ballymena throughout the day.

It raised questions as to whether these events were notified to the Parades Commission, as is required by law.

Children as young as 12 were involved in some of the incidents that took place over the weekend, police said.

Tensions have soared within the loyalist community in recent months over post-Brexit trading arrangements, which it is claimed have created barriers between Northern Ireland and the rest of the UK.

Related: Police attacked during another night of loyalist disturbances in Northern Ireland