Tensions have soared within the loyalist community in recent months over post-Brexit trading arrangements which have been claimed to have created barriers between Northern Ireland and the rest of the UK. 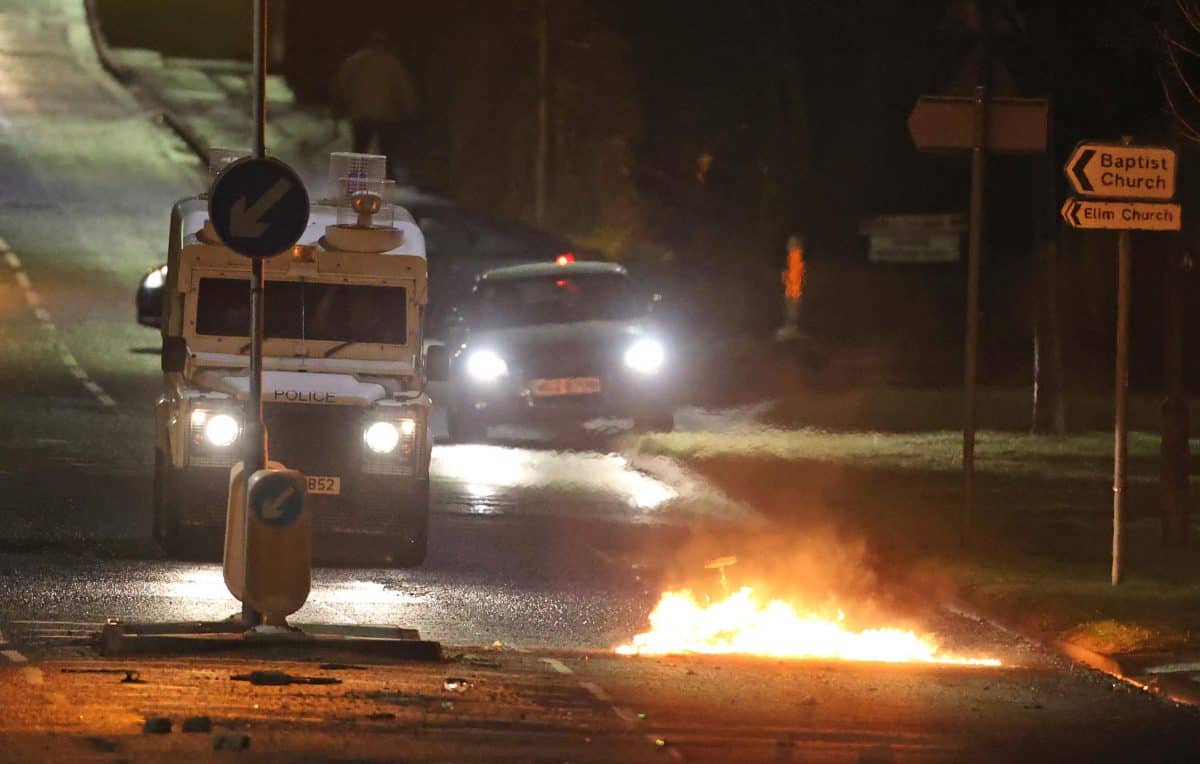 Police have come under attack as violence flared during another night of sporadic disorder in parts of Northern Ireland.

Petrol bombs and bricks were thrown at officers in loyalist areas in Newtownabbey and Carrickfergus on Sunday night.

It was the second night in a row that trouble broke out at the Cloughfern roundabout in Newtownabbey on the outskirts of Belfast, although the violence was not as prolonged as on Saturday night.

There was also disorder in the North Road area of nearby Carrickfergus on Sunday night.

A reminder that the DUP campaigned for Brexit and propped up the Conservatives (who otherwise didn’t have a majority) while Johnson secured the deal that led to the ‘border in the Irish Sea’. https://t.co/mKJpjz5aHt

On Saturday, 30 petrol bombs were thrown at officers in Newtownabbey in what police described as an “orchestrated attack”.

On Friday, there were violent scenes in the Sandy Row area of Belfast as well.

While in Londonderry, police have been subjected to sustained attacks across several nights in the last week in loyalist areas of the Waterside part of the city.

Tensions have soared within the loyalist community in recent months over post-Brexit trading arrangements which have been claimed to have created barriers between Northern Ireland and the rest of the UK.

Meanwhile in Co Antrim, a recent series of drug seizures against the South East Antrim UDA – a renegade faction of the main grouping – have caused particular ill-feeling towards police.

The faction is believed to have been behind some of the weekend disturbances.

Mr Beck said it was an “orchestrated attack on police”.

“We are living in unprecedented times, dealing with a global pandemic, no-one needs the added pressure of disorder in their community,” he said.

“I would appeal to those who are taking to the streets to stop immediately, their actions are causing nothing but harm and distress to the very communities they claim they are representing.”

On Sunday evening the PSNI announced that a 47-year-old man has been charged in connection with rioting, and throwing a petrol bomb in Newtownabbey on Saturday.

He is due to appear at Belfast Magistrates’ Court on Monday April 26.

Seven people had already been charged after the disturbances in the Sandy Row area, with four adults – three men aged 25, 21 and 18 years old, and a woman aged 19 – have been charged with riot.

Three teenagers, aged 17, 14 and 13, have also been charged with riot and are due to appear at Belfast Youth Court on April 30.

Nuclear-Powered Batteries Could Generate Power For Thousands of Years