“It's one rule for us, and a completely different rule for any Tory MP. What a surprise!” 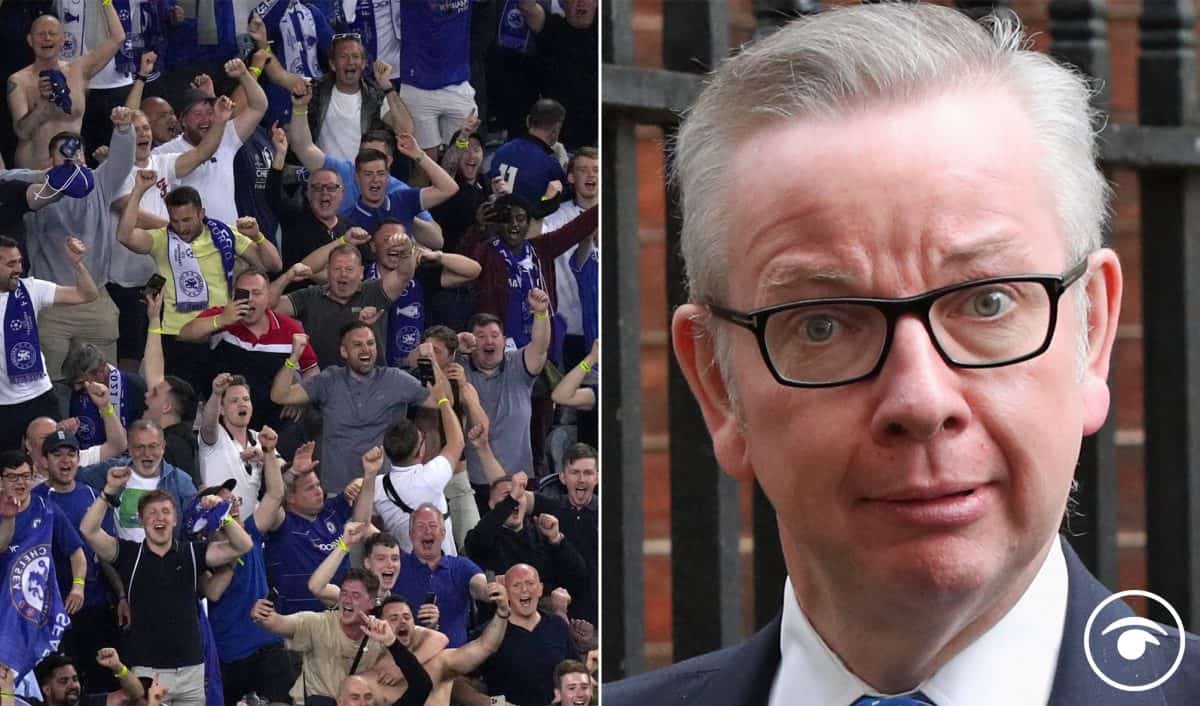 Michael Gove is set to avoid self-isolation rules despite having come into contact with someone who tested positive for Covid-19.

As part of a new pilot scheme for workplaces, the chancellor of the Duchy of Lancaster will be able to skip the normal 10-day quarantine period, and instead take a Covid test every day for a week.

Gove received an alert from the NHS app less than a week after a trip to Portugal to attend the Champions League final, an event attended by more than 12,000 people.

It is believed that the former education secretary’s exposure to someone with the virus could have occurred during the match between Chelsea and Manchester City last weekend.

Due to meet the first ministers of Wales, Scotland and Northern Ireland, the Daily Mail reported Mr Gove had received the alert during a meeting at Downing Street with Boris Johnson, which he immediately left.

‘One rule for you’

During an interview with housing secretary Robert Jenrick, temporary Good Morning Britain host, Richard Madely, condemned Mr Gove’s inclusion in the new scheme, suggesting it amounted to “one rule for you, and another for us”.

He said: “Forgive me for my cynicism, but you talk about caution – how is it your cabinet colleague Mr Gove has been pinged on track and trace and yet like the rest he doesn’t have to isolate, he’s just doing tests?

Mr Jenrick replied: “Well, I haven’t spoken to Michael so I don’t know all of the details exactly what’s happened to him.

“It sounds like the system worked. He went to a country on the green list, he then pinged, he’s self isolating and will be doing testing – so that’s encouraging.

But Mr Jenrick appeared unaware that Mr Gove was partaking in the workplace pilot scheme, telling BBC Breakfast that the chancellor of the Duchy of Lancaster was in fact “self-isolating and testing regularly.”

Only later did he tell Good Morning Britain that Mr Gove was in-fact involved in the pilot scheme.

“He’s taking part, as I understand it, in a pilot where people can have other circumstances to otherwise, but I’m sure he’s taking all the necessary cautions.”

The news has attracted a barrage of criticism on social media, with many branding it “one rule for them”.

One user tweeted: “So, Michael Gove gets to take his son to the football in Portugal and Portugal is then added to the amber list once they’re home. Interesting.”

Another tweeted: “It’s one rule for us, and a completely different rule for any Tory MP. What a surprise!”

A football fan who returned to the UK on the same flight as Mr Gove told Sky News that he had also been contacted by the NHS app and was told to isolate until Sunday 6 June – 10 days after the final.

It comes on the same day as the government announced that Portugal will move from the green list to the amber list, a move that will see travellers returning from holiday destinations forced to quarantine upon entering the UK.

Speaking to BBC Breakfast, the transport secretary, Grant Shapps referenced rising cases and a new Covid strain identified in Portugal, adding that ministers did not want to take risks before the final easing of lockdown restrictions on 21 June.

The Department for Transport (DfT) said the measures are being implemented “to safeguard public health against variants of concern and protect our vaccine rollout.”

No new destinations were added to the green list in the first review of England’s traffic light list for international travel, which is due to be examined again on 28 June.

Meanwhile, seven countries – Afghanistan, Bahrain, Costa Rica, Egypt, Sri Lanka, Sudan and Trinidad and Tobaga – have been added to the red list from the amber list.