Straight-A pupil Anam Ahemdi, 16, took time out of her Summer holidays to urge the ex-Foreign Secretary to apologise for "letter box" remarks 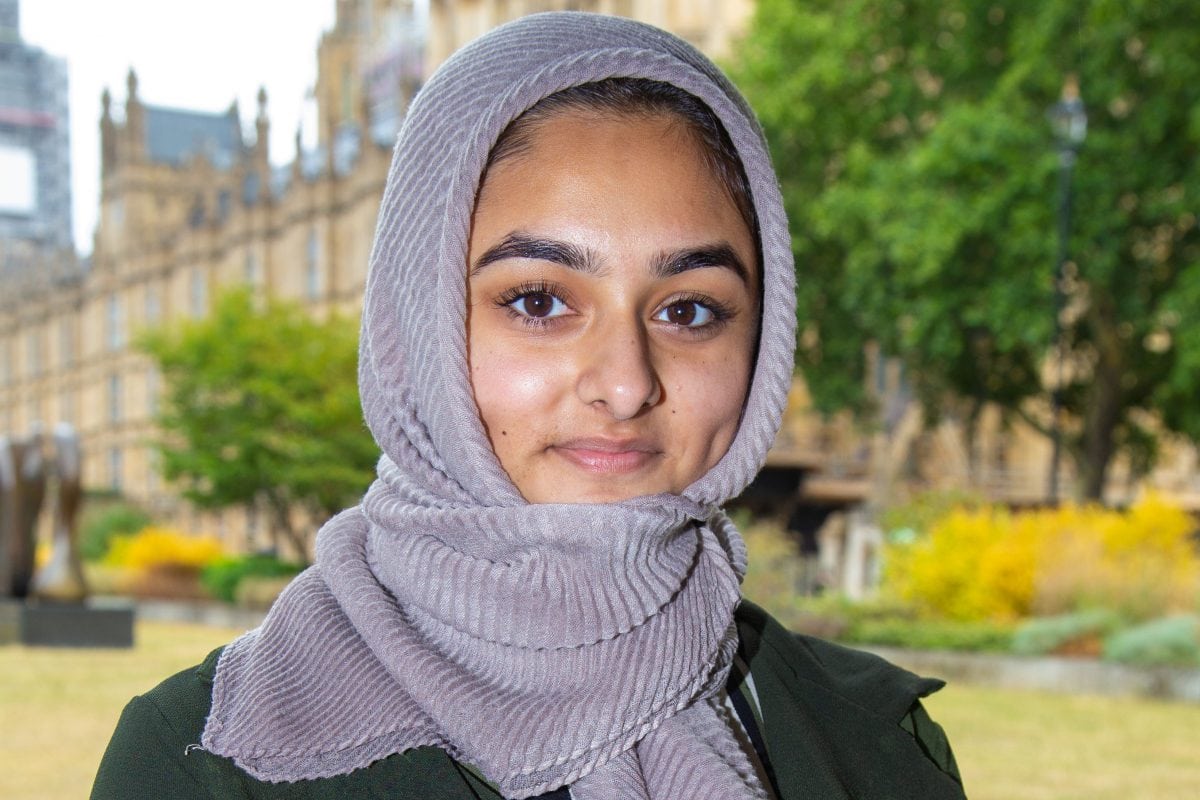 A Muslim schoolgirl today (Fri) travelled to Westminster to deliver an open letter to Boris Johnson slamming him for his “obnoxious” burka remarks.

Anam, a straight-A student who has just finished her GCSEs, travelled from her home in Birmingham to London to deliver her letter to Johnson’s office.

In the 1,052-word letter, she says Johnson’s comments were “obnoxious” and “sickening” and urged him to apologise immediately.

Anam, a pupil a King Edward VI Handsworth School for Girls, doesn’t wear a face veil herself but does wear a headscarf.

In her letter, she said: “We live in an age of acceptance of all kinds of people from all walks of life.

“We live in a country where individuals from diverse cultures and those who have different beliefs are celebrated rather than attacked.

“Why, then, did it dawn upon you that it would be a perfectly good idea to mock the physical appearance of a traditional veil, a veil that dates back to before Islam even came about?”

Taking aim at Johnson’s personally, Anam tells him: “You of all people should know not to ridicule physical appearances; you have been at the centre of many political jokes and most of them have been about your appearance!” 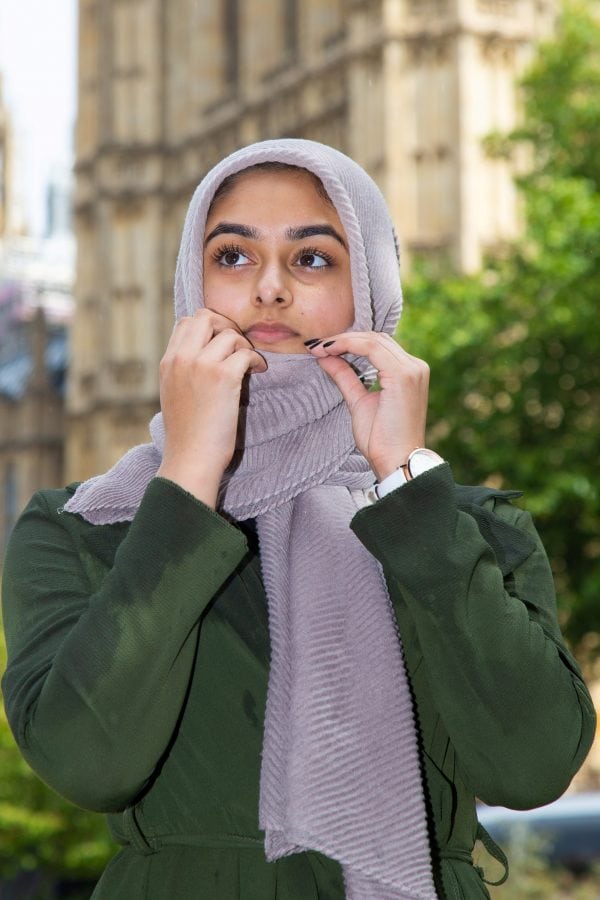 Anam, who belongs to the Ahmadiyya Muslim Community, said she penned the letter after listening to a radio news report about the row.

She said: “I decided to write a letter to Mr Johnson after hearing what he had said about Muslim women who wore a burka or niqab.

“I have to say I was sickened by it and hypocrtitical.

“He attended a 2012 peace symposium and was saying all these heartfelt things that he completely goes against.

“It was really insensitive, and very immature of him. 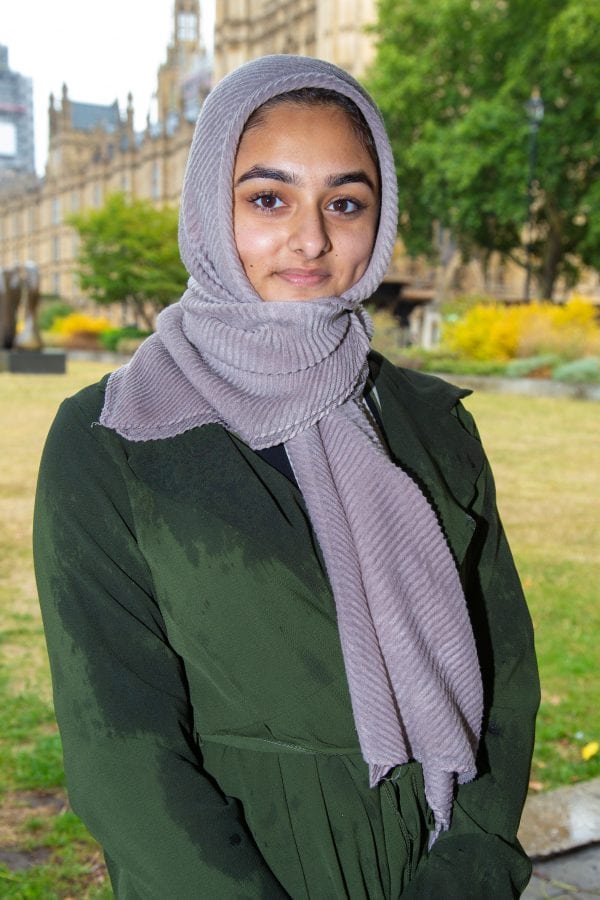 “I thought to myself ‘I’ve got to do something about this. I want to make him apologise. He must understand the consequences of his words.’

“I got home and just went up to my room and started writing.

“I spent around four hours researching and writing the letter. I wanted to back my arguments and points with research and evidence.

“Even though I don’t wear a burka I really believe women who do should be free to choose and make their own decisions.”

After delivering the letter to his offices, Anam added: “I really do hope he reads it.

“Initially it was meant to be just for him, but I thought it would be better for the public to see younger people are unhappy with what he was saying.

“Hopefully he will change his comments in future. He should apologise for what he has done.”

Anam lived with her parents, dad Waqar, 39, and mum Wajeeha, 36, and her two brothers.

Mum Wajeeha, a primary school teacher who accompanied Anam to London, said: “If someone makes a comment about a woman’s attire it is important for a woman to respond, especially a young woman.

“My mum wears a face veil but I’m a teacher and wearing a face veil would be very difficult.

“Everyone wants to express their modesty in different ways. I wear a headscarf – I cover up to my chin.

“Our country teaches us no one should force you to believe anything you don’t want to.”

My name is Anam Ahmedi and I am 16 years of age. I belong to the Ahmadiyya Muslim Community.

I would like to begin my letter by expressing my utter disbelief and total astonishment when I discovered the disgusting manner in which you described women who wear a niqab.

What strikes me as odd is the fact that you actually opposed the new “burqa ban” in Denmark, yet you still proceeded to compare women who wear a niqab to “letterboxes”, “bank robbers” and “rebellious teenagers”.

Moreover, you obnoxiously used the words “bizarre” and “unattractive” to describe the niqab and burqa.

I would like to point out that women who wear a niqab or burqa do not do so for you to be attracted to them or for your personal enjoyment, Mr Johnson, but it is in fact for the opposite reason.

Therefore, I would like to advise you to please think before you make such sickening comments in the future.

As you may already know, Mr Johnson, we are currently living in the 21st century.
We live in an age of acceptance of all kinds of people from all walks of life.

We live in a country where individuals from diverse cultures and those who have different beliefs are celebrated rather than attacked.

Why, then, did it dawn upon you that it would be a perfectly good idea to mock the physical appearance of a traditional veil, a veil that dates back to before Islam even came about?

Mr Johnson, you of all people should know not to ridicule physical appearances; you have been at the centre of many political jokes and most of them have been about your appearance!

Surely this should have made you more aware about your choice of language when describing others and the way they choose to look?

Furthermore, you described yourself to be “fully entitled” to tell a constituent who comes to you for advice or assistance to remove her veil so you can “speak to her properly”.

Well actually, Mr Johnson, you have no entitlement whatsoever to dictate how someone chooses to present themselves, Muslim or not.

Imagine someone disagreeing with your physical appearance and the way you dress and then suddenly feeling entitled to control the way you look whilst talking to them.
Does that sound fair?

I would like to also point out that women who wear a niqab or burqa are entirely cooperative when it comes to following the law of the land, for example with showing their full faces for passport photos.

It is then up to the woman as to how she would like other people around her to see her.
As I briefly mentioned before, the veil that covers the face existed long before Islam.

Mr Johnson, I read that you became an Anglican in your youth. Anglicans base their Christian faith on the Holy Bible.

Therefore, I am sure you will be familiar with the fact that the veil covering the face has been worn by influential females prior to Islam as well.

An example of this would be in Genesis 24:65, where Rebekah (wife of Isaac and mother of Jacob and Esau) is stated to have “covered her face with a veil” when Isaac, at which time she did not know him, was approaching her and his servant.

This shows that the veil has helped keep up a standard of modesty for thousands of years, which is the reason why many Muslim women may choose to wear a burqa or niqab.

Similarly, in the New Testament, women are commanded to cover their heads (1 Corinthians, 11:4-7).

You claimed that you couldn’t find any “scriptural authority for the practice” in the Holy Qur’an.

Well don’t worry, Mr Johnson, because I have found a particularly helpful reference for you.

In Chapter 24 Verse 32, it states: “And say to the believing women that they restrain their looks and guard their private parts, and that they display not their beauty or their embellishment except that which is apparent thereof.’

This Qur’anic verse advises “believing women” to present themselves in a state of modesty in front of others, and it is up to the Muslim woman to decide how she does this.

This is why you may see Muslim women all over the world wearing their headscarves/veils differently to one another, as I believe that God gives us a choice as to how we feel most comfortable keeping our appearances modest. 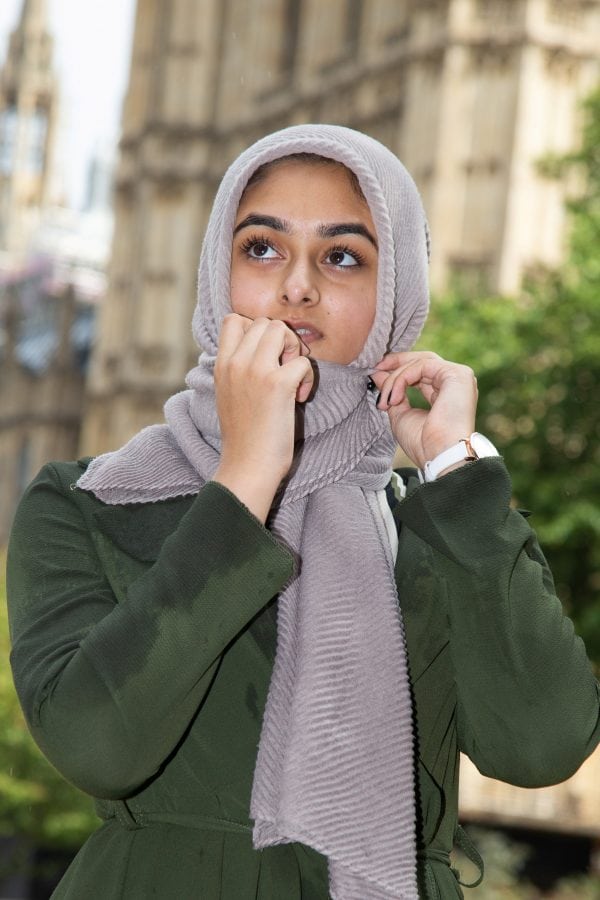 Women who choose to wear a niqab or burqa have just as much authority to do so as a woman who chooses to wear a simple headscarf would do.

Mr Johnson, you attended the 2012 Peace Symposium that was held at Baitul Futuh Mosque by the Ahmadiyya Muslim Community, a community that I take great pride in being a part of.

In this symposium you gave a very enthusiastic and seemingly heartfelt speech regarding the topic of peace.

You said yourself that we should be “bringing communities together through understanding and explanation rather than seeking unnaturally and unnecessarily to divide them”.

Why, then, are you not acting upon your own words?

You spoke so passionately on a topic that I am also very passionate about, yet what you said a few days ago did in fact “unnecessarily” “divide” communities.

I hope my words have had some kind of impact on what you decide to do next after the painful comments that you made.

Whether you choose to apologise or not, what you ignorantly expressed regarding the niqab and burqa should not be repeated in the future.

Looking forward, Mr Johnson, you should be able to learn from this terrible mistake.
I do not know if you’ll have the courage or even the decency to reply, but whether you do or not is purely your decision.

As you know, the motto of the Ahmadiyya Muslim Community is “Love for All, Hatred for None.” I sincerely hope that is a message you will also benefit from.

Thank you very much for taking the time to read this.
Yours sincerely,