The duchess gave a rousing speech surrounded by young women who have benefited from an initiative teaching them self-defence and female empowerment. 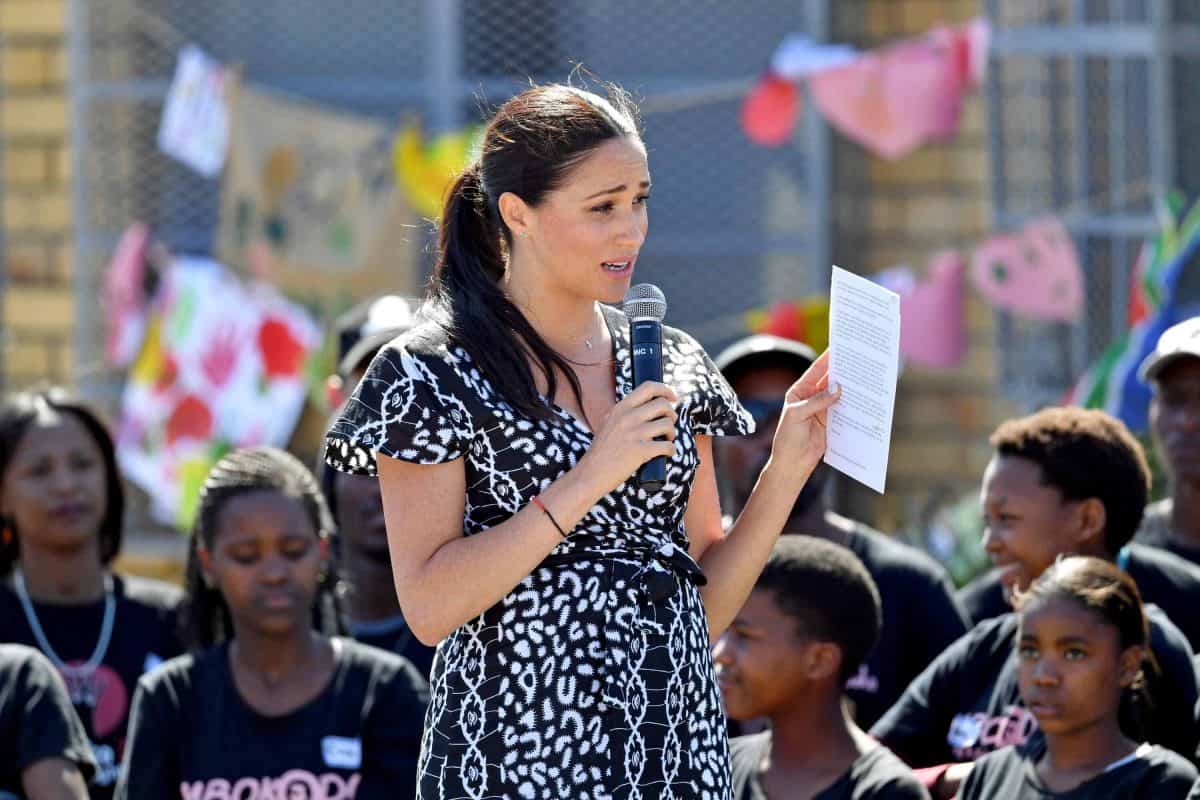 The Duchess of Sussex has publicly spoken for the first time since becoming a royal about being a “woman of colour” as she gave a rousing speech to South African township teenage girls.

Surrounded by the young women who have benefited from an initiative teaching them self-defence and female empowerment – Meghan took the unusual step of highlighting her mixed-race heritage as her tour of Africa with Harry and son Archie began.

Speaking in Nyanga township in Cape Town the duchess said: “And just on one personal note, may I just say that while I’m here with my husband as a member of the Royal Family, I want you to know from me I am here with you as a mother, as a wife, as a woman, as a woman of colour and as your sister.”

In a lighter moment Meghan, who told her audience she was making her first visit to South Africa, danced with some performers after one woman Lilitha Mazana, 23, took her hand.

The dancer from the Nyanga arts centre said: “Meghan was a good dancer, she’s very nice. Her dancing is fantastic – I’ve been dancing 10 years.”

Harry also spoke, and said it was “incredibly important” they started their 10-day visit in a South African township to learn about life in black settlements – which have seen increasing amounts of violence against women.

Meghan made the point of telling the young women and others from the community it was her “first time” in South Africa adding “you’re incredible and so powerful, because you’re all powerful”.

Campaigners took to the streets of Cape Town earlier this month, following a series of attacks that have shocked the African nation, to protest at what they claimed was their government’s failure to deal with the problem.

Meghan and Harry watched South African president Cyril Ramaphosa’s address to his country following days of protests, when he acknowledged the African nation was facing a national crisis of violence against women.

The duchess said: “The work that’s being done here is to keep women and children safer, which is needed now more than ever, this is an issue which has been at the forefront of people’s minds here in South Africa and of course across the globe particularly over this past month.

“Please know that my husband and I have been closely following what you’ve been experiencing here, as best as we can from afar.”

She added “everything that is being done on the ground is making the great change that you not only need but that you deserve”.

The couple had travelled to the area a few miles out of the city centre to learn about the work the Justice Desk, a human rights organisation, is doing to support the development of Nyanga township children.

The organisation is supported by the Queen’s Commonwealth Trust, which has Harry as its president and Meghan as vice-president.

Harry told the audience: “Touching on what your president said last week – no man is born to cause harm to women, this is learned behaviour, and a cycle that needs to be broken.

“So now, it’s about redefining masculinity, it’s about creating your own footprints for your children to follow in, so that you can make a positive change for the future.”

Gesturing to his head and heart the duke added: “To me, the real testament of your strength isn’t physical, it’s what’s up here and what’s in here. Your strength is in your spirit, which for me means honouring and protecting my wife, and being a positive role model for my son.”