The billionaire could be heard saying "best day ever" as the capsule landed, but not everyone was as impressed.... 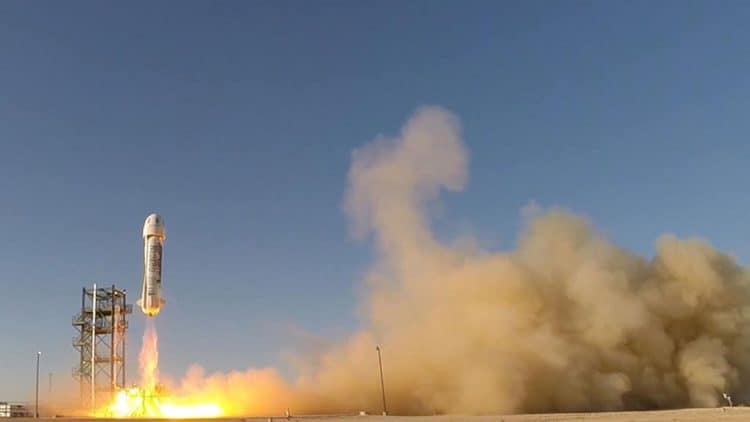 Billionaire Jeff Bezos has landed back on Earth after reaching the edge of space after taking off on Blue Origin’s first human flight with three passengers.

The Amazon founder blasted off in the sub-orbital New Shepard rocket from Texas, on Tuesday, the 52nd anniversary of the Apollo 11 moon landing.

He entered space with his brother Mark, female astronaut Wally Funk, 82, who trained in 1961 but never went to space, as well as the company’s first customer, Dutch 18-year-old Oliver Daemen.

Oldest and youngest people to fly into space

Ms Funk and Mr Daemen are the oldest and youngest people to fly into space, respectively.

The flight lasted around 11 minutes from launch to capsule landing.

Astronauts experienced three to four minutes of zero-gravity and travelled above the Karman Line, which is considered to be the boundary of space.

After the launch the crew could be heard cheering and shouting “woohoo”.

The booster that blasted the group of four into space before separating successfully landed back on Earth shortly after lift-off.

Shortly after the soft landing, a voice that appeared to be that of Jeff Bezos could be heard saying: “Best day ever.”

When asked by mission control how he was, his brother Mark said: “I am unbelievably good.”

The mission comes days after Sir Richard Branson flew into space on Virgin Galactic, and aimed to reach an altitude of roughly 66 miles (106 kilometres), more than 10 miles (16 kilometres) higher than Sir Richard’s ride on July 11.

Blue Origin is planning two more flights before the end of the year.

Reaction on social media hasn’t been all positive, with several people unable to look past the phallic nature of the space craft.

Everything about this spectacle is pure hilarity. Bezos went to space in a giant penis with his brother and an old lady for 2 min. Then proceeded to touch down safely in the dickhead where 2 stairs were awaiting their arrival to step down a ft and a half pic.twitter.com/JxerkOUWpO

Congrats to Jeff Bezos on his successful rocket launch. And also for totally not overcompensating for something pic.twitter.com/fI3OMxiaVQ

Wow. Jeff Bezos can go into space!
Now, let's see if he also is able to pay taxes.https://t.co/pR1nL5Oblz

I have nothing against Jeff Bezos taking a joyride. I just wish he’d pay his fair share of taxes.

Hey @JeffBezos can you take 1 second off your space flight and use that $42,000 to help me provide an #InstantImpact of 249,000 meals to the hungry in my community?https://t.co/JyJw6XKjH1 pic.twitter.com/mo2Vr9bjo8