“We were threatened by these people simply because we showed some concern for the horse." 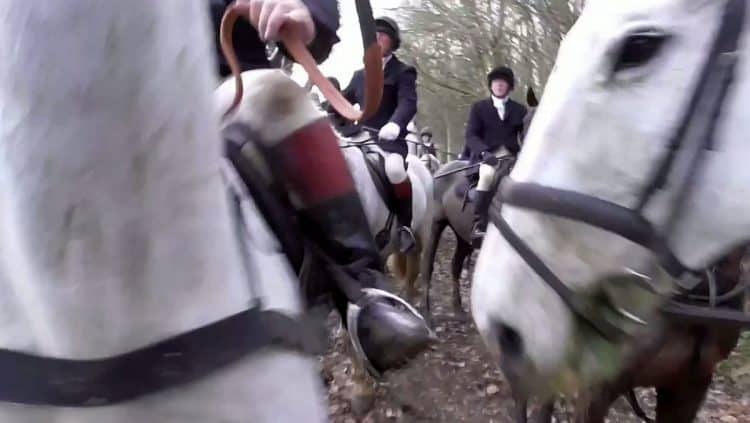 This shocking video shows the moment a hunt saboteur was allegedly knocked to the ground by an ‘aggressive’ huntsman on horseback.

The video appears to show Mel Broughton being charged and knocked backwards into a bush while angry riders swore at him and told him to ‘show some respect’.

Gardener Mel, 61, was uninjured, but ‘intimidated’ by the group of around 60 to 70 huntsmen on horseback.

Huntsmen in the footage can be heard saying: “Have some f***ing respect you a***holes”, but Mel said they were trying to see if an injured horse needed help.

Mel, 61, was monitoring the Cottesmore Hunt at Burrough on the Hill, Leicestershire, on December 21, when he stopped to check on a horse which had collapsed in a field.

Cottesmore Hunt later confirmed on its official Facebook page the horse had ‘suffered an aneurism on the hunting field’ and has died as a result.

Mel, who was with a fellow hunt saboteur, said the joint party with the Meynell Hunt set out from Burrough on the Hill at around 11am yesterday.

“Two of us came down a track with the hunt lines behind us and in the field to our right, we noticed some riders had dismounted around a horse that was clearly distressed,” said Mel, from Northampton.

“We stopped and I offered to see if there was anything I could do, at which point we were verbally abused.

“A number of field riders were coming up behind us.

“One of them on a large grey-white horse got really angry and started using his horse against us.

“We had just offered to help but they were getting more and more aggressive and starting using the horse against us.

“We were threatened by these people simply because we showed some concern for the horse.

“I have been hurt in the past and put in hospital several times but this time I was okay. I have been ridden into before.

“When you’re close to these people and their horses – and they are large – it’s really intimidating. Horses are powerful animals.

“They are more than willing to use them as a weapon. It was a very dangerous situation and completely unwarranted.

Mel insisted that they had given the huntsmen no cause to become aggressive.”

He said he was filming the hunters when they began to become aggressive and they ‘don’t like’ saboteurs monitoring them or disrupting hunts.

Mel added: “We have film running all the time for our own protection and to record any illegal activity.

“But at the end of the day, we didn’t do anything other offer any assistance we could. We were causing no threat.

“We only asked if there was anything we could do and that was it. We were forced to leave the area by the actions of the hunt followers. We learned later the horse had in fact died.”

Mel did not report the alleged attack to the police because of past disappointments with how complaints have been handled.

He said: “We often report things to the police and more often than not nothing happens.

“They are very very slow to react and, at best, disappointing.”

A statement posted to the Cottesmore Hunt Facebook page confirming the death of the horse read: “A vet was in attendance with the horse throughout and our thoughts are with the owner and those affected by this distressing incident.

“Animal welfare is always a priority and we thank those who assisted with this matter clamly and professionally.”

Cottesmore Hunt and Maynell Hunt were approached for comment.