Watch: Hartley-Brewer and RMT’s Eddie Dempsey clash over wages and is left with egg on her face

Picket lines were mounted outside railway stations on Saturday, with Aslef saying they were receiving strong public support despite the disruption the strike was causing. 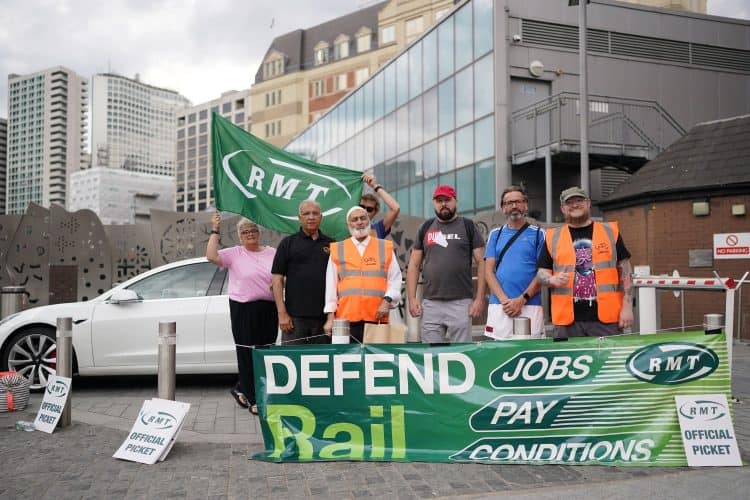 How much is enough to live on in London? Not enough according to the RMT union.

It comes as members of Aslef in seven train companies walked out for 24 hours, crippling services in many parts of the country.

Football fans travelling to the opening Saturday of English leagues, and people going to the Commonwealth Games in Birmingham were among those affected.

Strike action will be stepped up next month with a series of stoppages in the bitter row over jobs, pay and conditions.

Picket lines were mounted outside railway stations on Saturday, with Aslef saying they were receiving strong public support despite the disruption the strike was causing.

Before we get to this spat here is a viral video of Dempsey talking about the fight for future generations.

Here is a clip of his argument with Julia Hartley-Brewer about living on £24k in London.

Dempsey clearly thinks it is not enough, but Julia hit back saying she had lived on less.

She claimed it wasn’t poverty.

However, there is a sting in the tail for Julia.

Shew wrote in a This is Money article the following:

I got a job at a local newspaper in London earning £9,000 a year. Even in the 1990s, that was still not a lot of money. It was a struggle. I used to walk everywhere because I couldn’t afford public transport. I had no spare cash and still had college debts to pay off. But I always knew deep down that I’d be OK. I didn’t have a sense of hopelessness. I saw what I was doing as a stepping stone to something better.