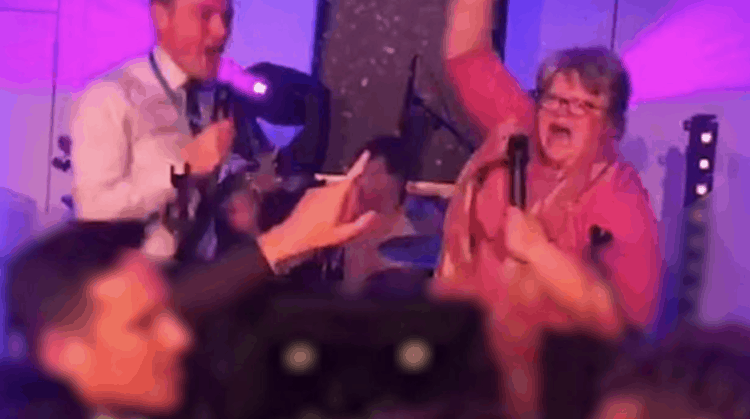 The Conservative welfare secretary crooned “I’ve had the time of my life” – hours before cutting crucial benefits for nearly six million Brits.

Therese Coffey danced and sang the Dirty Dancing classic at a karaoke night at the Tory conference in Manchester on Tuesday night – just as the government sets about slashing Universal Credit.

The Work and Pensions minister belted out the 1987 anthem with fellow Tory minister Will Quince in preparation for ending the £20-a-week UC uplift – the biggest overnight benefits cut since the Second World War.

Coffey’s cut is expected to plunge hundreds of thousands into poverty – with as many as three million children affected.

One child every second will be affected by the widely opposed cut on average over the next month, a charity has warned.

Save the Children is one of a long line of charities, think tanks, unions and leaders from across the political spectrum hitting out against the removal of the £20-a-week uplift.

From Wednesday, no assessments will include the uplift, meaning that from 13 October – a week later – no payments will be received that include the extra money.

The cut will be staggered over 31 days as families receive payments on different dates, Save the Children said.

Just over 3.5 million children in the UK are living in households that receive UC payments, according to government figures. This equates to 1.3 children being hit by the cut every second on average over the 31-day period from October 13, Save the Children said.

But that didn’t seem to affect Coffey, who urged the watching public to get involved, bellowing: “Come on conference, join in”.

It’s fair to say onlookers have been left unimpressed by her performance.

Neil O’Doherty said: “I couldn’t make my way through all of it as my blood was starting to coagulate. Watch at your own peril!”

One Twitter user said: “These people have no sense of how appalling or insensitive they appear. It’s stomach churning.”

Another said it is a “sickening sight and sound” of the minister responsible for Work and Pensions “‘having the time of her life’ as the £20 cut in Universal Credit comes into force.”

Last month, Coffey suggested UC claimants can work two hours extra every week to make up for the £20 cut.

But figures from the Independent Parliamentary Standards Authority showed she claimed over £201,000 in parliamentary expenses between 2019 and 2020.

Taxpayers reimbursed the Suffolk Coastal MP for £201,278.38, as she worked to end the Universal Credit uplift on which many families have relied during the pandemic.

Speaking about the cut, Coffey told BBC Breakfast: “I’m conscious that £20 a week is about two hours’ extra work every week – we will be seeing what we can do to help people perhaps secure those extra hours, but ideally also to make sure they’re also in a place to get better paid jobs as well.”

The Resolution Foundation’s principal economist, Adam Corlett, said: “The government has tried to justify the coming cut to Universal Credit – and the huge income loss facing millions of households – by saying that it can easily be offset by simply working a few more hours. If only it were that simple.

“A small increase in working hours will be nowhere near enough to cover the £20-a-week cut coming their way in just one month’s time.

“Given the scale of losses coming to millions of low and-middle income households this autumn at the same time as bills are rising, the Chancellor should change course on Universal Credit.”

Related: Thérèse Coffey claimed £200,000 on expenses while cutting your benefits