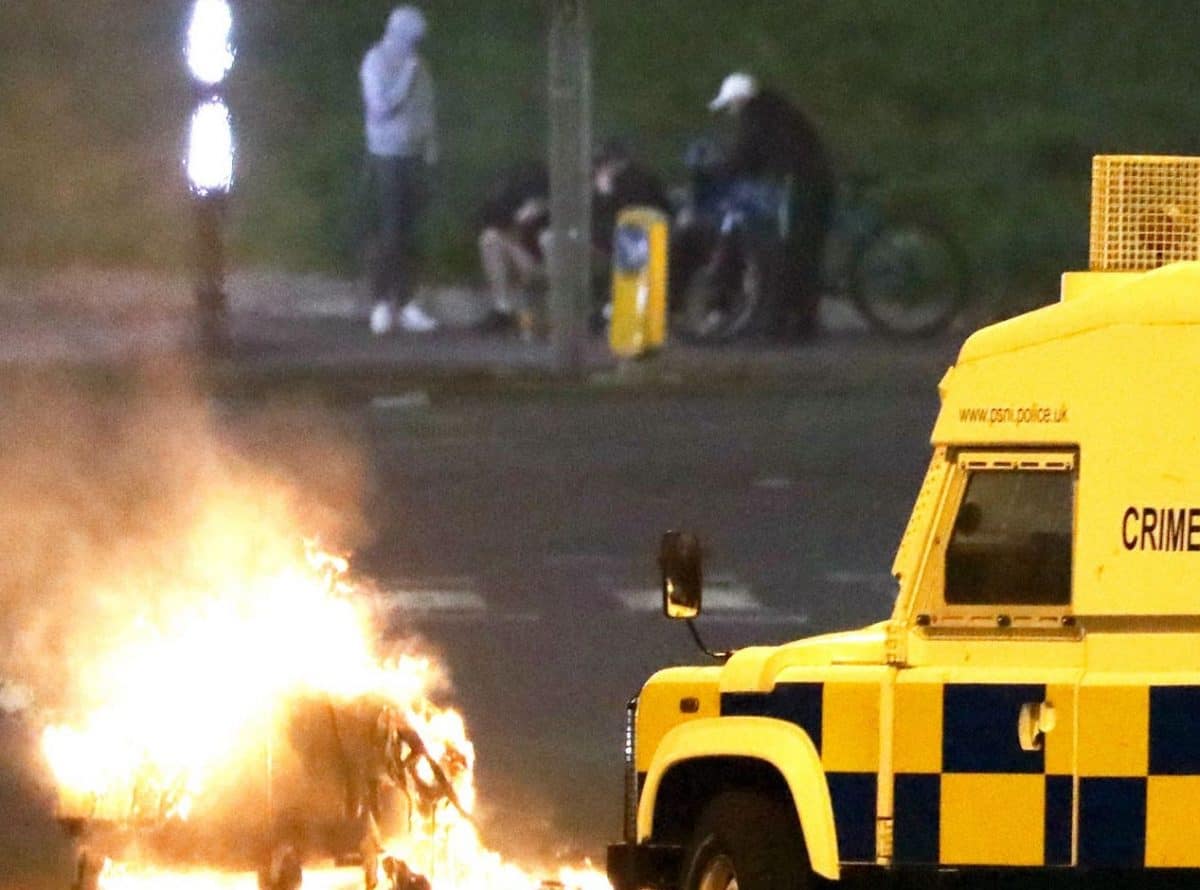 There has been condemnation following a further night of disorder in Northern Ireland.

Police came under attack in Newtownabbey on the outskirts of Belfast on Saturday after violent scenes in the Sandy Row area in the city as well as Londonderry on Friday.

Police said it was the fifth consecutive night of disorder in Derry on Friday where 12 officers were injured by a large group of youths and young adults throwing masonry, bottles, petrol bombs and fireworks.

What is the point in this? Destroying your own communities is not the way to protest or vent. Why is it always our @PoliceServiceNI colleagues who face the brunt of this pointless violence? @naomi_long @NIPolicingBoard pic.twitter.com/QGmNsjek3u

Police are appealing for an end to the continued violence in Belfast once again tonight. And for calm, particularly with those who have with influence to keep young people safe as violence erupts again. Tonight in Newtownabbey.

In Newtownabbey on Saturday a number of cars were hijacked and set on fire in the O’Neill/Doagh Road area.

Officers on the scene were attacked with petrol bombs and fireworks.

Serious disorder at O'Neill/Doagh Rd Newtownabbey and Police in front line as usual. This is to be utterly condemned and has happened at this location, for different reasons, previously. A need for calm and for parents to check where their children are. pic.twitter.com/wNNoiKhAW4

“This is to be utterly condemned and has happened at this location, for different reasons, previously.

“A need for calm and for parents to check where their children are,” he said.

On the same night, a security alert in Larne, Co Antrim was declared to be a hoax.

The scenes come amid tensions within loyalism across Northern Ireland.

One Twitter user, after Friday’s riots, wrote: “Eight police officers injured after loyalist rioting in south Belfast – There are many casualties of Brexit but the damage to Northern Ireland Peace Process is the most terrible. Brexit is an abomination.”

Eight police officers injured after loyalist rioting in south Belfast – There are many casualties of Brexit but the damage to Northern Ireland Peace Process is the most terrible. Brexit is an abomination. https://t.co/zb46QytLvI

England voted for this.

It still does not.

Northern Ireland is a complex mess of the UK's creation and needed proper consideration, but Brexiters didn't care.

Tensions ramped up further this week following a controversial decision not to prosecute 24 Sinn Fein politicians for attending a large-scale republican funeral during Covid-19 restrictions.

DUP leader Arlene Foster and other unionist parties have condemned the violence.

Sinn Fein MLA Gerry Kelly claimed the disturbances were “a direct consequence of the actions of political unionism”.

“The disturbances in loyalist areas across the north are an outworking of the DUP’s rhetoric and undermining of the PSNI and criminal justice system,” he said.

“By their words and actions they have sent a very dangerous message to young people in loyalist areas.

“The DUP and political unionist leaders need to show leadership and end the incendiary rhetoric.”

Meanwhile seven people have been charged with riot after the disturbances in the Sandy Row area.

They are due to appear at Belfast Youth Court on April 30.

As is normal procedure, all charges will be reviewed by the Public Prosecution Service.

An eighth person arrested in connection with the unrest on Friday night, a man aged 19, has been released on police bail pending further inquiries.