Foreign secretary Liz Truss’s plans to legislate to rip up parts of the Northern Ireland Protocol have been met with outrage in Brussels and Dublin. 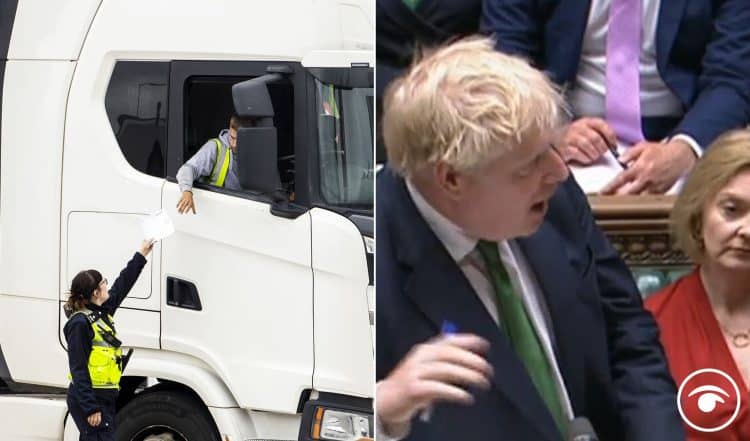 Foreign secretary Liz Truss said there was “absolutely no reason” for the European Union to retaliate against the UK after plans to tear up the Northern Ireland Protocol caused outrage in Brussels and capitals across the bloc.

Ireland’s Foreign Affairs Minister Simon Coveney warned the UK Government’s move could “destabilise” the situation in Northern Ireland and was undermining the work that led to the Brexit agreement with the EU.

But was ripping up the protocol always the plan?

Filmmaker Peter Stefanovic has created another video dissecting the government’s approach to Brexit.

He says: “In July 2019, Johnson said there would be no border down the Irish Sea over my dead body. Two months later he agreed to check in the Irish Sea.

“Johnson knew exactly what damage his own ready deal would cause when he signed it. The government’s own impact assessment told him.

“However, Johnson shamelessly continued to tell the public that there would not be checks on both sides.

“It gets even worse this what DUP Ian Paisley MP said in 2021, ‘after he agreed to protocol he would sign up to change it and indeed tear it up,’ and that is exactly what he is doing.”

Peter tweeted the video and wrote: “In 2019 Boris Johnson said he had got ‘a great deal for the UK.’

“Now the Government says the deal he agreed & signed is so bad, so terrible, so calamitous it represents such a threat to the stability of the UK it’s legal to breach the very international treaty which created it!”

Related: U could take legal action against UK as soon as Wednesday in response to NI Protocol moves