“Brits are facing a week of travel disruption, and this Conservative Government are missing in action." 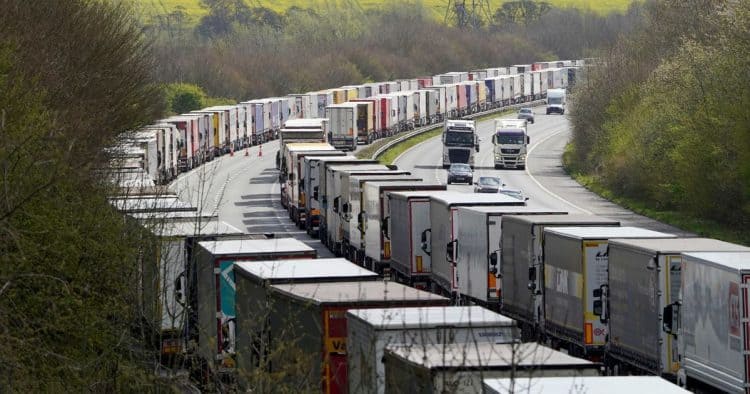 Labour has urged the Government to intervene amid warnings holidaymakers hoping to get away for Easter face long delays and severe disruption at UK airports.

Problems with a key post-Brexit IT system for customs checks are contributing to Easter traffic chaos in Kent as thousands of lorries are parked up awaiting Channel crossings, reports The Independent.

The Road Haulage Association said HMRC is “continuing to have issues” with its new post-Brexit GVMS system for customs declarations, without which lorries cannot move goods between Britain and the EU.

Without the system, drivers lack scannable barcodes needed for the rapid check of lorries at ports including Dover.

An HMRC spokesperson said: “We have put in place contingency processes to ensure businesses can keep goods and freight moving while we return to full service.”

A message on the HMRC site says: “We are undertaking robust investigations into our systems to address the underlying issues behind this outage. We will provide a further update by midday, Monday 11 April. We apologise for any inconvenience this may cause.”

Drivers have also been urged to avoid the M20, the A20 and the A2 as a result of a 23-mile lorry queue, including more than 2,000 lorries, caused by Operation Brock.

Non-freight traffic is being advised to use the A20 instead of the M20, while freight traffic coming off J8 of the M20 has been sent into holding areas to await clearance before heading to the Channel Crossings.

A statement from Kent Highways read: ‘The M20 Coast bound from J8-J11 remains closed following the implementation of Brock Zero due to continuing high volumes freight heading to the Port of Dover and Euro Tunnel arriving in Kent.

‘All vehicles and Freight which is not crossing the channel will be diverted onto the A20 and should follow the hollow circle diversion symbol and other signs and re-join the M20 at J11.

‘Hard closures are being put in place by Kent Police and National Highways on all Coastbound slips which join the M20 between J8 and J11.”

Manchester Airport has urged passengers to arrive three hours before departure to avoid missing their flights as staff shortages have led to the build up of lengthy queues.

After cutting thousands of jobs during the coronavirus pandemic, the aviation industry in general is suffering from difficulties recruiting staff and waiting for security checks to be passed on new employees.

There has also been a recent rise in coronavirus-related staff sickness.

Shadow transport secretary Louise Haigh has urged ministers to prioritise staff at Manchester and other major airports for Home Office security checks so they can start work as soon as possible.

Ms Haigh MP said: “Brits are facing a week of travel disruption, and this Conservative Government are missing in action.

“Tory ministers need to step-up and act to ease the disruption. The Government need to begin clearing the huge backlogs in security checks so airport staff can safely begin work.”

Ms Haigh also called on ministers to open emergency talks with ferry operators and Eurotunnel to increase capacity following the suspension of services by P&O Ferries after it controversially sacked 800 seafarers.

With up to 70 sailings a day still reportedly affected, roads in Kent have seen long tailbacks as lorries queue to get into the port of Dover.

“They (ministers) need to look urgently at what powers they can use to force P&O Ferries to re-employ trained and experienced staff on their original terms to get the routes up and running,” Ms Haigh said.