Pictures posted on Facebook showed trucks wedged in precarious positions in the village as they tried to negotiate the winding streets. 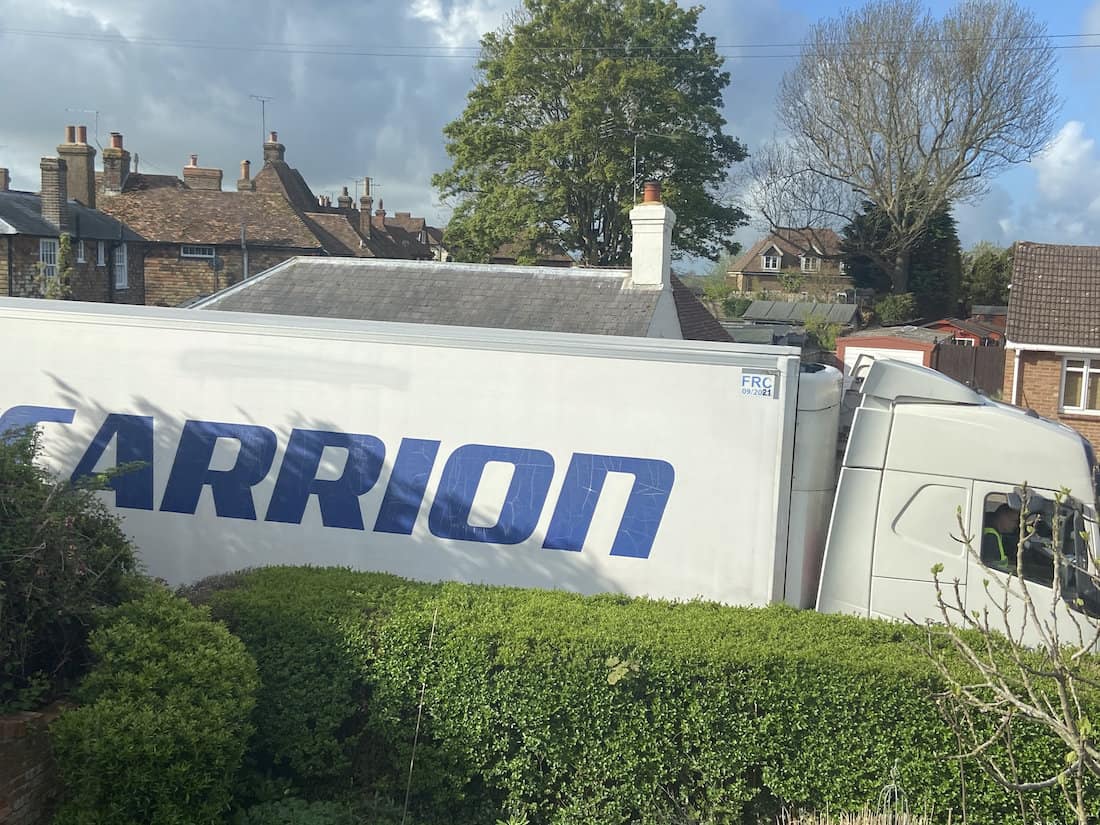 Lost truckers are back clogging up a quiet village because the government is giving them the wrong postcode for the Brexit lorry park.

Frustrated residents living in Mersham near Ashford, Kent, have seen their narrow country lanes blocked by huge HGVs that have been given incorrect directions.

Mersham is just a mile away from the Sevington Inland Border Facility (IBF) in Ashford, which was built to cope with the surging demand for checks on hauliers crossing to France after Brexit.

Within days of the 66-acre  park opening, lorries were getting stuck throughout the village and tearing up turf as they tried to manoeuvre out.

Around 30 lorries arrived in the village in just a matter of days when the IBF first opened in February.

Partially responsible for the chaos was that the lorry park did not have a dedicated postcode, so drivers were being directed to Mersham by sat-nav.

Following an outcry from inconvenienced residents, more signage was put up on the nearby M20.

But this proved to be so ineffective that Kent County Council created a 24/7 monitoring system outside the village early last month.

Officers were stationed in a car at the A20 entrance to Mersham to redirect any stray lorries, which seemed to stem the issue for a time.

But now the council confirmed the monitoring system has ended and reports of more lorries jamming the country lanes have ballooned again.

Pictures posted on Facebook showed trucks wedged in precarious positions in the village as they tried to negotiate the winding streets.

Video footage taken by residents showed lorries meeting head-on and having to try and negotiate tight corners. One clip featured a row of three lorries stuck down a narrow road.

Council bosses say the confused hauliers – who are being sent to the HGV facility from the Eurotunnel terminal near Folkestone 20 miles away – are losing their way due to inaccurate directions.

Even the government’s own website gave the wrong address for the IBF, despite being told about the problem.

Resident Sharon Swandale got so annoyed with the problem that she has come up with a partial solution involving the What3Words location app, which assigns three unique words to each small square covering the whole world.

She said: “Considering the government gave out two postcodes, neither of which are unique to the IBF, I have updated as many haulier sites as possible with the What3Words location.”

Ironically, the What3Words code for the spot is escape.transit.matter.

Another homeowner said that efforts to curb the trucks’ entry has actually resulted in more inconvenience for those living there.

Jade Collins said: “Putting cones on the slip road into Mersham off the A20 clearly isn’t stopping lorries coming in, it just makes it dodgy for us in cars to turn in as it’s a very abrupt corner now.”

When asked about this week’s resurgence in troublesome trucks, Kent County Council said permanent signs were due to be installed on the M20.

A spokesman for the authority said: “We understand residents’ frustrations and we are working closely with the parish and local county councillor to deal with the issue.

“We no longer have a 24/7 officer on site, but have added more signs directing HGVs to where they should be going.

“Highways England is due to install permanent signing on the M20 and the DfT is ensuring the postcode for the site is available on Google and sat navs.”