Watch: Apocalyptical scenes as train stops in middle of wildfire

“It was really scary to see how quickly the fire spread. Just in the blink of an eye, a new bush began burning. It was a matter of seconds.” 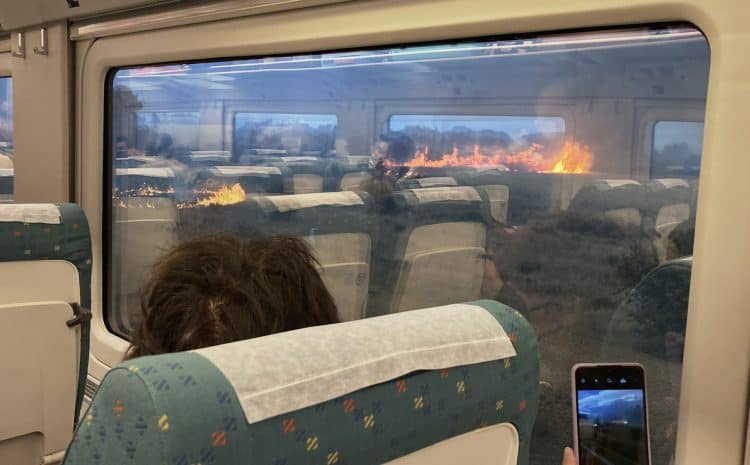 Passengers on a train that stopped unexpectedly in the Spanish countryside got a fright when they looked out of the window at wildfires encroaching on both sides of the track.

Francisco Seoane, from Spain, told The Associated Press: “It was really scary to see how quickly the fire spread. Just in the blink of an eye, a new bush began burning. It was a matter of seconds.”

“It suddenly become night,” he added. “And we could even smell the smoke” inside the carriage.

Video of the unscheduled stop shows about a dozen passengers in Mr Seoane’s carriage becoming increasingly alarmed as they look out of the windows.

Flames licked at the vegetation, and smoke darkened the blue skies as the train drew to a halt on Monday morning in the province of Zamora, where blazes have charred large areas of woodland over recent days.

This province has recorded two deaths from wildfires in the past two days: a 69-year-old shepherd and a 62-year-old firefighter trapped in the flames.

With no passenger announcements coming over the train’s public address system, Mr Seoane said passengers became agitated and began to stand up in the aisle.

An Adif spokeswoman told AP that no passengers were in danger.

More than 30 forest fires around Spain have forced the evacuation of thousands of people and blackened some 54,300 acres over the past week.