"DON’T LET THESE CHARLATANS GET AWAY WITH IT," Peter Stefanovic wrote alongside his new video. 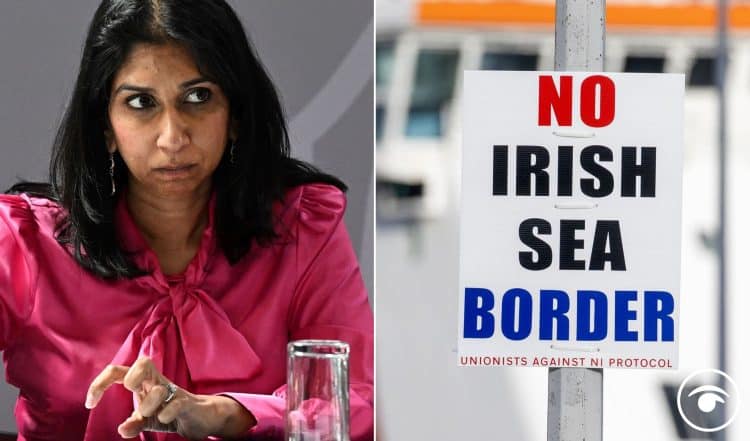 The EU is trying to make the UK “feel bad” about Brexit through its approach to dealing with the Northern Ireland Protocol, Jacob Rees-Mogg has said.

It comes as a new video by Peter Stefanovic has slammed similar comments made by Attorney General Suella Braverman on last night’s BBC Question Time.

Mogg and Barverman’s comments have not gone down well in Ireland.

Their Foreign Affairs Minister Simon Coveney has instead insisted that the UK Government would be acting in an “anti-democratic” way if it goes through with its threat to override elements of the post-Brexit treaty.

Government ministers have been increasingly hinting they could take unilateral action on the protocol, with Boris Johnson arguing the Good Friday Agreement is more important than the protocol he signed up to.

Mr Rees-Mogg, Minister for Brexit Opportunities and Government Efficiency told GB News: “I think it (the EU) wants to make the UK feel bad about having left the European Union and that underpins its whole policy and it doesn’t really mind about the consequences of that.

“And we just have to get on with life and recognise that we have left.

“We have to make our own way.

“We are an independent country, and what the EU wants and thinks is secondary.

“The Paymaster General, Michael Ellis, has made a speech in Brussels today, making it very clear that we are, if not at the end of the road, very close to it.

“To cancel the TCA (EU-UK Trade and Co-operation Agreement), the European Union would need unanimity, and it seems to me that’s a pretty high bar to get.

“And you have to say to the European Union, does it really want to punish its consumers at a time of rising inflation?

“And inflation in a lot of the EU countries is higher than it is in the UK.”

Filmmaker Peter Stefannoic dismantles Braverman’s argument in a video that has already been viewed over 160,000 times since it was posted earlier today.

Action over the Northern Ireland Protocol is “painfully, apparently necessary”, the Attorney General said in a major hint the Government will override parts of the post-Brexit agreement.

Suella Braverman, the Government’s chief legal adviser, did not deny reports she has approved the scrapping of large parts of the deal with emergency legislation.

In response, Stefaonivc tweeted the video and wrote: “Attorney General Suella Braverman shamelessly tried to whip up anger by blaming the EU for creating a border in the Irish Sea. It was NOT the EU, it WAS Boris Johnson’s “oven ready” Brexit deal! DON’T LET THESE CHARLATANS GET AWAY WITH IT.”