"The Dartford Tories threw themselves a F**KING BUFFET at the opening of a FOOD BANK." 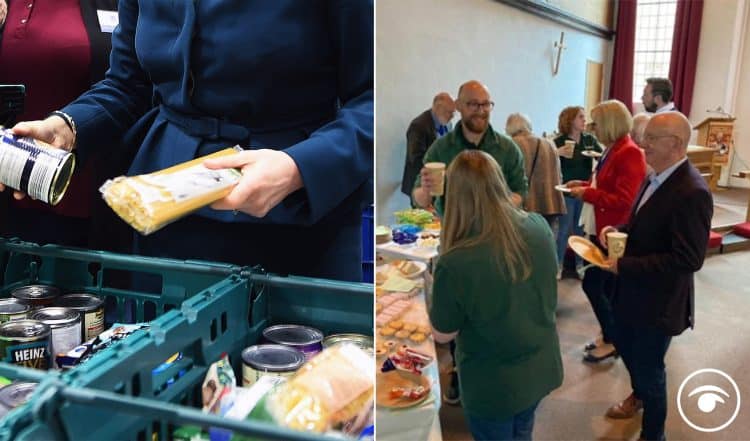 The image of Dartford’s Tory council leader grinning as he cut the ribbon to open a food bank has rightly sent people into orbit, as the pics emerged.

But now more details have been discovered about the buffet they had afterwards, more of this later.

James O’Brien also tweeted: “WTF are they all so happy about?”

It comes a Conservative MP has been slammed for suggesting people in the UK use food banks because they “cannot cook properly” and “cannot budget”.

Ashfield MP, Lee Anderson, invited “everybody” on the opposition benches in the House of Commons to visit a food bank in Ashfield, Notts, where, when people come for a food parcel, they now need to register for a “budgeting course” and a “cooking course”.

Now another image has revealed the party went on to enjoy a buffet after the opening event – in the same church building where desperate families will queue for handouts.

The leader of the local Tory council, Jeremy Kite, was among those tucking into the food.

Pictures of the event were hastily deleted from his Facebook page once they were spotted.

Nicholas Hair, a Labour council candidate in Bexley, said: ‘Having worked with colleagues in Dartford, and seeing the destitution of up to two million people across this country right now, this was disgusting to see.

‘Food banks are not “heart warming”, they are evidence of a failure of government and of a society to seek social justice.’

The whole incident has left a lot of people furious as people go hungry: