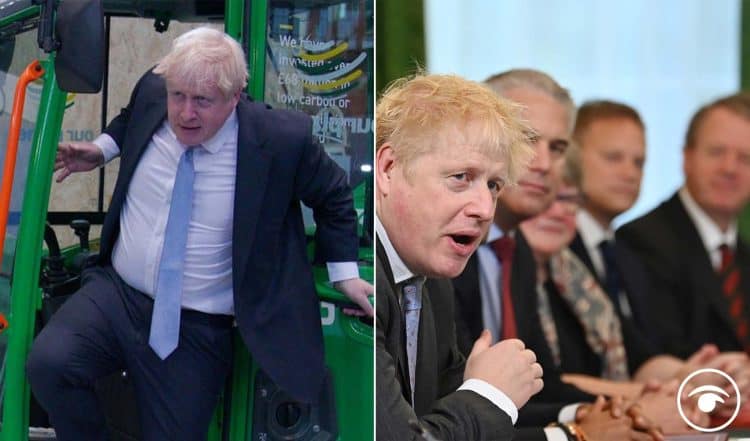 Boris Johnson has said young people should get back to the office to stop their colleagues gossiping about them.

The prime minister urged people to return to the office and stop the practice of working from home that was widespread during the height of the coronavirus pandemic to stop the spread of the disease.

The Daily Mail reported on Tuesday that Mr Johnson would be using his speech at the Conservative Party conference in Manchester on Wednesday to tell workers it was time to return to their desks.

The newspaper quoted a senior source as saying: “He (Mr Johnson) believes very strongly in the value of face-to-face working. It is critical for the training and development of young people. How can you learn a new job on Zoom?”

Appearing on LBC on Tuesday, Mr Johnson said he had “done a lot of Zoom meetings”.

And asked by host Nick Ferrari whether he had all his staff back behind their desks, the Prime Minister said: “No.”

He added: “The Cabinet Secretary has written a pretty good letter some weeks ago to everybody telling them to get back to their desks.”

It is understood that fears of another spike in coronavirus putting paid to plans for staff to return to the office – as it did last year – have subsided.

But Mr Johnson was careful not to rule out the prospect completely.

Asked whether he could say for certain that there would not be another wave, he told LBC: “We’ve got to be humble in the face of nature, and we’ve got to recognise that the disease can… or a new variant or another pandemic could always hit us.”

But he said: “The data that I see at the moment is very clear that we are right to stick to plan A, which is what we’re on.

“And that means opening up and encouraging people but always continuing – as we said at that press conference a few weeks ago – always continuing to do sensible things like washing your hands, having ventilation, all that kind of thing, making sure you’re sensible.

“But we are certainly encouraging people to get back to work in the normal way.”

It comes after former Cabinet minister Jake Berry urged civil servants to go back to the office, joking that their “woke-ing from home” must end.

Speaking at a fringe event in Manchester on Monday, Mr Berry, chairman of the Northern Research Group of Conservative MPs and former Northern Powerhouse minister, said: “We have to end the Civil Service ‘woke-ing’ from home – sorry, I mean working from home, but, let’s be honest, it often is woke-ing.”

Official “work from home” Whitehall guidance was removed on July 19 and the Government told businesses they expected “a gradual return over the summer”.

Asked about Mr Berry’s comments, Boris Johnson’s official spokesman defended the Civil Service but emphasised the importance of “working in person” and said the Government wanted “to see a steady return of the public to working in person”.

When it comes to gossiping the PM has form, he was caught gossiping about Trump.

At the time, in December 2019 Sky news Tweeted the video and wrote: “Boris Johnson, Emmanuel Macron, Justin Trudeau, Mark Rutte and Princess Anne all appear to be having a jocular conversation about an unnamed associate at a Buckingham Palace reception.”

Boris Johnson, Emmanuel Macron, Justin Trudeau, Mark Rutte and Princess Anne all appear to be having a jocular conversation about an unnamed associate at a Buckingham Palace reception.