“An explosion of tomato flavours and local delicacies from the southern Valencian region.” 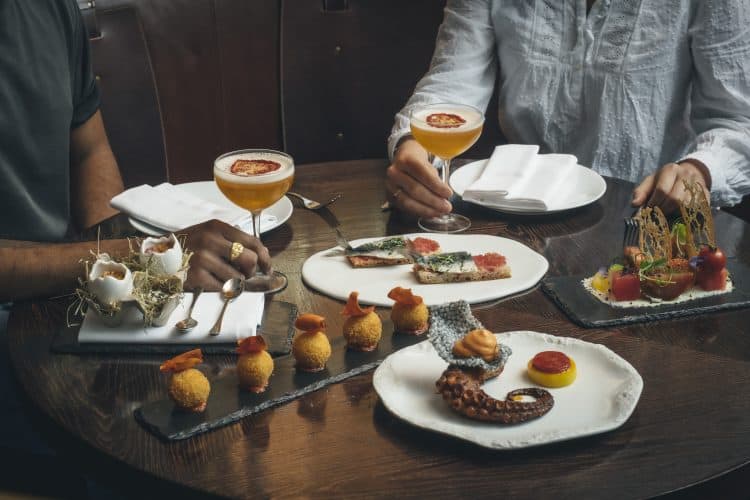 “This is a side to London I don’t often see,” says my dining companion on arrival at Aqua Nueva. I’m inclined to agree. We’re both journalists so, necessarily, are more familiar with the city’s dinge. And as a result, are quite comfortable there too.

Aqua Nueva, near Oxford Circus, is a huge, fifth-floor space overlooking Regent Street that exists firmly in the light. The Spanish restaurant twinkles under an arched copper clad ceiling despite the low-lit black tables at which sits, particularly comfortably, a rather glamorous sub-sect of London life. On the other side of the building is Aqua Kyoto the Japanese ying to Nueva’s yang and the spaces are quite different while adhering to a theme. It’s an interesting concept. There’s a large outdoor terrace too, which given its location must be popular. This is also seen in the manner that tables out there can’t be booked.

So what’s new? The Tomatina menu is running for six weeks and hopes to celebrate Valencia’s annual tomato throwing festival by serving a selection of limited-edition dishes inspired by the tomato as well as a new cocktail created for the occasion.

We are to ‘expect an explosion of tomato flavours and local delicacies from the southern Valencian region’. And our opening cocktail – the Tomatina – made with Tanqueray gin, apricot brandy, sugar syrup and freshly tomato water certainly fits the bill. It’s sweet, quite floral and a refreshing start to a meal which is likely to be punchy, salty and less subtle than this opening drink. Nothing wrong with that though.

The food arrives quickly, all explained brilliantly by the charming staff, who I feel for slightly. I’ve never understood loud music in restaurants nor have I met many who do, but clearly it isn’t ever enough of a deterrent to put people off. We raise our voices and make do.

Spanish food is striking to me because no matter how much layering there is of fatty, creamy, salty, rich flavours it doesn’t become overbearing in the way other cuisines might. The croquetas summed this up perfectly, they’re light and crisp each sitting atop a blob of aioli or a jam which cuts through their deep fried exterior. Lamb cutlets are blushing and the pickled cucumber courgette and tomatillo sauce is a delight – sour, punchy and acidic.

There’s a light touch from the tomato, watermelon and goat’s curd which spans the full spectrum from the delicate watermelon, to acidic tomatoes and roundly funky, creamy goat’s curd. All undercut nicely by the presence of some crisp near-tostadas fashioned from bread with olive oil.

Everything is also surprisingly good value and an autumn menu, which features some of the Tomatina specials, means that four dishes and one desert comes to £39 per-person. What’s offered is a slimmed down version of the a la carte menu that retains some of the best dishes such as the croquetas, cod fritters, suckling pig tacos, beef short rib and paprika marinated chicken skewer.

There’s a buzz to this part of town which is nice to dip in and out of. Despite its appearance Aqua Nueva is actually quite accessible. It’s built in the mould of restaurants like Hakkasan, Nobu and Arros QD but is not in the same realm when it comes to jaw-dropping prices. Riding up in the lift gives the place a slightly different world atmosphere – I listen to some Americans chatting on the way up and feel as though I’m on holiday. Indeed, there’s no reason why this spot won’t suit many who frequent the area. The Tomatina menu will be changing, moving on to a different region of Spain in the coming weeks which also means reason to keep coming back. And why not?