By Joe Mellor, Deputy Editor It started with New Zealand’s police #runningmanchallenge Facebook video but it has now been followed by NYPD. The NZ police force released the video of some of their officers getting down to the “running man” dance in a slightly unorthodox recruitment drive. They then challenged other forces across the world […] 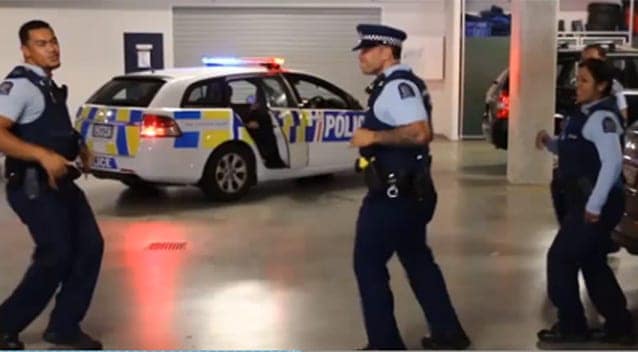 It started with New Zealand’s police #runningmanchallenge Facebook video but it has now been followed by NYPD.

The NZ police force released the video of some of their officers getting down to the “running man” dance in a slightly unorthodox recruitment drive. They then challenged other forces across the world to mimic them.

The clip is part of a year-long campaign by the New Zealand police force, which wants to sign up 400 new officers by the end of 2016, particularly from ethnic groups.

International police forces tagged in the post included those in Australia, the US and the UK.

On Wednesday afternoon the New York City Police Department (NYPD) accepted the challenge and created their own version on a pier in the shadow of the Brooklyn Bridge.

Lots of other forces are considering it, however, the Isles of Scilly police will not be following suit. Sergeant Colin “dad dance” Taylor said dance was not his team’s strong point.

“I note that the gauntlet has been laid down by [New Zealand police] for a dance off with us.

“I also note that they can draw on a supporting cast of thousands of officers and staff whereas we have a modest team of five and occasionally a cat. Our combined age on this small rock in the Atlantic (including feline years) is over 300.”

“We wish NZ Police the very best with their recruitment drive. It certainly is a remarkable career even if you have to do it upside down dancing on the ceiling.”