by Ed Chatterton
in Arts 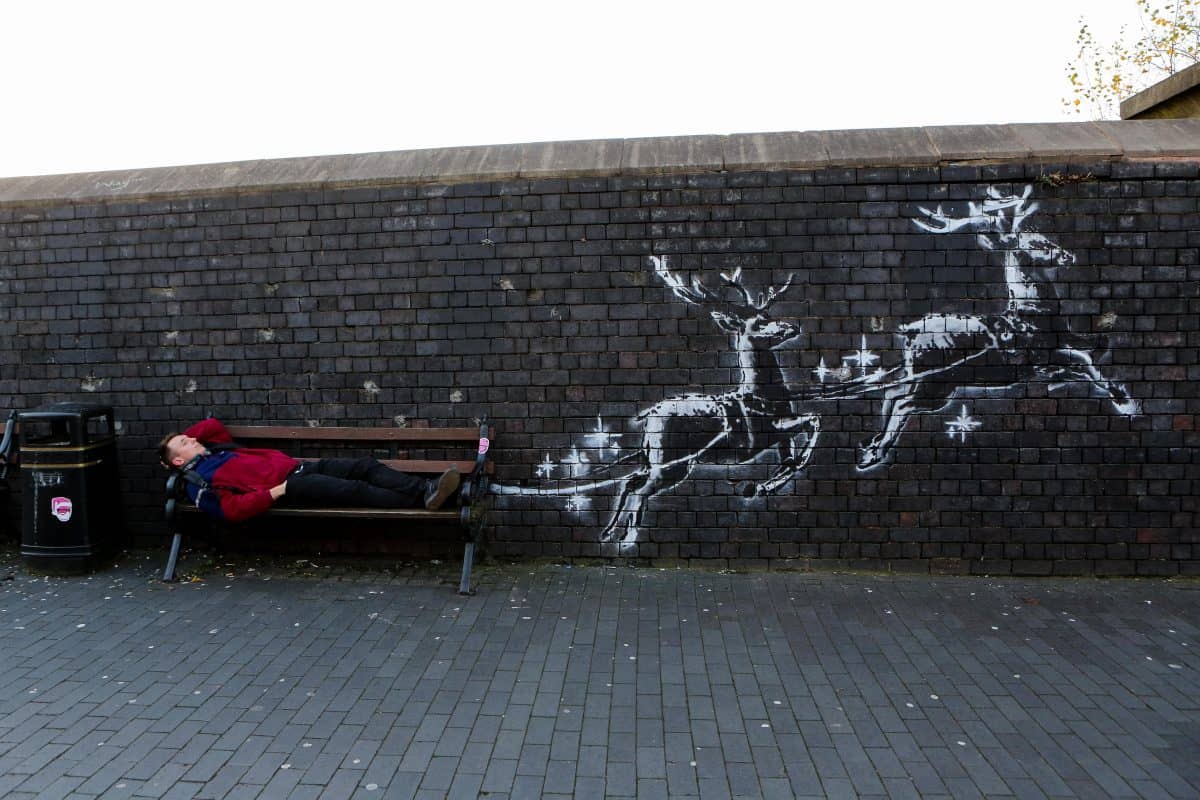 Police were called to control crowds of people who flocked to a new Banksy mural unveiled in Birmingham today yesterday.

The poignant artwork appeared on Vyse Street in the city’s historic Jewellery Quarter overnight depicting two reindeer pulling a bench as a sleigh.

The world-famous Bristol artist posted a video on Instagram of a homeless man named Ryan lying on the bench and wrote: “God bless Birmingham.

“In the 20 minutes we filmed Ryan on this bench passers-by gave him a hot drink, two chocolate bars and a lighter – without him ever asking for anything.”

After the painting was confirmed as a genuine Banksy, fans flocked to the site outside the Jewellery Quarter train station to take photos with the artwork.

But after several hours, West Midlands Police were forced to erect metal barriers as a matter of “crowd control” to stop people sitting on the bench.

A spokeswoman for the force said: “We’ve been called just to monitor the situation due to the number of people heading down there.

“We are just keeping an eye on the situation. Its more of a crowd control matter.”

One fan who was lucky enough to get a picture before the barriers were erected was Laura Matts, 32, an officer worker, from Kings Heath, Birmingham,

She said: “Its so exciting to have a Banksy here in the city.

“I work in the Jewellery Quarter and it popped up over the weekend. Apparently, there was a whole team of them with a white screen. It was all very secretive.

“It conveys an important message as well, homelessness is a big issue in Birmingham and I’m glad its being highlighted by a world famous artist.”

Maciej Woyton, a 19-year-old business and management student at Aston University, added: “I’ve been following Banksy for years and when I saw he posted on Instagram I knew I had to find it.

“I have a friend who lives in the Jewellery Quarter and he told me where it was so I headed down there straight away to get a picture with it.

“It is a powerful bit of art and I know homelessness is a major issue in Birmingham. I wonder if there’s a political message to it being unveiled so close to the election.”

Pete Smith, who owns Vault 88 jewellery shop opposite the painting, said: “The world and his mother is outside.

“There’s been people taking pictures of themselves on the bench. It’s brilliant. It’s very, very clever.”