The poster for Go Vegan World featured a mouse touching a human hand with the words "They trust us. We torture them for research." 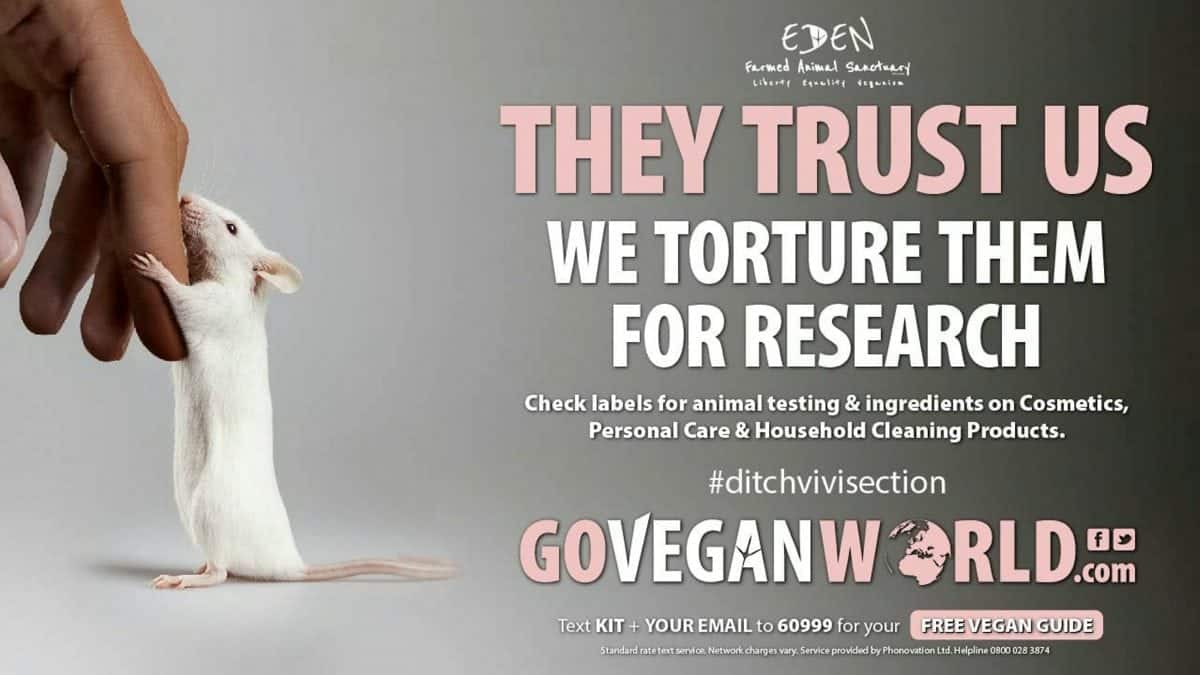 A vegan campaign group’s ad claiming that animals suffer “torture” in the name of research has been given the all clear despite a complaint from a scientist.

The poster seen on a London bus for Go Vegan World featured a mouse touching a human hand with the words “They trust us. We torture them for research.”

A medical research scientist complained to watchdogs that the claim “we torture them for research” was “misleading”.

But the advert was given the all clear following an investigation by the Advertising Standards Authority.

Go Vegan World said that the ad was designed to remind the public that animals used in research had the capacity to experience and feel pain.

The group said that every minute of every day, seven animals were used for animal testing research in the UK for a variety of purposes such as toxicity tests and medical research including genetic modification.

They emphasised that the ad did not specify a particular type of research because they believed that all research on living animals caused pain and suffering.

Although an EU ban on animal testing for the purpose of cosmetic products existed, they argued that it was not a complete ban.

They provided extracts from a declaration signed by a group of neuroscientists and a paper on fish sentience which concluded that animals could generate consciousness. 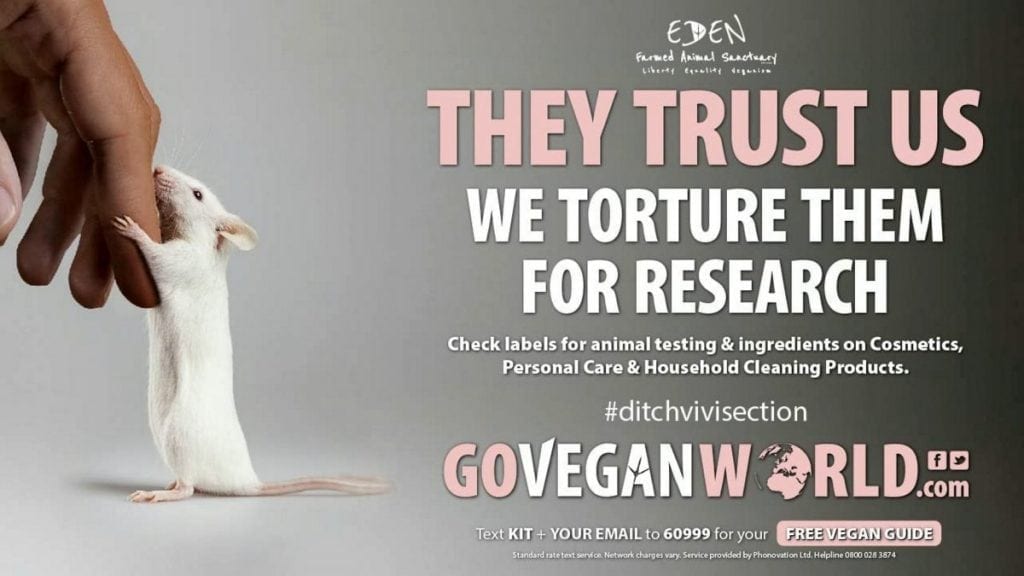 Go Vegan World also referred to the 2016 severity assessment and classifications on experimental procedures by scientists.

The statistics showed that 81 per cent – around 1.63 million – of experiments carried out in the UK involved the infliction of pain and suffering on an animal greater than the pain caused by the insertion of a hypodermic needle.

The group said that 695,000 of experiments were reported to involve moderate to severe pain and suffering which they said was comparable to an operation or long-term disease.

Go Vegan World claimed that no experimentation on animals could be justified.

The ASA investigated the ad under rules regarding misleading advertising and substantiation, but did not find it in breach.

An ASA spokesman said: “While we acknowledged that torture in certain contexts referred to the infliction of pain that was unnecessary, gratuitous and extreme, in this context, we considered that readers would understand the claim ‘torture’ to be Go Vegan World’s own emotive and expressive representation of the pain inflicted on animals.

“While readers would appreciate that the ad represented Go Vegan World’s own perspective, we considered they would nevertheless understand from the ad that a significant number of animals in animal testing and experiments would experience pain, suffering and harm as part of that process.

“We understood that the Home Office published annual statistics on the severity assessments of the pain, suffering or lasting harm experienced by animals in scientific procedures in Great Britain.

“The severity reports from the 2016 statistics on experimental procedures showed that 46 per cent of animals, 938,000, were assessed as mild which meant that the animal experienced short-term mild pain, suffering or distress with no significant impairment of the well-being or general condition of the animal.

“Those statistics showed that 81 per cent of experimental procedures involved the infliction of pain and suffering on an animal, greater than the insertion of a needle into their body.

“We considered that the statistics sufficiently demonstrated that some animals involved in experimental procedures during 2016 experienced a degree of pain and suffering through research and this justified the use of the claim in the ad.

“We therefore concluded that the ad was unlikely to materially mislead readers.”