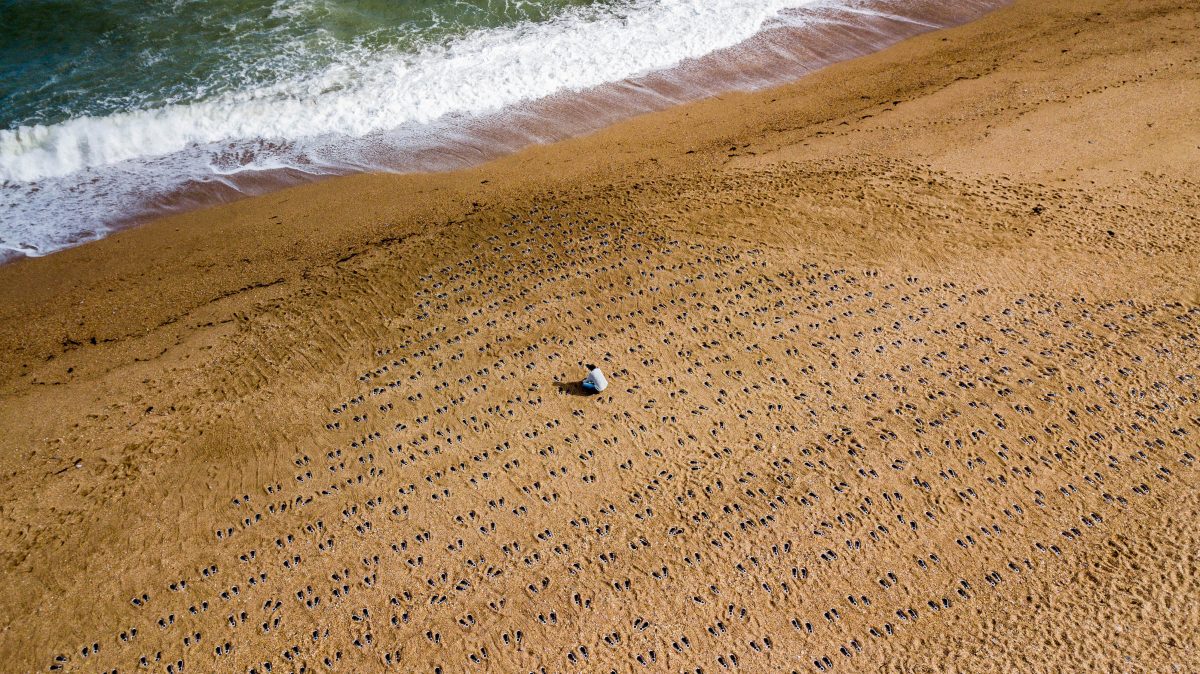 Exercise Tiger took place in April 1944 as a rehearsal for the Allied Force’s D-Day Normandy invasion.

But more people died during the exercise than in the D-Day landing at Utah Beach – with 749 American GIs and sailors losing their lives on a tragic morning after they were torpedoed by fast-moving German E-boats.

Many soldiers sank and drowned during the exercise. They were weighed down by their heavy kit and sodden clothes.

The haunting episode was kept quiet over fears the Germans would realise the exercise had been planned as a rehearsal for D-Day, which would take place five weeks later.

To commemorate the 75th anniversary of Exercise Tiger and remember its victims, charity ‘There But Not There’ has installed a moving memorial made up of 749 pairs of bootprints on the beach at Slapton Sands, in South Devon where they perished.

Hundreds of American troops who were killed when a top secret World War Two training exercise went wrong have been honoured at the English beach where they perished.

The installation, over 50 metres long, was unveiled yesterday.

Woody Johnson, the United States Ambassador to the United Kingdom, praised the soldiers who died during the exercise.

He said: “For a long time, many people had no idea that so many hundreds of American servicemen lost their lives on the coast of Slapton Sands as they rehearsed for the D-Day landings.

“Those men did not die in vain.

“Their sacrifices paved the way for their comrades to succeed on the beaches of Normandy and begin the liberation of Europe from Nazi tyranny.”

However, a group of German E-Boats were alerted to the convoy and torpedoed the slow-moving ships.

With no British Navy destroyer to escort the American GIs, the consequences were catastrophic, with the final death toll considerably more than the number who died storming Utah beach in Normandy.

Among the dead was Sergeant Louis Archer Bolton, a 19-year-old newlywed from Iowa.

He was in the tank deck on board LST 531, when it took a direct hit by two torpedoes. His body was never recovered.

His niece, Laurie Bolton, was among those at the event. She said: “My uncle was in the US Army, 607th Graves Registration Company, 1st Platoon.

“His platoon of 19 men was attached to the 3206th Quartermaster Service Company, and was going to be in charge of burying the dead on Utah Beach on D-Day.

“Only five men from his platoon survived Exercise Tiger. He was just 19 years old when he died and a newlywed, only having been married for just under a year. I was born on his birthday eight years after he died.”

The bootprint installation is the brainchild of Martin Barraud, the artist behind last year’s ‘There But Not There’ campaign to mark the centenary of the end of WW1.

Commemorative bootprint plaques, made by veterans, can be bought for £29.99 with money raised from the campaign going towards programmes supporting veteran employment projects.

Each of these plaques represents one of the 22,763 British and Commonwealth servicemen and women who were killed on D-Day and during the Battle of Normandy in the summer of 1944.

Martin, who is chair of ‘There But Not There’, said: “These plaques are made by veterans, to commemorate the veterans of 75 years ago and will help support the veterans of today, back into employment.

“Last year our Tommy campaign captured the hearts of the nation, whilst giving a boost to the mental health and wellbeing of veterans across the UK.

“A year on and we’re hoping the Great British public will get behind our D-Day 75 campaign by purchasing their own bootprints to mark the great sacrifice of our WW2 heroes, in particular those who helped kick-start the liberation of Europe with the invasion of Normandy on D-Day.”

Also at the unveiling was Pam Wills, from Devon, who was just 10 years old when Exercise Tiger took place on her doorstep.

She lived near Slapton Sands and her family was evacuated before the exercise began.

Miss Wills, who remembers talking to American servicemen stationed nearby, said: “The US soldiers came over and talked to us, they gave us sweets and comics, but they then suddenly disappeared.

“We didn’t know Exercise Tiger had taken place, but my father, who was in the Royal Observer Corps watching for enemy aircraft, saw ambulances going to and from Slapton Sands, so we knew something was wrong.

“We knew something was going on but no one knew exactly what at the time. What a waste of life. Maybe if they had broken radio silence there wouldn’t have been as many deaths, but who knows.

“It is so sad to think that so many young men lost their lives. It was a terrible event.”

Associate professor Harry Bennett, a historian from Plymouth University, added: “There were losses day in, day out, whether it was in Africa, down at Plymouth, on the Eastern Front, in the Northern Atlantic. The drip, drip, drip of lives being lost was enormous.

“Exercise Tiger was a terrible event with 749 deaths and it gets lost in history.

“With Tiger you had 749 people whose lives were washed away and this installation gets people to think about something in a different way.

“Any new means which encourages the public to think about what happened to previous generations, to ordinary people is a good thing.”

Alongside the bootprint plaques which are being sold, ‘There But Not There’ is also raising funds for the veteran community by selling commemorative D-Day boot vinyl prints for £4 each.

The prints can be set down in public spaces to create a powerful act of remembrance for those who fought to liberate occupied Europe 75 years ago.