Officials needed to “take a long look at themselves” over what had gone wrong. 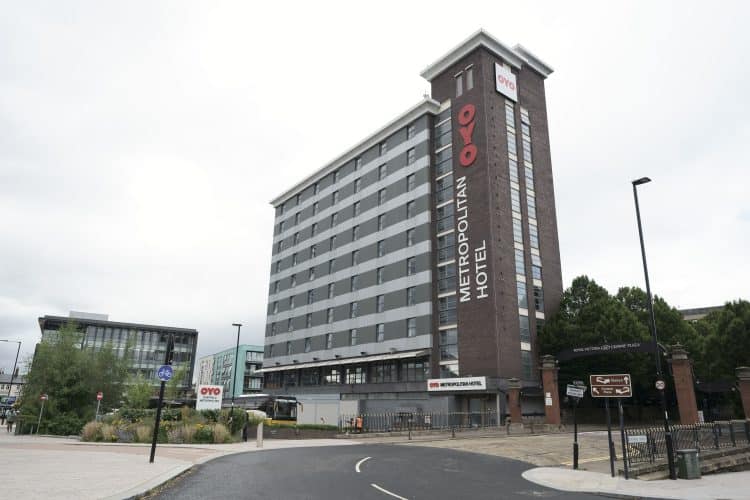 A view of the OYO Metropolitan Hotel in Blonk Street, Sheffield. Credit;PA

Asylum seekers were previously removed from the hotel where a five-year-old Afghan refugee fell to his death from a window because it was unfit for refugees to stay in, it has been claimed.

Mohammed Munib Majeedi fell from the window of the Sheffield Metropolitan Hotel in Blonk Street at around 2.30pm on Wednesday.

The youngster, who is understood to have arrived in the UK with his family this summer, fell on to a car park behind the hotel.

Labour MPs in the city demanded a “full, urgent, independent inquiry” after asylum seekers were previously moved out of the accommodation.

Labour shadow frontbencher Louise Haigh, who is also MP for Sheffield Heeley, said: “The Home Office has a duty of care when placing asylum seekers of any description, but especially under their resettlement scheme, here in the UK, and clearly that duty of care has been at the very least undermined, if not breached.”

Ms Haigh and fellow Sheffield MPs Clive Betts (Sheffield South East), Olivia Blake (Sheffield Hallam), Paul Blomfield (Sheffield Central), and Gill Furniss (Sheffield Brightside and Hillsborough) have written to Home Secretary Priti Patel. They are calling for a “full, urgent, independent inquiry into the circumstances that led to Mohammed’s death, but also into the placement of vulnerable refugees in this accommodation”.

She told the PA news agency: “We know that the Home Office placed some refugees there last August, in 2020, and then moved them following concerns about the suitability of that accommodation.

“So why vulnerable families from Afghanistan, involving children, were placed in this accommodation again this year is a very serious question that they have to urgently answer.”

It is understood previous concerns had been surrounding fire safety.

Sheffield City Council confirmed that the Home Office had ceased use of the hotel in November.

The Home Office did not deny the claims when approached for comment but said: “We are extremely saddened by the tragic death of a child at a hotel in Sheffield. The police are providing support to the family while the investigation continues and we are providing accommodation and support.

“We are absolutely committed to ensuring that Afghan refugees are appropriately accommodated and supported and we are working hard with local authorities to deliver this.”

Ms Haigh said the fact that all remaining families had been removed from the hotel “demonstrates that they know that is unsafe and unsuitable”.

And she added: “It’s just absolutely appalling that the family had fled unimaginable horror in Afghanistan, to come to this country seeking safe haven, find themselves placed in unsuitable accommodation, and now have to face this tragedy of equally unimaginable proportions.”

The Refugee Council has also called for a review of the accommodation offered to those fleeing the Taliban following the tragedy.

A spokesman for the Afghan Community Association in Sheffield said: “Whether it was a mistake or something, I don’t know, but what happened is not acceptable at all.”

Liberal Democrat peer and former leader of Sheffield City Council, Lord Scriven, said officials needed to “take a long look at themselves” over what had gone wrong.

He told PA: “These refugees are fleeing from some of the most horrendous and traumatic experiences one could ever begin to imagine. So why on earth the Home Office thinks it is acceptable to put them into a hotel that they’ve already withdrawn previous vulnerable people from, is jaw-dropping.

“The council should not have stayed quiet about this, but should have made it very clear on our soil, in Sheffield, as the first city of sanctuary, this wasn’t good enough.

“Senior officials and the Home Secretary need to take a long look at themselves in the mirror tonight and question their conscience as to why they feel it was acceptable.”

Witnesses said the boy’s father had worked in the British Embassy in Kabul.

He said the family came to the UK three or four weeks ago, landing at Birmingham Airport, then staying in Manchester during quarantine for Covid.

The family, including the parents and three boys and two girls, then moved to the hotel in Sheffield in the last week.