Washington correspondent Nomia Iqbal said the Ukrainian ambassador’s statement was "one for the history books." 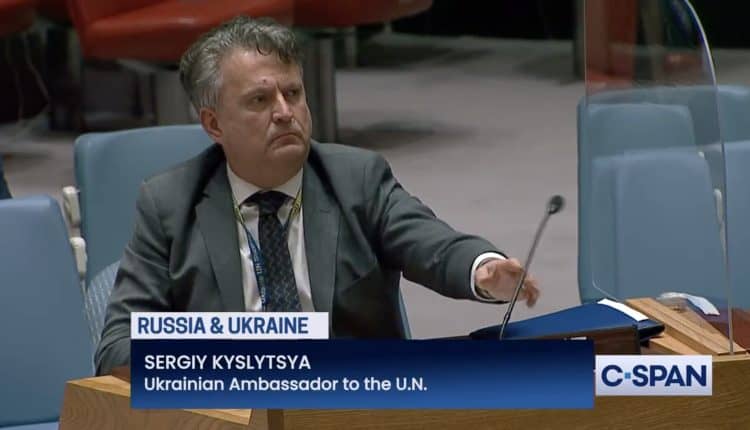 The Ukrainian ambassador to the United Nations has sparked hundreds of reactions after telling his Russian counterpart that “war criminals go straight to hell”.

Sergiy Kyslytsya called for Russian Ambassador Vasily Nebenzya, who is serving as the President of the UN’s Security Council for February, to “reliquish” his duty as a chair as he told the Council that Russia has “declared war on Ukraine”.

“Call Putin, call Lavrov, to stop aggression,” Kyslytsya said, adding: “And I welcome the decision of some members of this council to meet as soon as possible to consider the necessary decision that would condemn the aggression that you launched on my people.

“There is no purgatory for war criminals. They go straight to hell ambassador.”

But Nebenzya rejected claims that Russia is being violent against its neighbour, saying instead that its aggression is targetting Ukraine’s leaders and labelling them “junta” – meaning a military or political group that takes power over a country by force.

“I want to say in conclusion that we aren’t being aggressive against the Ukrainian people but against the junta that is in power in Kyiv,” Nebenzya said.

Washington correspondent Nomia Iqbal said the Ukrainian ambassador’s statement was “extraordinary”. “One for the history books,” she said.

“I’m glad the Russians are being very considerate, cautious and safe by wearing masks before they launching missiles killing numerous people,” one Twitter user said after noticing Nebenzya was wearing a mask during the icy exchange with Ukraine’s ambassador.

“This is the most diplomatic ‘go fuck yourself’ I’ve ever heard,” another Twitter user concluded after watching Ukraine’s intervention.

Nebenzya also defended Russia’s decision to take military action in Ukraine’s Donbas region, by saying it is protecting pro-Moscow residents in eastern Ukraine, “who for eight years have been cowering from Ukraine’s shelling”.

He claimed Russia is allowed to act in the current context as “self-defence” under article 51 of the UN charter.

He said: “The root of today’s crisis around Ukraine is the actions of Ukraine itself, who for many years were sabotaging its obligations [under the Minsk agreement].”

He added Ukrainian “provocation” has “not stopped but has intensified”, a statement meant to justify Russia’s intervention as separatists in Luhansk and Donetsk reportedly asked for Russian assistance. Meanwhile, Putin has also declared the two regions as independent states.

But the US warned Russia may use disinformation such as Ukraine attacking Russians, in order to have an invasion pretext.