The fight over Hans Island has been contested with Canadian Club, Schnapps and now Danish-produced Stauning Whisky. 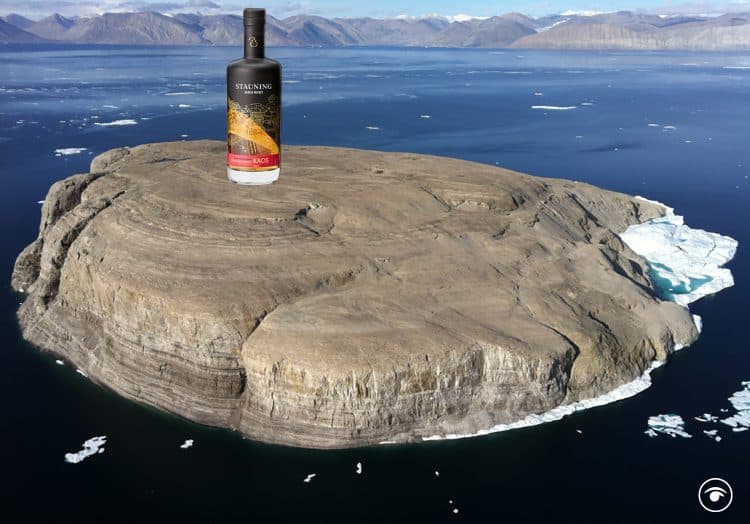 A Danish whisky brand has reignited a territorial dispute with Canada, threatening to halt its production in an attempt to solve a decades-old dispute.

The uninhibited Hans Island, which lies smack dab in the middle of the Nares Strait between Canada and Greenland, an autonomous territory of Denmark, has been contested since 1930 due to the fact that it lies within the 12-mile territorial limit of either shore, allowing both sides to claim it under international law.

Canada and Denmark set out to establish a definitive border through the strait in 1973, but they couldn’t agree on what to do about Hans Island, so they left the issue aside to be resolved later.

But things got choppy in 1984 when Canadian troops visited the island, planted their nation’s flag and left another symbolic marker as well: a bottle of Canadian whisky.

This infuriated the Danes, who retaliated by replacing the items with a Danish flag and a bottle of Danish schnapps, along with a note saying “Welcome to the Danish island.”

In 2018 the Danish government even appointed a committee responsible for coming up with different solutions to solve the conflict over Hans Island, yet they are still no closer to answers, which has resulted in yet another spirit stepping up to the plate in an attempt to find a settlement.

Stauning Whisky, a single malt & rye producer based out of the western part of Jutland, announced this week that it would be deliberately stopping the production of its whisky in a bid to draw the world’s attention to the dispute and resolve the matter once and for all.

Stauning is also encouraging fellow whisky distillers around the world to join them in halting the production of their whiskies and join them in the #whiskypeace initiative.

Alex Munch, one of the co-founders of Stauning says “We may spend a lot of time in the distillery, but we didn’t learn about the story of Hans Island until recently. Whisky is not about hostility but the exact opposite.

“It’s about friendship and curiosity – and we won’t accept that there’s a war going on between Denmark and Canada in the name of whisky. So, we want to put renewed pressure on the two governments to proceed with the negotiations and put a stop to it. ”