"This tweet will go down in the history books in the future," wrote one person on Twitter. 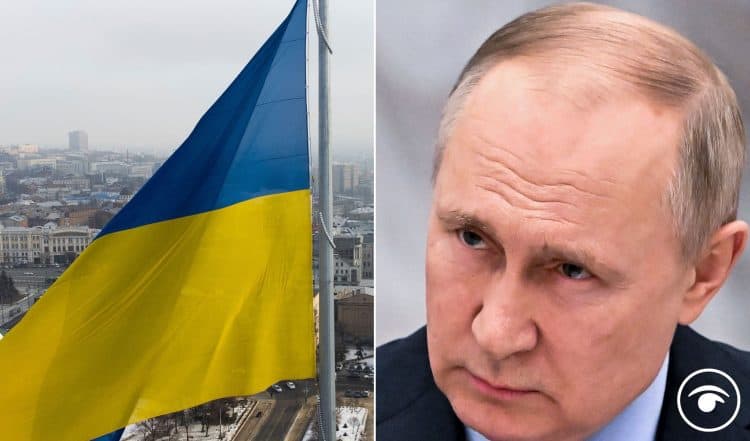 Nato has agreed at emergency talks to further beef up its land, sea and air forces on its eastern flank near Ukraine and Russia after President Vladimir Putin ordered a military offensive in Ukraine.

“We are deploying additional defensive land and air forces to the eastern part of the alliance, as well as additional maritime assets,” Nato ambassadors said in a statement.

“We have increased the readiness of our forces to respond to all contingencies.”

Ukrainian president Volodymyr Zelensky has urged citizens to defend the country from Russia – and promised weapons would be issued to anyone who comes forward.

It comes as Ukraine’s official Twitter account has shared a caricature of Adolf Hitler and Vladimir Putin smiling at each other.

The account then added: “This is not a ‘meme’, but our and your reality right now.”

The political cartoon quickly racked up a huge number of retweets.

UK will not ‘look away’

Meanwhile, Boris Johnson has vowed that Britain “cannot and will not just look away” as Vladimir Putin launched an invasion of Ukraine and pledged to unite with allies to respond with a massive package of sanctions designed to “hobble the Russian economy”.

In a televised address to the nation at midday, the Prime Minister said the world could not stand by and allow the freedom of Ukraine to be “snuffed out” as Moscow hit its neighbour with a wide-ranging attack, hitting cities and bases with airstrikes or shelling.

“This act of wanton and reckless aggression is an attack not just on Ukraine, it’s an attack on democracy and freedom in eastern Europe and around the world,” Mr Johnson said.

He spoke from No 10 after chairing an urgent Cobra emergency committee meeting on Thursday morning, and is scheduled to speak to the Commons in the evening.