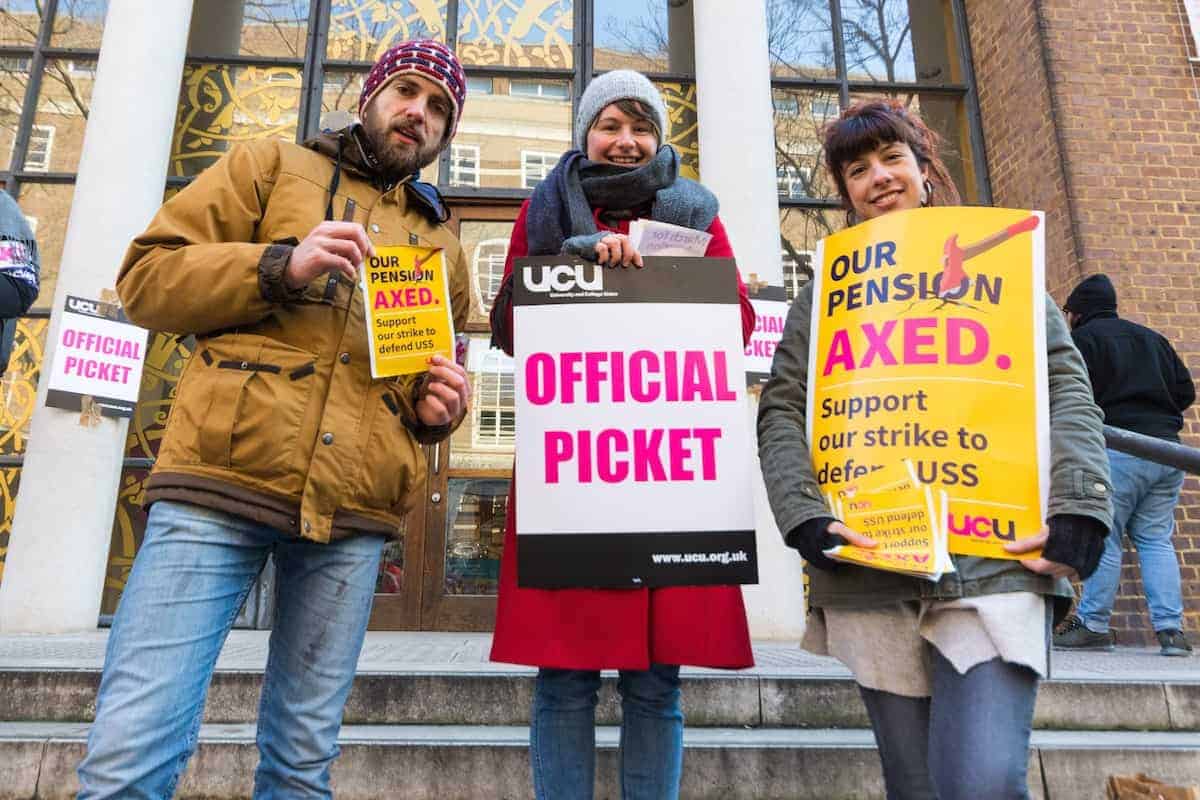 Students and lectures man picket lines and hold a rally on the steps of SOAS (School of Oriental and African Studies) at UCL. Students and staff at UCL man picket lines as and estimated 40,000 University and College Union (UCU) lecturers and academics across the UK strike over changes to their pensions. The strike is the first in a planned series of 14 days of walkouts. UCL, London, February 22 2018.

Union leaders trust bosses less in Britain than any other EU country, according to new research.

Fewer than two in three (64 per cent) have any faith in management compared to an average of more than eight in 10 (84 per cent) on the rest of the continent.

The lack of confidence hits their financial performance – raising possible implications after Brexit on October 31st.

On the other hand managers’ trust in workers’ representatives was higher, reaching 93 per cent.

Professor Bernd Brandl, of Durham University Business School, said: “The gap in trust between is particularly wide, as trust of the management in the employee representation is in line with the EU average of 91 per cent, but trust in the management is exceptionally low, at 64 percent.”

The reason was due to “idiosyncratic country differences” rather than anything he studied, such as size of businesses or the education level of the workforce.

Prof Brandl also found companies did better where both managers and staff had trust in each other. This was not the case when it was only ‘oneway’.

Less than six in ten UK firms (57 per cent) had some mutual trust between both groups compared to more than three-quarters across the EU (77 per cent). Only Spain and Portugal rated lower.

Prof Brandl said: “Trust between employees and their representatives and the management is usually beneficial for many reasons.

“If the employee and employer side have trust in each other, the quality and quantity of communication between the two sides is intensified, which in turn fosters problem solving behaviour, their willingness to compromise and therefore enables bargaining outcomes which are in both their long term mutual interest.

“Mutual trust in particular can be pivotal for the efficacy of the employment relationship and decisive for the success or failure of companies.”

Around eight per cent of UK firms had “strong” mutual trust between staff and managers, which was around average, but well behind countries like Estonia (28 per cent).

The findings, presented at a European Sociological Association conference in Manchester, were based on an analysis of data on 22,000 companies in 28 EU states.

It charted the level of mutual trust between managers and workers’ representatives, such as union officials or other elected members.

Prof Brandl relied on the European Company Survey, which asked union leaders and managers how strongly they agreed or disagreed with the statement the other side could be trusted.

The study also found mutual trust varies significantly across countries with levels being relatively higher in Scandinavia and eastern Europe than Mediterranean countries.

Management were more trusting than union leaders in all countries, apart from Lithuania.

Larger companies were less trusting environments than smaller ones. The number of layers of management, the age of the staff and their education had no effect. But having more women was linked to a small increase.