The couple were filmed laughing and smiling as someone replaced the bride’s helmet with a white veil. 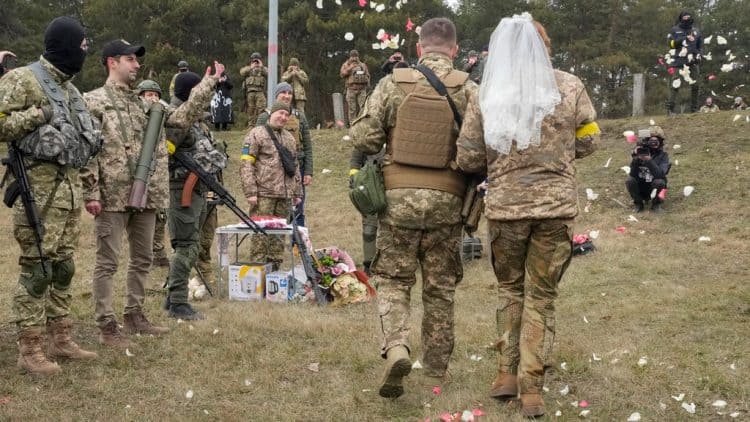 A Ukrainian couple fighting on the frontline of the war with Russia have tied the knot alongside their fellow soldiers near a checkpoint in Kyiv.

On Sunday, Lesia Ivashchenko and Valerii Fylymonov, both members of the Ukrainian Territorial Defence Forces, were serenaded by their fellow fighters as they were married, with Lesya holding a bouquet of flowers as both of them drank from champagne flutes.

The couple were filmed laughing and smiling as someone replaced the bride’s helmet with a white veil.

One of the soldiers appeared to be wearing an Orthodox Christian cross while he read from a booklet as the newlyweds knelt down in front of him.

A minute-long clip of the ceremony has since been viewed more than 1.7 million times, garnering more than 55,000 likes and thousands of comments congratulating the couple.

“So inspirational. So moving. Please let them survive and triumph over pure evil,” wrote one person.

“I hope they will live to celebrate many happy anniversaries. Watching this gave me chills and brought tears to my eyes,” another added.

Kyiv mayor Vitali Klitschko came across the wedding when he visited a battalion of the Ukraine Territorial Defense Force on the same day.

Sharing a video of the ceremony on social media, the former boxer turned politician said that he will “protect the life of Kyiv, Kyivites and our state”.

“They have been living in a civil marriage for a long time, and now they have decided to get married,” Mr Klitschko added.