“Prit Patel is winning, we’re not going to be getting many people into our country despite the fact that one hundred and fifty thousand people have volunteered to open up their homes." 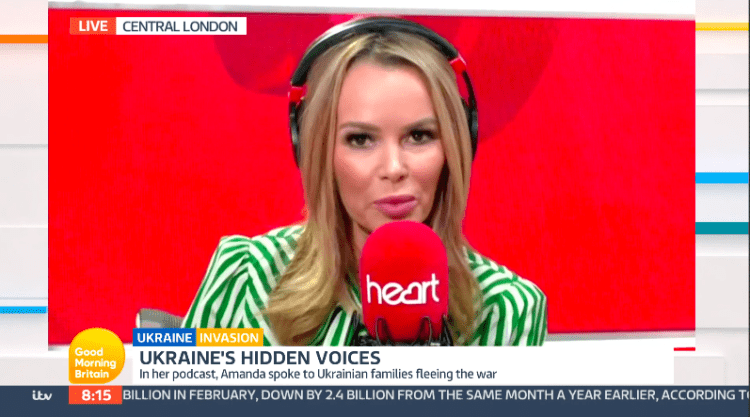 She spoke to hosts Susanna Reid and Martin Lewis about having returned from Ukraine where she has been recording her new podcast, which provides regular Ukrainians with a voice.

Speaking of her trip, she revealed: “It was very overwhelming” and described the people of Ukraine as “so pragmatic, as well as being distressed.”

Amanda revealed: “I came home and I said to my own children, I can’t imagine what you and I would pack into a bag, how we would feel about leaving Daddy behind and then have to make a snap decision about what country we would want to go and live in. It’s just a horrendous situation for them all.”

And of the Home Secretary, she suggested: “Prit Patel is winning, we’re not going to be getting many people into our country despite the fact that one hundred and fifty thousand people have volunteered to open up their homes. I felt quite cross about that, to be honest.”

Martin then read out a statement from the Government: “We are moving as quickly as possible to ensure those fleeing horrific persecution in Ukraine can find safety in the UK and our Homes for Ukraine scheme now allows those without family connections to come here.”

Priti Patel warned that Vladimir Putin might try to use women and children to infiltrate the UK as she defended the decision not to drop security checks on Ukrainian migrants.

The Home Secretary said the British people “will open our homes and our hearts to Ukrainians” but security could not be compromised.

The European Union has allowed visa-free travel for Ukrainians fleeing the conflict, but Ms Patel defended her approach in a speech at the Tory Party spring conference.

The vast majority of those fleeing are women and children, but Ms Patel said it would be “naive and misguided” to think that Russian agents could not be amongst them.