by April Curtin
in News 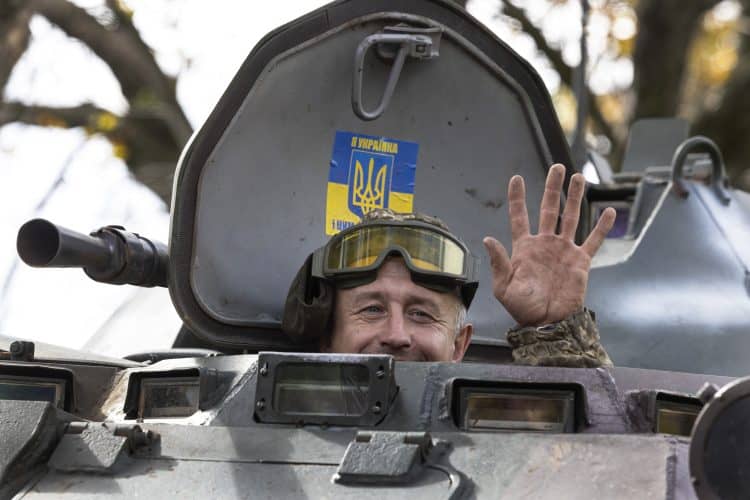 A soldier waves from an armoured personnel carrier in the Donetsk region on October 4, 2022 as Ukrainian forces press forward and force Russia to retreat (Image: Getty)

The collapse of the Russian army could see the war in Ukraine end differently than anticipated.

President Vladimir Putin’s forces have struggled as a result of poor training, equipment and leadership. Recent reports of Russian soldiers fighting while drunk suggests morale hasn’t improved much either.

Meanwhile, Ukrainian forces have been advancing, with troops reported to be within artillery rage of a key Russian supply road. In an update on Wednesday morning, Britain’s Ministry of Defence said: “It is highly likely that Ukraine can now strike the key Svatove-Kremina road with most of its artillery systems, further straining Russia’s ability to resupply its units in the east.”

Putin may have claimed to have annexed four regions of Ukraine in late September, in a ceremony branded “illegal” by the international community who refused to recognise his claims. But the following day, Russian forces retreated from two of those regions – Lyman in the east and Kherson in the south – as Ukrainian soldiers pressed forward and reclaimed these areas. This was following weeks of observing and learning about their enemies.

Weapons provided by the West have helped Ukrainian soldiers to an extent, but it is the training, political leadership and determination to save their people that has kept them fighting.

While most wars end through negotiations, The Telegraph‘s Dominic Nicholls argues Ukraine’s “operational design coupled with superior generalship” could see these soldiers buck the trend, with victory being decided on the battlefield.