The Home Office said Afghans who worked with the British will be able to move to the UK permanently. 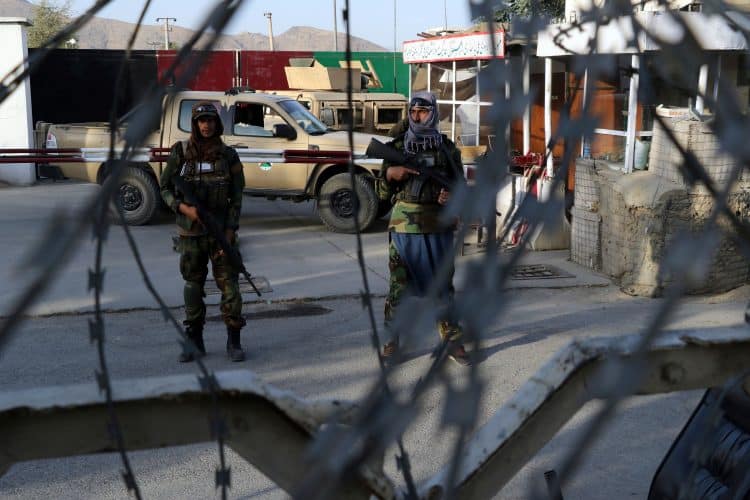 UK officials and the Taliban are in talks over how to secure “safe passage” out of Afghanistan for British nationals and Afghan allies.

Downing Street confirmed Sir Simon Gass, the prime minister’s special representative for Afghan transition, has travelled to Qatar and is meeting with “senior Taliban representatives” to stress the importance of allowing people to leave Afghanistan.

The news emerged as the Foreign, Commonwealth and Development Office (FCDO) announced 15 crisis response specialists are being deployed to Pakistan, Uzbekistan and Tajikistan to assist British diplomats in their work to allow people to escape Afghanistan over land borders and reach the UK.

The officials are expected to arrive within the next 48 hours, with the focus on helping UK nationals, interpreters and other Afghans who were employed by the UK, and those Afghans judged most at risk.

Elsewhere, the Home Office said Afghans who worked with the British government and military will be able to move to the UK permanently.

Former Afghan staff and their family members eligible for the Afghan Relocations and Assistance Policy (Arap), which prioritises relocation to the UK for current or former locally employed staff who have been assessed to be under serious threat to life, will be given immediate indefinite leave to remain as opposed to only five years’ temporary residency as previously permitted.

It is part of the government’s Operation Warm Welcome, which is designed to help Afghans rebuild their lives in the UK.

The number of UK nationals left behind in Afghanistan is in the “low hundreds”, Foreign Secretary Dominic Raab said on Tuesday.

He was unable to give a “definitive” figure on how many Afghans the UK had failed to airlift to safety after the Taliban seized power as the US withdrew its final troops following a 20-year mission.

But in a further sign of the swift power shift in the region, Downing Street confirmed Sir Simon’s talks with the Taliban.

A No 10 spokesman said: “The prime minister’s special representative for Afghan transition, Simon Gass, has travelled to Doha and is meeting with senior Taliban representatives to underline the importance of safe passage out of Afghanistan for British nationals, and those Afghans who have worked with us over the past 20 years.”

MI6 chief Richard Moore held talks with the Pakistan military on Afghanistan in recent days, according to media reports in Pakistan.

The Daily Telegraph also reported secret discussions have taken place between senior British intelligence officials and the Taliban in Kabul in the past fortnight.

The newspaper said the aim of the talks was to seek assurances that Afghanistan will not be used to launch terrorist attacks on the west.

On the deployment of three teams to bolster efforts to help people cross the Afghan border, Raab said: “The UK evacuated over 15,000 people from Afghanistan over the past fortnight, but we know not everyone who wanted to leave and were eligible for UK support could.

“We will stand by them, and we’re working with partners in neighbouring countries to support onward travel to the UK.

“These latest rapid deployment teams will bolster those efforts and reinforce our embassy teams on the ground to help those in need.”

Raab will also face MPs on Wednesday to discuss the Government’s handling of the Afghanistan crisis.

With doubts about his future as foreign secretary, No 10 insisted Boris Johnson has “full confidence” in Raab. Some of the ire was for remaining in holiday in Crete as the Taliban was seizing back control of Afghanistan.

Raab will be quizzed by the Commons Foreign Affairs Committee, with shadow foreign secretary Lisa Nandy insisting her counterpart has questions to answer on “much more than the chaos of the last two weeks”.

She said: “This has been the biggest foreign policy failing in a generation. The foreign secretary has serious questions to answer when he appears before the Foreign Affairs Committee.”

Nandy added: “The foreign secretary had 18 months to prepare but was missing in action. As a result, on his watch Britain has become weaker in the world and faces greater risks from terrorism.”