In a speech today, Matt Hancock is expected to praise the central role of the NHS in the vaccine rollout. 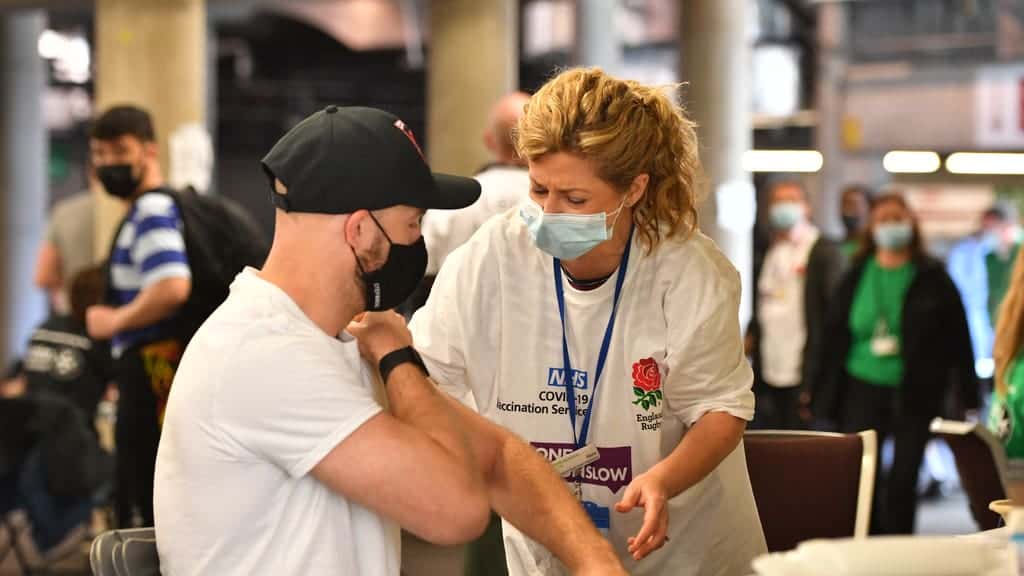 The UK is on the brink of reaching the milestone of three-quarters of adults receiving their first Covid-19 vaccine, amid debate over ending restrictions.

It is expected to come the day after no deaths within 28 days of testing positive for Covid-19 were reported for the first time since July 30 last year.

Latest Government data suggests that so far, more than 39.4 million people had received their first dose – equating to 74.9% of adults.

In a speech on Wednesday, Health Secretary Matt Hancock will praise the central role of the NHS in the vaccine rollout and say the Government “backed lots of horses”, investing “at risk” in different projects.

His comments come amid continuing debate over whether the final stages of unlocking restrictions in England can go ahead later this month due to concerns over the spread of the Indian variant.

Mr Hancock will speak at the Jenner Institute in Oxford ahead of the UK-hosted G7 Health Ministers’ meeting later this week.

He is expected to say: “Even before the first Covid-19 case arrived in the UK we’d started the work on how to develop, procure and roll out the vaccines that would ultimately make us safe.

“I was told a vaccine had never been developed against any human coronavirus. We dared to believe … and we started early.

“We put out a call for research in February. By March, we were supporting six different projects, including the Oxford vaccine, alongside the vital work on treatments – including the Recovery trial, which led to the discovery of dexamethasone, the first proven treatment to reduce coronavirus mortality. These two projects, together, have already saved over a million lives.”

NHS has “deserved every plaudit that has come its way”

Mr Hancock will say: “The biggest risk would have been the failure to find a vaccine at all. So we explicitly embraced risk early on. So we backed lots of horses and invested at risk.

“And instead of sitting back and waiting to see which vaccines came off, we were tenacious in helping them to get over the line, drawing on the abundant industry experience in our team.”

The Health Secretary is also expected to outline how the NHS has “deserved every plaudit that has come its way”, as well as the country’s “scientific strength”.

Downing Street has indicated that Boris Johnson still sees nothing in the data to suggest the plan to end all legal lockdown restrictions in England on June 21 will need to be delayed.

The latest death tally is likely to feed into ministers’ considerations on easing restrictions.

They will also consider that the announcement on zero deaths comes after a bank holiday weekend, so there may be a delay in the reporting of the figures.

Experts are divided over whether the final stage of easing social restrictions should go ahead amid a surge in cases of the new variant first identified in India.

Professor Adam Finn, of the Joint Committee on Vaccination and Immunisation (JCVI), said there are still many people who are vulnerable to the effects of Covid-19, as he warned “the idea that somehow the job is done is wrong”.

Professor Ravi Gupta, a member of the New and Emerging Respiratory Virus Threats Advisory Group (Nervtag), said a delay of a few weeks could have a significant impact on Britain’s battle against the pandemic and recommended it should be made clear to the public that it would be a temporary measure based on the surge in cases of the new variant.

And Pat Cullen, acting general secretary and chief executive of the Royal College of Nursing, urged ministers to watch the data, adding: “As the NHS starts the road to recovery now is the time to take cautious steps and not take an unchecked leap to freedom.”

However, Robert Dingwall, professor of sociology at Nottingham Trent University, said it was important to press ahead with the June 21 easing from a societal point of view.

He told Times Radio: “I personally don’t see any case for delay … from a societal point of view, I think it’s really important that we go ahead on June 21 and I’ve not really seen anything in the data that would lead me to doubt that as a proposition on the evidence to date.”

In Scotland, First Minister Nicola Sturgeon pressed pause on plans to ease Covid restrictions in much of the country.

She announced on Tuesday that while parts of the country will move to Level 1 of the Scottish Government’s coronavirus restrictions from Saturday, much of the central belt including Edinburgh, Dundee and Glasgow will be kept in Level 2.

Ms Sturgeon insisted the country was still at a “delicate and fragile point” in the battle with the virus, in an announcement on restrictions which she described as a “mixed bag”.

Scotland’s clinical director, Jason Leitch warned the Indian variant “is causing us some challenge and is spreading quicker than we hoped”.