By Joe Mellor, Deputy Editor It has been claimed that fundamentalist Christian schools in the UK are teaching children that being homosexual is unnatural and girls have to obey men. Ex-pupils have turned whistleblowers and have come forward to say that various private schools across the UK are teaching these old fashioned prejudices during lessons, […] 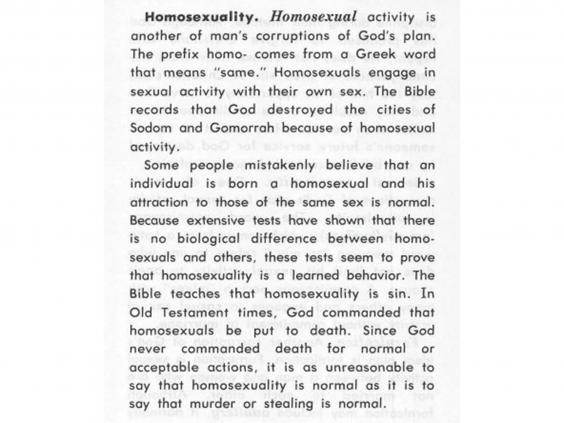 It has been claimed that fundamentalist Christian schools in the UK are teaching children that being homosexual is unnatural and girls have to obey men.

Ex-pupils have turned whistleblowers and have come forward to say that various private schools across the UK are teaching these old fashioned prejudices during lessons, reports the Independent.

The people who have come forward have said that the textbooks they use told them that creationism is actually a fact, women have to obey men and being gay is immoral.

A an anonymous former pupil, who wanted to protect their identity said: ‘No one outside the schools knows about what happens inside them, that’s why they’ve been able to go on like this for so long.’

Of the various textbooks they use on their syllabus, called “Accelerated Christian Education,” supposedly includes some very worrying content regarding homosexuality.

It states: ‘Homosexual, adjective: having unnatural sexual feelings towards one of the same sex… Homosexual activity is another of man’s corruptions of God’s plan.’

The text book also states wives must ‘obey, respect and submit to the leadership of their husbands’. These teachings may seem very outdated to large sections of society. There are also fears that the Government’s push to academise all schools could lead to more educational establishments that hold regressive views.

The whistleblowers have told the Independent that children must sit in specially constructed booths to keep separate and have to teach themselves so they are “closer to god.”

This education movement is thought to have have started in southern US, Accelerated Christian Education (ACE) schools have since expanded to other countries including the UK.

A spokesman for Christian Education Europe told the Independent that all schools are inspected by Ofsted.

He said: ‘All the schools provide Citizenship on the timetable and we embrace British values as part of the school culture. Life with students is experienced beyond the textbook and carried into an understanding that is suitable for modern day Britain.’