British fishermen are enjoying a ‘black gold rush’ as demand for cuttlefish hits all time high thanks to soaring demand from abroad – while it is virtually ignored as ‘too ugly’ to eat here. Fishermen from across the UK are flocking to the South West to land the inky mollusc – which is related to […] 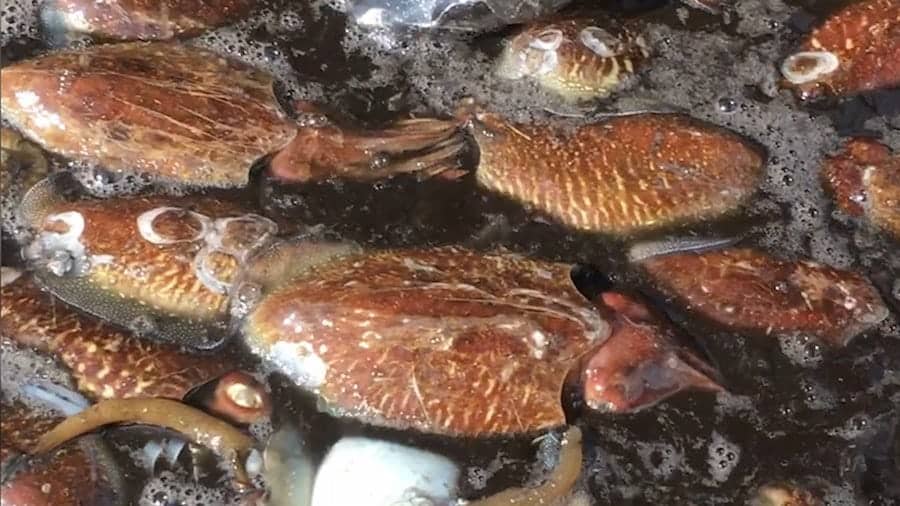 British fishermen are enjoying a ‘black gold rush’ as demand for cuttlefish hits all time high thanks to soaring demand from abroad – while it is virtually ignored as ‘too ugly’ to eat here.

Fishermen from across the UK are flocking to the South West to land the inky mollusc – which is related to the squid – in record numbers.

They are taking advantage of the lack of quotas with 100 tonnes being landed by just five or six boats.

Last week a record £700,000 worth of cuttlefish was put through the tills at Brixham fish market in Devon with prices at an all-time high of £5 a kilo.

Ninety per cent of the catch was stacked into freezer vans and transported to foreign markets.

Cuttles are especially popular in parts of East Asia and China and several countries in Europe including Italy, Croatia, Montenegro and Portugal.

But cuttlefish are virtually shunned at home because of their appearance and many fishmongers regard them as too inky and messy to bother with.

The overseas demand is being driven by declining numbers of cuttlefish in the Indian Ocean fishery.

And struggling British fishermen say they could be an unexpected saviour of the local economy.

Skippers have descended on waters around Brixham from as far away as Scotland and Northern Ireland to take advantage.

Many boats are being double crewed and only resting in port for the bare minimum of time to maximise the amount of they are able to catch.

With the lack of quotas on Cuttlefish, profits made from this season’s catch is hoped to sustain skippers until the annual limits on traditional are announced in January.

Jim Portus, chief executive of the South West Fish Producers Organisation, said Brixham was buzzing with activity and fishermen were like “flies around a honey pot”.

He said: “It is looking like a shuttle service at the moment and there is a real feeling of optimism around the fleet in Brixham and Plymouth.

“We have got fishermen from Newlyn, Scotland and even Northern Ireland trying to catch it – and they are very welcome.

“They are double crewing to allow for a rapid turnover and boats are not spending long in port.

“It is what you might call a bit of a ‘black gold rush’.”

Despite its name, the cuttlefish is actually a mollusc and belongs to the marine group which includes squid, octopus and nautilus.

They have an internal shell, which is sold by pet shops as a sharpening tool for the beaks of pet budgies, as well as eight arms and two tentacles.

Growing as big as 10 kg, they are generally fished in home waters during the winter, though the season began earlier, in August, this year.

Up until the mid-1990s, UK skippers tended to throw them back because there was no market at the time.

But recent attempts have been made to rebrand the cuttlefish locally as “Brixham squid” to try and encourage restaurant owners and consumers to put it on their weekly shopping list.

At the recent Fishstock festival, it reportedly “went down a storm” with “foodies” who snapped up more than £1,000 worth of portions.

Mr Portus says there have been also been moves this week to export into the lucrative Chinese market, through Billingsgate fish market in London.

Crab from Salcombe and Kingswear is already making its way to China and adding cuttlefish to this is being heralded as a welcome addition to an industry which has been struggling for years.

Mr Portus added: “We already have companies like FalFish and Interfish with freezer capacity and if they can get this fresh frozen product into refrigerated containers and across to the Far East that would be a great opportunity to exploit.

“The cuttlefish arrived early this year and hopefully they will stick around until March or April, allowing fishermen to preserve their quotas until later in the year when prices for things like plaice and Dover sole go up.”

Simple lures such as an old bottle with a rubber glove stuck on the end can be enough to attract the sexually voracious creatures, among which females outnumber males by 10 to one.

Mr Portus admits that the cuttlefish, though graceful and beautiful when swimming, can look a bit “disgusting” when dead, stacked up and splattered with the ink they squirt to confuse predators.

He added: “I can attest to the fact that it is great eating.

“You wouldn’t be able to tell the difference between cuttlefish and squid – they are both delicious and nutritious.

“Swimming in the sea, they are beautiful though in the fish boxes ready for market they do look a bit disgusting.

“But if the fisherman can keep filling their boats we may even have some South West quotas left at the end of the year.”