It’s just over a week since The Don was inaugurated 45th President of the United States and that constant clatter you can hear are the pennies dropping for disappointed Donald Trump voters. Already. Yes with historic unfavourable polling for a newly inaugurated President, most voters in a recent poll believed Donald Trump would prove to be […] 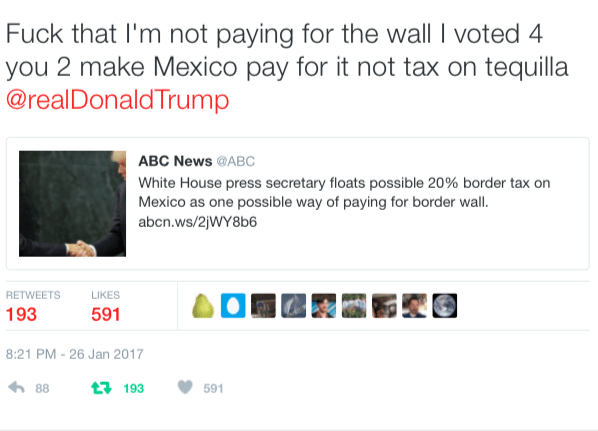 It’s just over a week since The Don was inaugurated 45th President of the United States and that constant clatter you can hear are the pennies dropping for disappointed Donald Trump voters. Already.

Yes with historic unfavourable polling for a newly inaugurated President, most voters in a recent poll believed Donald Trump would prove to be even more unpopular than Richard Nixon.

And the speed with which Trump voters have realised that maybe they should not have voted for the reality TV real estate mogul is so breathtaking that a social media account @Trump_Regrets has sprung up to collate the anger building up on Trump’s favourite medium – Twitter.

Erica Baguma, a student at the University of King’s College in Halifax, Novascotia started retweeting some of the Trump remorse on Twitter and the social media account has escalated so rapidly it’s at 164K followers.

Let’s hope before long it has more than Mr Trump. We don’t know whether to laugh or cry at the array of reasons people have given for their Trumpgret.

Read them and weep:

@realDonaldTrump I voted for you and support you but the Dakota pipeline!? Ever heard of the clean water act of 1972? Dont take their water

I would like my vote back. We never thought we would hearken to the days of the 1930 Germany I will not zig hyle Donald Trump

After realizing I supported and voted for @realDonaldTrump I am never drinking again. Worst drunk decision I ever made. #ImpeachTrump

@realDonaldTrump I voted for you cos I thought maybe it was a good idea to shake things up a bit in politics. Biggest regret of my life!

Mr. president, I voted for you..! Now my wife can't come back after her visit to YEMEN. @realDonaldTrump #NoBanNoWall

@realDonaldTrump I voted for you and you are proving to be a huge disappointment. You cabinet is a joke. Pay for position. Sad dude sad.

@realDonaldTrump I voted for you and did not expect you were such a small minded petulant baby!

@realDonaldTrump 20% tax on Mexican imports? WE the consumers will pay for the wall. Now I voted for Trump but that is just plain stupid! pic.twitter.com/y1tMnmS1Lv

Who cares! I voted for you and you're embarrassing everyone especially yourself! I'm done defending you! You whine so much

OK explain to me why as a Dr for the military you are freezing my job..I voted for you and my wife..

@realDonaldTrump #inauguration You already made it harder for me to buy a house. Thanks for nothing I wish I hadn't voted for you.

I'm pissed @realDonaldTrump is out of touch with the tru middle class. I take my vote back waab. Tru Blonde lol damn

YOU IDIOT. I REGRET VOTING FOR YOU. YOU ARE A CRAZY GUY! GO BACK TO RUSSIA! LEAVE OUR COUNTRY!!!!

.@realDonaldTrump I voted for you but you spend all your time watching TV comedy you don't like & spying for Russia. Wish I had my vote back

Dam starting to regret votin for trump. dude seems wack! lol can i vote again but for jill stine?