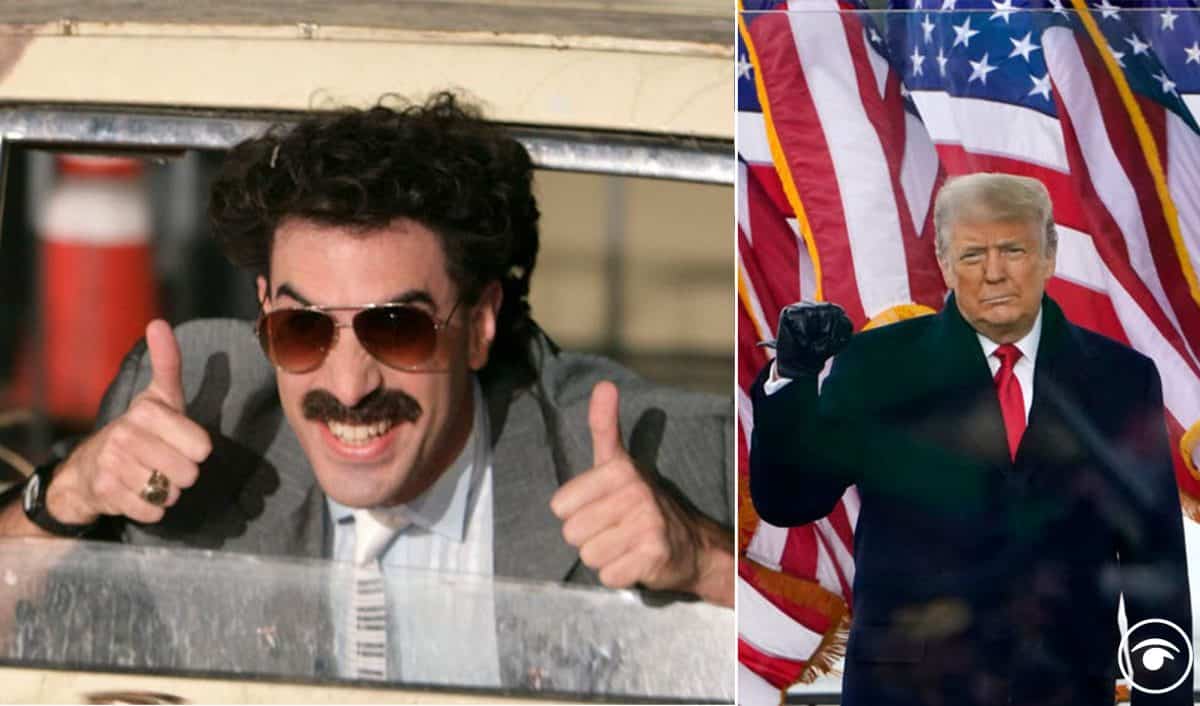 Donald Trump’s Twitter ban has been described as the most important moment in the history of social media by Sacha Baron Cohen.

The comedian, who recently lampooned the president in Borat Subsequent Moviefilm, celebrated the decision by Twitter to suspend Trump permanently and Facebook’s move to suspend his account indefinitely.

“The world’s largest platforms have banned the world’s biggest purveyor of lies, conspiracies and hate. To every Facebook and Twitter employee, user and advocate who fought for this–the entire world thanks you!”

Trump’s permanent suspension from Twitter following the storming of the US Capitol by his supporters marks another significant step in the president’s tumultuous relationship with social media.

Prior to his departure from the 280-character-limit site, Mr Trump had added to his influence after amassing almost 89 million followers across his 59,558 posts.

Here’s a look at the online journey of the man described as the ‘social media president’.

Mr Trump’s favoured platform, he joined the site in March 2009 under the handle @realDonaldTrump and issued his first tweet two months later to advertise an imminent appearance on the Late Show with David Letterman.

He used Twitter to criticise Barack Obama following the Democrat’s re-election as president in 2012.

The following year he began increasing the amount of politically-charged tweets, with former White House press secretary Anthony Scaramucci telling the New York Times that Mr Trump considered the platform essential to his 2016 election as he “felt there was no separation between his brand and the media”.

It was on Twitter that he began to popularise the term “fake news” to describe any coverage critical of him.

After being elected, he used his own Twitter account to announce a number of major political decisions, including policy changes and the hiring and firing of senior government officials.

Mr Trump has been criticised for retweeting or copying material from accounts posting racist, antisemitic or false information. He was condemned for sharing three inflammatory anti-Muslim videos from Britain First in November 29, 2017, with then UK prime Minister Theresa May saying: “It is wrong for the president to have done this.”

Scientific experts and the families of those who died with Covid-19 also criticised the president after he falsely claimed on Twitter and Facebook on October 6 last year that the seasonal flu was more lethal than coronavirus.

The tipping point for Mr Trump’s eventual removal from Twitter came after the site announced on Wednesday that it had locked his account for “repeated and severe violations” of its Civic Integrity policy over the storming of the US Capitol.

On Friday, the site said it had permanently suspended him after a review of two of the his tweets posted that day found they had violated its glorification of violence policy.

A statement posted on Twitter’s blog said it had “made it clear” previously that the President’s account was “not above our rules”, and said it took action “in the context of horrific events” earlier this week.

Mr Trump used Facebook for attack advertisements against his opponent Hillary Clinton in the 2016 election, and returned to the platform to issue an apology for a video in which he advocated sexually assaulting women.

The platform prompted Mr Trump’s ire when its executives told the House and Senate committees investigating Russian interference in the 2016 presidential election that accounts linked to Moscow had bought 100,000 dollars of Facebook advertisements during the campaign.

In a series of tweets on September 27, 2017, the president responded by saying: “Facebook was always anti-Trump”.

On Wednesday, Facebook removed a short video which Mr Trump had posted to his social media accounts.

Facebook’s vice president of integrity Guy Rosen said the action was taken “because on balance we believe it contributes to rather than diminishes the risk of ongoing violence”.

Later that day, the site blocked his ability to post new content. On Thursday it said he would remain blocked until his term in the White House concluded on January 20.

Mr Trump used the photo-sharing site to post images of himself with his family.

He attracted some controversy in 2016, prior to becoming president, when he attacked the relaunched Ghostbusters film over its all-female cast.

The platform has copied the actions of its parents company, Facebook, in blocking Mr Trump from posting until the end of his presidency.

Mr Trump had a vlog of more than 80 instalments on YouTube from 2011 until 2014 titled From the Desk of Donald Trump.

He used these videos to discuss various topics including a potential 2012 presidential candidacy, however these have since been removed from his official account.

YouTube removed the video taken down by other sites amid the Capitol storming, though staff of parent company Google have demanded more.

In a statement, members of the Alphabet Workers Union – who work for YouTube and Google – said the video-sharing site was refusing “to hold Donald Trump accountable to the platform’s own rules by choosing only to remove one video instead of removing him from the platform entirely”.

The platform “will continue to function as a vector for the growth of the fascist movements if it persists in prioritising advertisers while exposing the public”, they added.

The youth-focused site has had the most openly adversarial relationship with the US leader.

On December 8, a federal judge blocked Mr Trump’s latest attempt to ban the popular app as his administration continued to attempt to seize it from its Chinese owners and counter the influence of Beijing.

Since taking office, Mr Trump has waged a trade war with China, blocked mergers involving Chinese companies and stifled the business of Chinese firms like Huawei.

TikTok users claimed a win against the president after his election campaign rally on June 20 in Tulsa, Oklahoma, was hit by a far lower than expected attendance.

But Democratic congresswoman Alexandria Ocasio-Cortez suggested the low numbers were in fact down to a campaign on video-sharing app TikTok.

She tweeted: “Actually you just got ROCKED by teens on TikTok who flooded the Trump campaign w/ fake ticket reservations & tricked you into believing a million people wanted your white supremacist open mic enough to pack an arena during COVID.”

The relatively new social media site has styled itself as an unbiased platform and has become popular with those banned from Twitter.

Mr Trump does not have an account but Parler hosts prominent conservative voices including Texas senator Ted Cruz and Fox News’s Sean Hannity.

Google has suspended the app from its Play Store, with Apple also reportedly removing it from App Store.

In a statement to PA, a Google spokesperson said it had made the decision because it requires “that apps implement robust moderation for egregious content”.

“In light of this ongoing and urgent public safety threat, we are suspending the app’s listings from the Play Store until it addresses these issues,” it added.

– Reddit, Snapchat and Twitch have also all either suspended or banned Mr Trump

Related: Trump’s MAGA mob left behind a disgusting mess in the US Capitol