"Can any climate experts out there tell me if it's a good sign when the bridges are flooding," James Felton said. 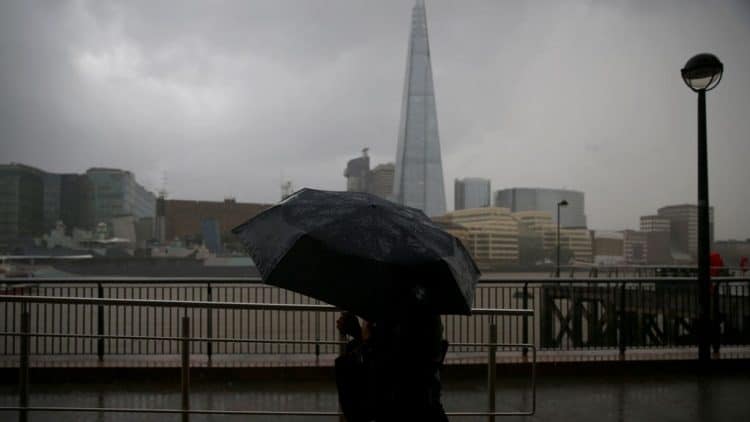 Tower Bridge and its surrounding streets were submerged under water today as central London was hit by torrential rain.

The popular tourist landmark was one of several areas hit by travel chaos as roads and tubes suffered under the heavy downpours.

Footage posted onto social media showed streets turned into rivers, and buses and cars struggling to get across Tower Bridge.

The pummelling came soon after the Met Office had issued a yellow weather warning for most of England and forecast that heavy downpours were likely to continue across much of the country for the rest of the day.

It said there was a chance homes and buildings could be flooded or damaged from as far as London to Hartlepool.

And it added areas in the Midlands and North East may see as much as 70mm of rain over the course of the day.

A spokesperson said “An area of rain is expected to move northeast-wards across much of England on Tuesday, with thunder in a few places.

“Fifteen to 25mm of rain is likely quite widely with up to 40mm in a few places, leading to some flooding and disruption.

“However, there is a small chance that this rain will be especially intense in a few places with 50-70mm possible, and more significant disruption where this occurs.”

The downpours coming just a week after some of the country’s warmest ever autumn nights will be seen as more evidence of the urgent need for action on climate change at the upcoming COP26 in Glasgow.

Ahead of the event, former Labour leader Ed Miliband delivered a blistering speech, calling for immediate action from the top.

Watch his BBC Newsnight appearance below:

“We are in favour of common ownership absolutely… Starmer said this in the leadership campaign – we haven’t changed that commitment.”