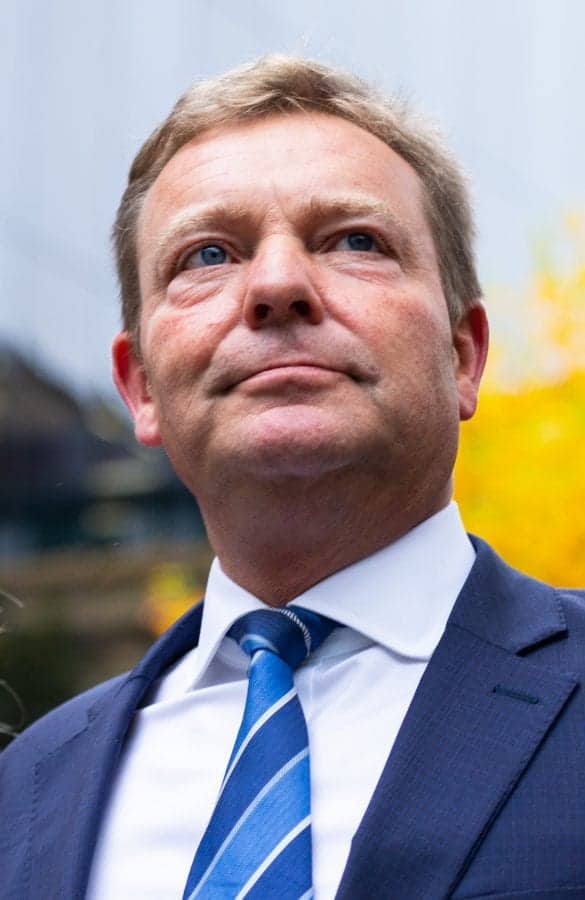 A Tory MP accused of breaking election spending rules to stop Nigel Farage in the General Election 2015 claimed he was “a mere small cog in a gearbox,” a court has heard.

Craig Mackinlay, 52, said he took orders from the Conservative Campaign headquarters – CCHQ – and he had no role in deciding to wheel out the Tory “battle bus,” exceeding spending rules on the campaign in his constituency.

“This was a national idea that originated in HQ. I couldn’t have stopped it,” he told the court.

Mackinlay and his two assistants are of spending over the legal election limit to see off the former UKIP leader’s bid to win the South Thanet seat in Kent.

The legal limit for declared spending on the campaign was set at £52,000.

It is alleged the overspend covered a Tory ‘battle bus’, hotel bills and staff which was not declared, Southwark Crown Court heard.

His barrister Richard Pratt QC asked: “The case against you and you know and understand is that you knowingly made that declaration in respect of the long campaign knowing that it was an incomplete and inaccurate return.”

Giving evidence from the witness box Mackinlay told the jury: “If you’re a new candidate you have to understand the hierarchy in the Conservative Party.

“I was just a mere small cog in a gearbox.”

The trained accountant added he was not consulted on the decision to use a “Battle Bus” to ferry Tory volunteers to help his campaign.

He said: “No. I would have questioned what the value of it is or what it’s worth to the campaign but that’s not how it happened.

“This was a national idea that originated in HQ. I couldn’t have stopped it.”

He answered “no, I didn’t” when asked by Mr Pratt QC: “Did you yourself play any part in the decision made on how much money is spend on what?”

Describing the effect of Nigel Farage’s candidacy on CCHQ he said: “I think it was very important to the national party there had been a rise of UKIP and there are obviously concerns that that may continue.

“I think it caused them concerns about what I had to say, what messages I put out – they had to be compliant with the national message.

“He was a face that everybody knew, he was one of those faces in British politics.”

He described receiving an email from CCHQ telling him she was being sent to South Thanet to help him and Gray as a “bolt out of the blue” in January 2015.

He said: ”I knew she was had a towering reputation in the party and I think I first met her at the Clacton by-election in 2014.

“This was a bolt out of the blue. I had no choice in the matter, it’s one of these things that is done to you from HQ.”

When they met in South Thanet, he said: “It was obvious we hadn’t been complying with all the central office rules and she was somebody who could be a little more flexible in our interface with CCHQ.”

Jurors heard Little sent an email to Tony Salter from CCHQ warning “we are getting perilously close to hitting our legal limits for the long and the short campaigns”.

Mr Pratt said an email from her to Lord Gilbert, the head in the CCHQ team organising the party’s national campaign, discussed presenting the seat as a “two horse race” between the Tories and UKIP.

Mackinlay also said he was not aware Little and the head of legal at CCHQ had been “liaising… so far as the deviation spend between national and candidate?” and was not sent emails detailing what daily activities he was to do during the campaign.

He said he met Little “infrequently” adding: “It was like passing of ships more than anything.”

The MP added he was not consulted on quotes attributed to him in the campaign’s leaflets.

After he was made MP, Mackinlay said he signed a declaration of his campaign expenditure on June 12 2015.

He said he had “no concern at all” when asked if he signed it authorising the itemised spends.

He said: “It seemed very reasonable, I knew that somebody professional had put this together, I had no reason to think otherwise.

“It was down to the pence, I felt assured that it was properly calculated and was accurate.”

Mackinlay denies two charges of making a false election expenses declaration during the campaign which ended with him winning with a majority of almost 3,000.

Little denies three counts of aiding and abetting Mackinlay while Gray denies one of making a false declaration.