Theresa May is busy today, selling arms to a country that will decapitate people for sorcery and witchcraft and also getting very angry about the National Trust not mentioning the word “Easter” enough, for a day out, where kids run about looking for eggs at a stately home. We need all the allies we can […] 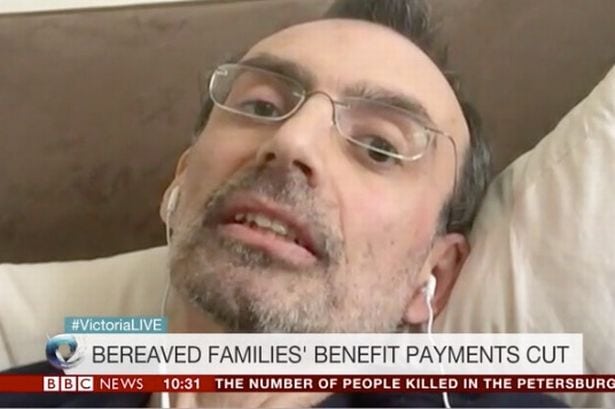 Theresa May is busy today, selling arms to a country that will decapitate people for sorcery and witchcraft and also getting very angry about the National Trust not mentioning the word “Easter” enough, for a day out, where kids run about looking for eggs at a stately home.

We need all the allies we can get, now we have Brexit, and the National Trust doesn’t have much oil. However, back in the UK one family is going through a tragedy, which the government is making worse, adding the families grief.

While all this is going on a 51-year-old father of two is about to die of cancer. This is so tragic for any family, but in this case, if he dies today the family will receive £60k in bereavement payments, but if he lasts another day, the fee will drop to £6k.

Alan, from literally his death bed, told BBC’s Victoria Derbyshire this morning, the predicament he is in. It was saddening to watch and tragic for his family, and it will concern many other people who might find themselves with dying family members in the future

He was given up to five months to live in December, but this Thursday savage cuts to the amount paid out to after the death of loved ones, will mean his family will face a financial struggle, at a very upsetting time.

Alan then admitted he had said to his family “in some ways it wouldn’t be a bad thing to lose me a couple of days early because at least there’ll be more financial support available.”

PM May defended the cuts as “fair.” However, many people will see the predicament this man and his family are in and think otherwise.

The cut will see families lose bereavement payments18 months after a parent has died.

Previously families would get money to support them until a child turned 18 years old.

Dying Alan said: “I made a calculation not long ago regarding how much support would be available to my wife to help raise our young children. And under the current system I calculated it would have been a sum of over £50,000. And under the new system it would reduce to six.

“And I was shocked that a system of benefits that has been in place as I understand for 70 years, since 1946, although it has been renamed, the essence of this support is that when somebody is widowed, there’s financial support available for young children up to the age of 19 or 20.

“And the fact that that’s been taken away seems utterly callous and savage.

“I understand that this is a policy that was not at all mentioned in the Conservative manifesto, as put together by George Osborne as chancellor at the time.

“This policy therefore appears to have no mandate whatsoever and I can only think that some relatively junior minister advised the chancellor at the time because the amount of money that I have already built up in my state pension, through National Insurance contributions is approaching £130,000.

“So even if the existing policy was paid out, it would only represent half of the money that I have put into my state pension.

“So while this is continually referred to as a saving, actually it’s just depriving people of money that they’ve legitimately earned.”