The government refuses to commit a date for a public inquiry into their handling of the pandemic, so we’ve decided to start our own investigation. 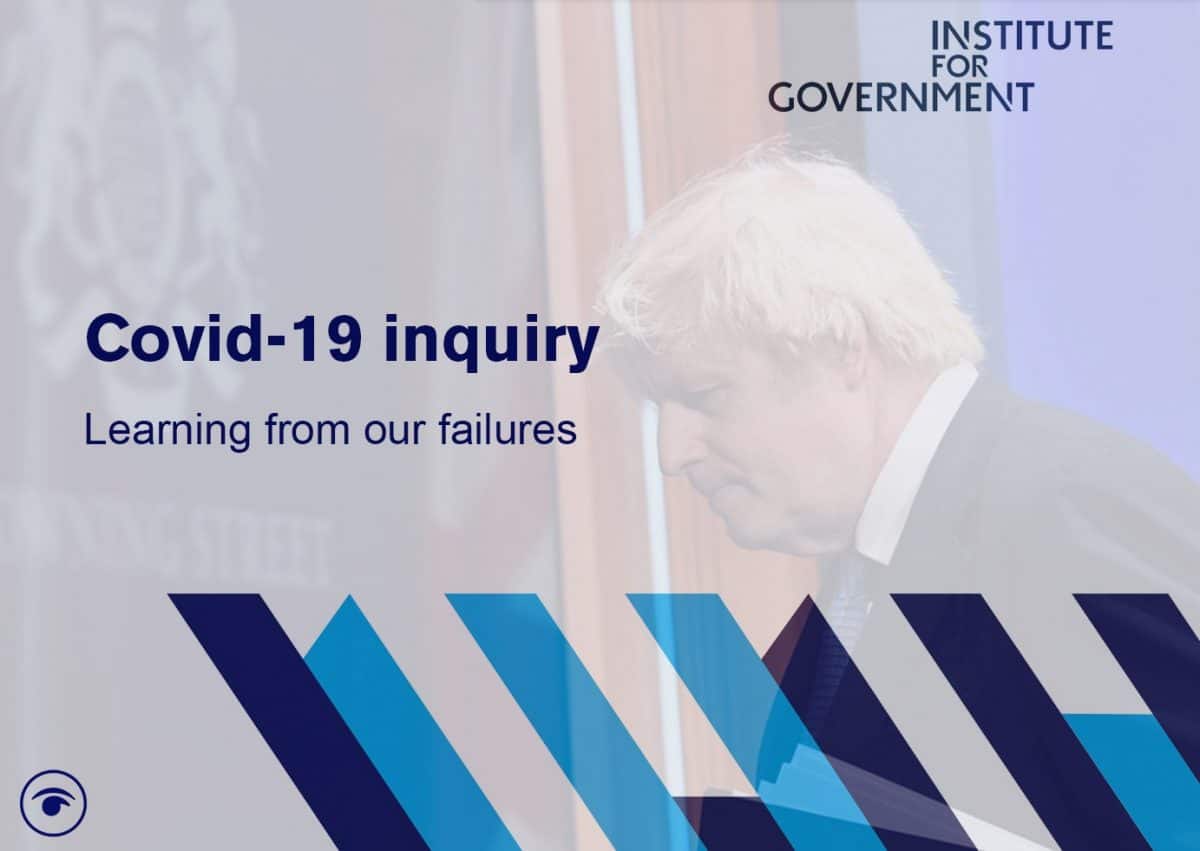 To everyone else who has lived through the pandemic in Britain, that much has been patently obvious. The virus has now killed 150,000 people, the NHS has been overrun with ambulances seen queuing up outside hospitals at Christmas and forced to wait up to nine hours to hand patients over as highly infectious strains of Covid ripped through the south-east.

Yet, the Tories have no schedule to investigate their handling of the pandemic, preferring instead to wait until the opportune moment to examine how they got it so badly wrong.

Thankfully, open sources reveal exactly why Britain has one of the world’s highest COVID death-rates. Publicly-available data shows us that before the pandemic, austerity-pushing Tories were able to:

While during the pandemic, guided by “laissez-faire” capitalism, Team Johnson also:

Here’s our full inquiry into what went wrong:

Labour’s National Security Strategy 2008 predicted that 500,000 could die in a flu-type outbreak. In response, 33 million pieces of PPE were acquired. But shortly before the COVID pandemic, Team Johnson ignored the New and Emerging Respiratory Virus Threats Advisory Group’s warning about depleted stocks.

The British Medical Association advised that under the Tory-Liberal coalition’s (2010-15) Health and Social Care Act 2012, “different areas of the country will develop different ways of dealing with outbreaks … This could lead to inefficiency, duplication of effort and ultimately put lives at risk.” The coalition’s Influenza Pandemic Preparedness Strategy devolved responsibility to NHS England Trusts. Successive Tory governments (2015-present) reduced hospital beds from over 170,000 to 140,000. Eighty percent of hospitals reported shortages of intensive care unit staff and beds.

Operation Cygnus (2014 and 2016) and the Cabinet Office’s National Risk Register of Civil Emergencies (2017) warned that Britain’s lack of pandemic preparedness could kill hundreds of thousands. The Tories responded by slashing local authorities’ emergency planning funds by 35 percent between 2010 and 2019. They also set up a private NHS firm, Supply Chain Coordination Ltd (SCCL), designed to save NHS Trusts £150m a year.

In late-December 2019, China informed the World Health Organization about a novel outbreak.

Between 4-5 January, the WHO alerted the world. The government’s emergency Cabinet Office Briefing Room “A” (COBRA) first discussed the potential pandemic twenty days later on 24 January. PM Johnson skipped at least five meetings and did not chair COBRA until 2 March.

Johnson refused to participate in the EU’s Early Warning and Response System. By 12 January, the WHO had issued extensive guidelines, which Johnson ignored, on how to provide PPE for healthcare workers, test samples, screen passengers, and monitor the virus.

Between January and March, >1,300 travellers unknowingly brought SARS-CoV-2 into the UK from Europe and Asia.

From 17 January, the EU’s Health Security Committee met to discuss PPE. Team Johnson made the “political decision” not to procure from the Committee, in the later-retracted words of the Foreign Office Permanent Secretary, Sir Simon McDonald. Britain missed four of the 12 EU meetings.

On 22nd, the government’s Scientific Advisory Group for Emergencies (SAGE) met for the first time about COVID. There were zero immunologists, molecular virologists, or residential care experts on the team. Lancet editor, Richard Horton, says that SAGE models excluded testing, tracing, and quarantining. Dr. Horton argues that the strategy should have been total viral suppression, but ended up as management. “[I]t didn’t recognise that 20 per cent of people infected would end up with severe critical illness. The evidence was there at the end of January.”

Despite these limitations, early SAGE reports noted that cases could double every three days. The government ignored SAGE’s advice to assume that travellers were infections.

The tests: Underfunding then blaming

Public Health England (PHE)—set up in 2013 and reliant on local funding—was scapegoated.

The private supplier SCCL let 200 million vital pieces of equipment expire. Experts note that test-kit “accuracy depends on the skill with which it is administered.” Leaked PHE memos reveal that “shortages of swabs and transport led to local variations in the way the [national testing] has been run.”

PHE immediately tested UK arrivals, but cautioned that coronaviruses have a 14 day incubation period. Instead of passing laws requiring travellers to test and quarantine, the government made the measures voluntary while publicly downplaying the risks.

Experts said that, had the UK’s 44 molecular virology labs been allowed to work together sooner than March, testing capacity would have been comparable to Germany’s. Months into the pandemic, PHE had the capacity to test 35,000 people a day, only half of whom were being tested by late-April.

£37 billion-worth of track-and-trace contracts were handed to cronies to build a new system—NHST&T—when focus could have been on expanding PHE. The Public Accounts Committee cites “no clear evidence to judge NHST&T’s overall effectiveness” or “specific contribution to reducing infection levels.”

Johnson consciously prioritised corporate profits, telling an audience on 3 February: “when there is a risk that new diseases such as coronavirus will trigger a panic and a desire for market segregation … humanity needs some government …  ready to take off its Clark Kent spectacles and leap into the phone booth and emerge with its cloak flowing.”

On 25 February, leaked modelling from the government’s National Security Communications Team (NSCT) predicted that 500,000 could die.

Despite the warning, Johnson told the public to “go about business as usual.” It is likely that Johnson personally spread COVID. On 3 March, he told reporters: “I was at a hospital the other night where I think there were actually a few coronavirus patients and I shook hands with everyone.” An attendee of early COVID briefings said that this showed “his lack of understanding of the severity of what was coming.”

By 10 March, as COVID infected Cabinet members, Johnson attempted to instil fatalism in the public: “many more families are going to lose loved ones before their time.” Super-spreader events, the Cheltenham Festival and Liverpool v Atlético Madrid, went ahead.

On 19 March, the government downgraded COVID from a high-consequence infectious disease. Lockdown was legally enforced on 26th, when the daily average was over 2,000 cases. By May, the death toll in England and Wales was 40,000. Had lockdown been imposed one week earlier, an estimated 21,000 lives would have been saved.

A third of carehomes in the Humber, South East, and Yorkshire are below standard, as are a fifth of London carehomes. Experts report that: southeast homes saw nearly 18 per cent of COVID carehome deaths; northwest >15 per cent; Yorkshire and the Humber >11 per cent. Other regions had around 10 percent each.

Despite many COVID carriers being asymptomatic, the government changed carehome guidelines on 13 March 2020 to allow carers to work with asymptomatic residents/patients without PPE.

Overstretched GPs issued carehome staff with blanket “do not attempt resuscitation” orders, including for residents with autism and learning difficulties. The decision led to what the Care Quality Commission calls “potentially avoidable death[s].”

Between mid-March and late-April, Team Johnson freed NHS beds by allowing 25k untested, potentially COVID-infected patients to be discharged into carehomes. Keir Starmer says the government “actively seeded this into the very population that was most vulnerable.”

Austerity was unevenly distributed, with certain regions like northern cities, hit harder than others. The number of people with incomes below the poverty line increased from 2.8 million in 2000 to 4.5 million by 2020.

In September, secret PHE memos said that four out of the five worst-affected areas were in England’s northwest. Bolton, Manchester, Oldham, Rochdale, and nine out of Greater Manchester’s 10 boroughs “never really left the epidemic phase.” Southampton, for instance, had 3.2 cases per 100k people: Bradford had 63.2. The northwest, East Midlands, and Yorkshire and Humber “fail[ed] to return to a near zero Covid status even during lockdown.”

Nineteen percent of white families live in poverty compared to 46 per cent of Black African Caribbean, 39 per cent of Asian, and 32 per cent of “mixed” families.

COVID comorbidities include high blood pressure, type-2 diabetes, and coronary heart disease. By 2017, age-adjusted prevalence of hypertension was 42 percent in England, one of the highest in Europe. But treatment was 25 percent, one of the lowest. High blood pressure affects one in four British adults, but Black people are three times more likely than whites to develop both coronary disease and type-2 diabetes.

The above factors are linked to poverty and stress: both of which affect ethnic minorities more than whites due in large part to systemic racism. Prior to the Kent Variant, ethnic Bangladeshis had twice the proportional death rate of whites. Fifteen per cent of critically ill patients were Asian and nearly 10 per cent were Black.

By post-lockdown September, the daily infection rate was back to 1k. The August-long “Eat Out to Help Out” (EOHO) increased the rate of country-wide transmission by at least 8 percent. Dr. Thiemo Fetzer of Warwick University says that the scheme “contributed to the start of the second wave.”

In September, a strain called the B.1.1.7 or Kent Variant, likely mutated in a prison on the Isle of Sheppey, infected one of the officers, and rapidly spread across the mainland.

On 5 November, with 24k daily cases, the second “mini lockdown” was imposed, ending on 2 December with 60,000 dead. The daily case rate was 16k. Nature reported that tracers were contacting just “one in eight people who test[ed] positive.”

Between the second and current lockdowns, 100 million hospitality sector check-ins were recorded by NHST&T (e.g., people going to the pub). But only 284 alerts were sent to 276 venues. As money for track-and-trace went to consultants, leaked reports cited “capacity issues at a local level.”

Conclusion: What can we do?

There is much more to say: the mask mandate delay until July, screening passengers as late as October, and frontline worker deaths, especially of ethnic minorities. But that requires a full inquiry, including a tailored approach to each country of the UK. This report has sketched a preliminary picture.

From the outset, Team Johnson could have learned about the benefits of hard, early lockdowns from New Zealand; the need for excess hospital capacity from Germany; the importance of masks from Hong Kong; and the way to track-and-trace from South Korea.

Johnson lost control of the virus and his medical advisers now expect COVID to be endemic, like seasonal flu.

Grassroots pressure and voting out this regime, starting with the coming local elections, are the first steps. Although many are disappointed by Keir Starmer’s rightward drift, Labour policies remain worlds apart from the dangerous kleptocracy that has become the Conservative Party.