Robinson, real name Stephen Yaxley-Lennon was jailed for nine months for contempt of court nearly jeopardising a set of trials. 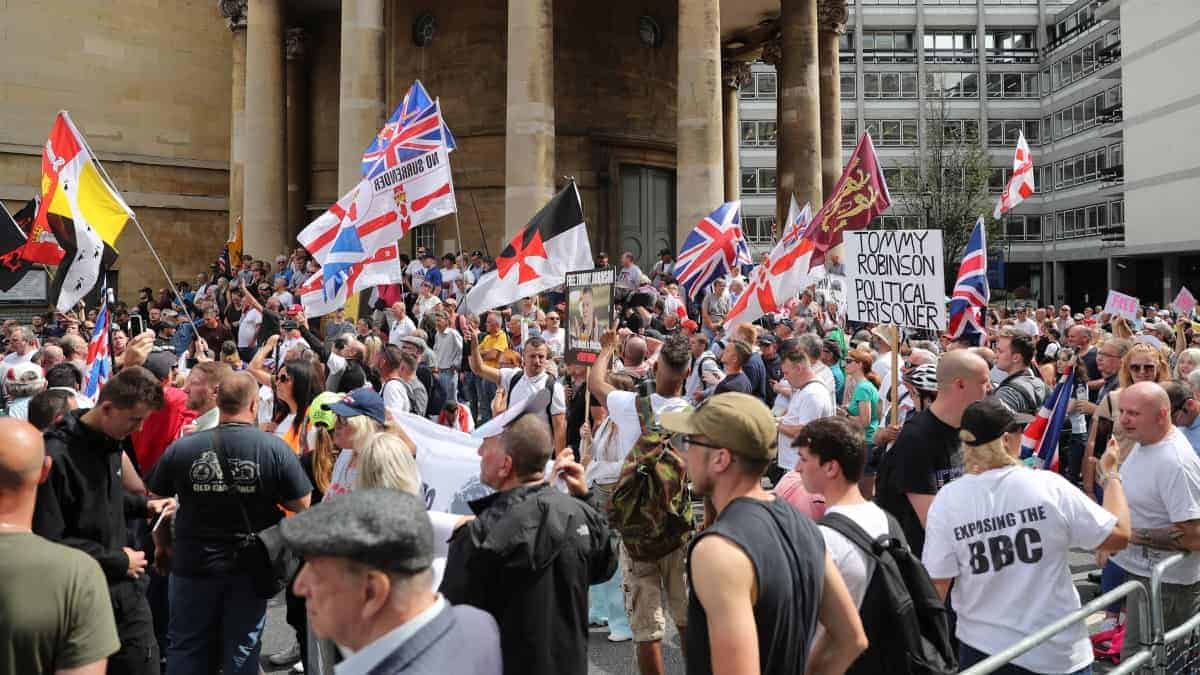 Supporters of jailed Tommy Robinson gathered in central London for a rally calling for him to be freed from prison.

Strict conditions were imposed by police on the demonstration and a counter demonstration planned by Stand Up To Racism, limiting the groups to specific areas and a certain time period.

Demonstrators carried England and Union flags, umbrellas with Robinson’s name on them and sang “We want Tommy out” as they congregated in a busy Oxford Circus on Saturday.

Shoppers, tourists and people out for lunch stood and watched from the pavements with some filming on their phones as the protesters chanted “Whose streets? Our streets” while moving down Regent Street.

There were some tense exchanges with police before the march set off and a large number of officers lined the route as the singing demonstrators made their way towards All Souls Church in Langham Place, near BBC broadcasting house.

Ahead of the protests the Metropolitan Police warned that anyone breaching the conditions set for the demos could be arrested and prosecuted.

Commander Kyle Gordon, Gold Commander for the operation, said: “If you wish to protest on Saturday, I ask that you do so lawfully and within the restrictions set out above, no matter what your view. Anyone breaching these conditions will be liable to arrest and prosecution.

“I have a full policing operation in place and we will be proactive in ensuring any impact on our communities is minimised, while ensuring anyone who is intent on violence is dealt with swiftly and robustly.”

Robinson, whose real name is Stephen Yaxley-Lennon, was handed a nine-month sentence at the Old Bailey last month – of which he will serve just nine-and-a-half weeks – after he was found to have committed contempt of court.

The 36-year-old, of Luton, Bedfordshire, had filmed men accused of the sexual exploitation of young girls and live-streamed the footage on Facebook, in breach of a reporting ban, outside Leeds Crown Court in May 2018.

The judge said Robinson’s conduct had amounted to a “serious contempt” and involved “reckless disobedience” of an important court order, imposed to protect a trial and a later linked trial.

Organisers from Stand Up To Racism said they planned to gather to show that “Robinson and his followers are not welcome in our streets”, accusing him of seeking to “divide and rule our multicultural society”.