Lawyers successfully applied for an order requiring Robinson to return to the High Court in London to answer questions about his finances. 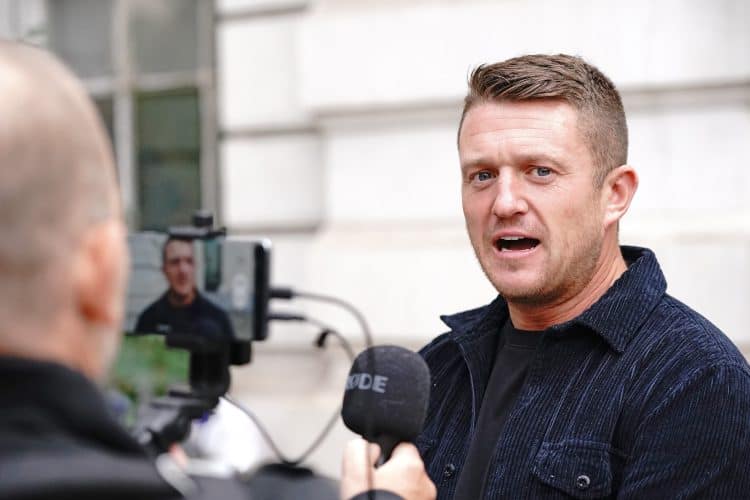 Tommy Robinson is due to appear at the High Court to be questioned about his finances after he lost a libel case brought against him by a Syrian teenager.

Robinson – whose real name is Stephen Yaxley-Lennon – was sued by Jamal Hijazi after the then 15-year-old was assaulted at Almondbury Community School in Huddersfield in October 2018.

Shortly after a video of the incident went viral, Robinson claimed in two Facebook videos that Mr Hijazi was “not innocent and he violently attacks young English girls in his school”.

In the clips, viewed by nearly a million people, 39-year-old Robinson also claimed Mr Hijazi “beat a girl black and blue” and “threatened to stab” another boy at his school – allegations found to be false last summer.

After a pre-trial hearing in the libel case in November 2020, Robinson was ordered to pay £43,293 in legal costs.

However, at a hearing in March 2021, Robinson said he was bankrupt.

Last month, Mr Hijazi’s lawyers successfully applied for an order requiring Robinson to return to the High Court in London to answer questions about his finances.

Ian Helme said Robinson owes a “substantial sum” and that they intended to question Robinson “with a view to establishing what steps would be most proportionate to take with a view to maximising recovery”.

He later told the court that Mr Hijazi’s lawyers had information “that what is stated in his bankruptcy application is not a full account of (Robinson’s) assets”.

While damages and legal costs from the libel trial were not mentioned, the former refugee was awarded £100,000 in damages and Mr Hijazi’s legal costs were thought to be more than £500,000.

Judge John Dagnall ruled Robinson should return to court, finding there were “legitimate purposes” for making the order.

Tuesday’s hearing in front of Judge Dagnall is due to begin at 2pm.