She said her daughters were "always proud of their mum for completing a degree with all the struggles of raising children and her family.'' 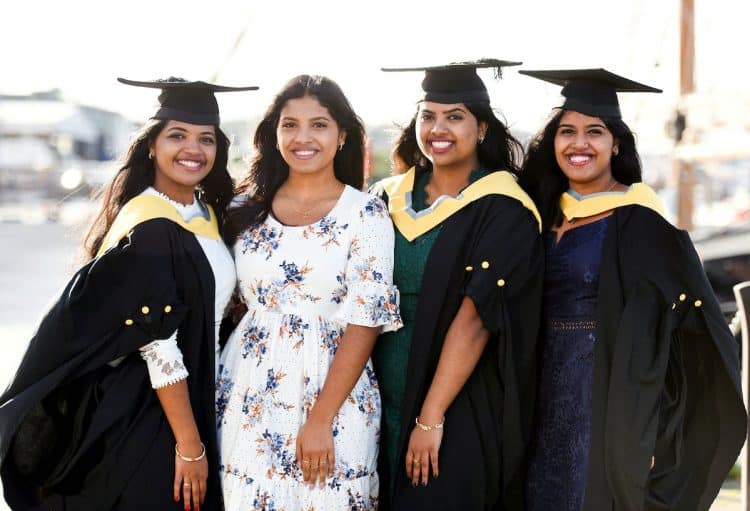 Three of four quadruplets who are following in their mother’s footsteps by working in the NHS have graduated from university.

The 21-year-old quad’s mother Joby Shibu Mathew is a nurse at Ipswich Hospital.

Daughters Anjel, Aneetta, Aleena graduated from the University of Suffolk on Thursday.

They are working as fully qualified nurses at Royal Papworth Hospital in Cambridge.

Sister Aneesha qualified as a physiotherapist at the University of East Anglia in Norwich, and now works in Kettering, in Northamptonshire.

She joined her three siblings at their graduation.

Aleena said: “A few years back when mum graduated as a nurse from the University of Suffolk, I asked if I could wear her gown.

”She said ‘one day you will get here as well’ so today, I have reached that milestone.

”It’s a challenging course but you definitely get a lot of joy out of it. We were all pleased that we were able to go to the same university.”

Anjel said “I feel amazing. It’s been a big journey to get here. It’s great seeing everyone today. It’s an exciting day celebrating with my sisters.”

Aneetta said, “I had my sisters by my side throughout which made a big difference.

‘They were there as a support mentally and through all the work too especially reflecting back at the end of the day of a covid shift.”

The Shibu Mathew family are originally from Kerala, in southern India, where all four daughters were born in 2000.

Joby and her husband Shibu moved to the UK in 2007 and their daughters followed in 2008.

“After moving to the UK, I had to complete my nursing degree again between 2014 and 2017, and I got a job at Ipswich Hospital as an oncology nurse.”

She said her daughters were “always proud of their mum for completing a degree with all the struggles of raising children and her family.”