Omicron infections are surging in London, with the capital's low vaccination rate possibly to blame. 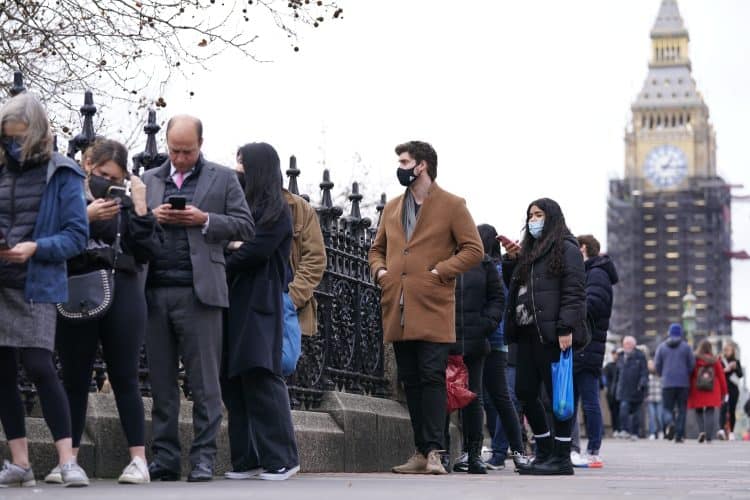 A third of people in London have not had any Covid jabs, even as a surge of Omicron infections sweeps the capital.

The proportion of the population without a single vaccine is three times higher in London than in the country as a whole – and the 14 areas with the lowest vaccination rates are all London boroughs.

In Westminster alone, four-in-ten people have not had a single Covid jab.

Low levels of vaccine coverage could be contributing to a surge in Omicron, which is gripping the capital. More people are now thought to be getting infected with the new variant than with Delta.

A staggering 12,832 cases were reported yesterday – and numbers are set to double in a week.

Although Londoners tend to be younger on average than the rest of the country, people in the capital have lower vaccination rates in every age group.

And the Prince of Wales yesterday spoke out against anti-vaccination conspiracies, as he thanked volunteers and NHS staff at a vaccination centre in south London. “It is so frustrating, all these nonsense conspiracy theories,” he said.

Professor Paul Hunter, an epidemiologist at the University of East Anglia, said London’s lower take-up was “probably due to a number of things”.

He told The Times: “London has an ethnically diverse population and it has been difficult to roll the vaccine out to some ethnic groups, so I’m sure that’s part of it. There’s a lot of poverty in parts of London, and that sort of thing also impacts on the take-up of vaccines.”

One of the biggest gaps is among those aged 1824, where London’s 58 per cent is 19 points lower than the 77 per cent seen in the South West.